The origins of the Ursulines in Europe

The Company of St. Ursula was founded by Angela Merici in 1535, at Brescia, Italy, to promote Christian values within the family, society and the Church. After the Council of Trent, the Company was restructured to become a cloistered order, devoted primarily to educating young girls. Ursuline convents soon sprang up across Europe, in particular throughout France.

The establishment of the Ursulines in New France

In 1639, Madame de La Peltrie financed the founding of a convent and the first school for girls in New France. She left France aboard the St. Joseph with three nuns from the Ursuline convent at Tours: Marie (Guyart) de l’Incarnation, who was canonized by Pope Francis in 2014, Marie de Saint-Joseph and Cécile de Sainte-Croix. They, along with a group of Augustinian nuns, endured an arduous crossing that took three months. 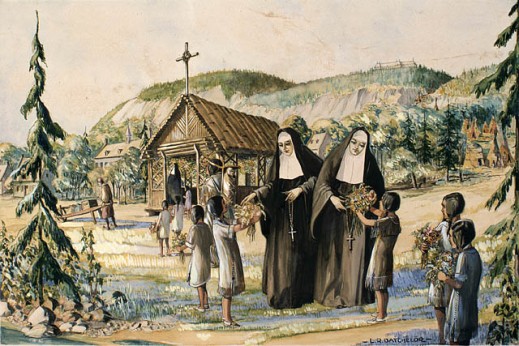 The first Ursuline school, established in Quebec City’s Lower Town, received about 18 French and Amerindian boarders. Like their Augustinian counterparts, the Ursuline Sisters moved to the Upper Town in 1642, to a site their order still occupies today. The Ursulines provided accommodation for the Filles du Roi when they first landed in Quebec City, as well as for English captives in the early 18th century. One of those captives was Esther Wheelwright, who would eventually become the community’s superior. From Quebec City, the Ursulines expanded to found convents and schools around Quebec and New Brunswick, as well as in Japan and Peru.

Library and Archives Canada has a number historical documents on the Ursuline community, mainly in the Fonds de la Congrégation de Sainte-Ursule and the Marie de l’Incarnation Fonds. You can also do an archives search to find other documents or images. For a definitive history of the Ursulines (in French only), we recommend Les Ursulines de Québec 1639–1953, by Dom Guy-Marie Oury.