Early in the Second World War, Germany invaded and occupied many of its neighbouring countries in Europe. Critical supplies and war materials were transported over the Atlantic Ocean to maintain the Allied war effort in England during this time. However, the Battle of the Atlantic, where Allied supply convoys played cat and mouse with German submarines, raged at a dangerous level.

Lucy Maud Montgomery, was born in Prince Edward Island on November 30, 1874 and lived there until her marriage in 1911 to Reverend Ewan Macdonald.

Montgomery began her career writing for Canadian and American children’s magazines. Her first novel, Anne of Green Gables, published in 1908 brought her immense international fame. Anne of Green Gables was published by L. C. Page and Company of Boston, Mass., which published another seven of her books before she left them over legal matters and lawsuits in 1917. She turned to Canadian publisher McClelland Stewart and American publisher Frederick Stokes in 1919. During this time period, L. C. Page published a collection of short stories in their possession, Further Chronicles of Avonlea, spurring another lawsuit.

By the time she died in April 1942, Montgomery had published 22 novels and books of short stories, articles, and a book of poetry, The Watchman, and Other Poems. She also had a portfolio of unfinished poetry. Despite her international fame and success, Montgomery was disappointed that her poetry was not as well received as her popular novels that she sometimes referred to as “potboilers.”

Library and Archives Canada has resources available in:

Library and Archives Canada (LAC) is presenting a series of galleries consisting of photographs of residential schools, federal day schools and other similar institutions attended by First Nation, Inuit and Métis children in Canada from the late 19th century to the 1990s.

Organized by province and territory, the images featured in these galleries derive from many collections held at LAC—both government and private—and represent a selection of our holdings. The majority of the photographs were taken by federal government employees who worked for the former Department of Indian Affairs and Northern Development. You can find photos of residential and federal day schools in Accession 1973-357, RG85 and RG10. Use Archives Search—Advanced to search for additional images not included in the galleries.

Photographs of the students, staff and schools are also found in a number of private collections—Henry Joseph Woodside, Joseph Vincent Jacobson, Kryn Taconis and Charles Gimpel—to name a few. 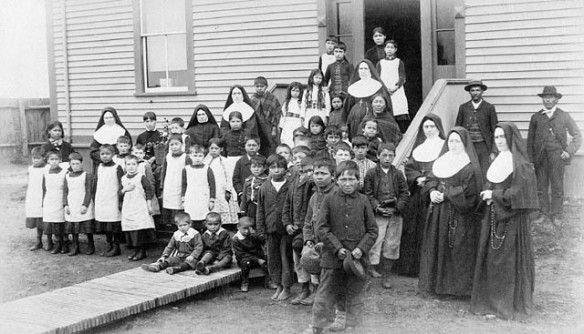 You can access additional photographs of Indigenous students and schools using Collection Search. For tips on searching the database, see the Online and non-digitized photographs section in Residential School Records Resources under What is found at Library and Archives Canada.

In your hurry to start reading a new book, you may occasionally have noticed on the back of the title page a rather strange arrangement of words and numbers headed by the caption, “Library and Archives Canada Cataloguing in Publication Data.”

Did you ever wonder why and how Library and Archives Canada (LAC) puts its stamp on your personal reading material, and on pretty much every publication published in Canada? The answer is simple. Cataloguing in Publication, or CIP as it is commonly known, is prepared by librarians ahead of a book’s launch date. CIP allows Canadian libraries to pre-order a book, catalogue and classify it quickly, thus putting it into the hands of library patrons faster than if each library had to do all the cataloguing and classification work themselves.

Nearly 9,000 new Canadian publications a year are catalogued by the CIP team, a group of about ten cataloguers in LAC’s Description Division. The team works closely with dozens of publishers across the country in an effort to share metadata about Canadian books worldwide. The Canadian CIP Program, which has been in existence since the 1970s, is one of the great success stories of LAC, and one that keeps repeating itself, one book at a time.

To find out more about the program, visit Cataloguing in Publication.

Retired Collections Manager of Artworks Gilbert Gignac and Art Archivist Mary Margaret Johnston-Miller, both from LAC, join us to discuss William Hind, an artist who played a key role in the development of art in Canadian society. We explore who William Hind was, his unique contributions to art in Canada, and what is included in LAC’s William Hind Collection.

Subscribe to our podcast episodes using RSS or iTunes, or just tune in at Podcast–Discover Library and Archives Canada: Your History, Your Documentary Heritage.

In 1862, artist William Hind joined the Overlanders, a group of gold seekers who crossed the Prairies in search of gold in the Fraser and Cariboo regions. During the trip, Hind produced a sketchbook documenting the group’s travels and some of the difficulties they faced along the undeveloped trails of the West.

A false portrait is an imaginary portrait, usually of a well-known or famous person. The portrait is usually not based on a true likeness and is often created long after the person’s death.

Extremely significant historical figures often did not sit for portraits during their lifetimes. Yet, there has always been a demand for “true” portraits of them.

False portraits were not necessarily attempting to trick or fool people—in many cases, those who created or promoted them did so for very public-spirited reasons. From the 19th century onwards, this famous false portrait of Samuel de Champlain, the founder of Quebec City, served an important commemorative and educational role. 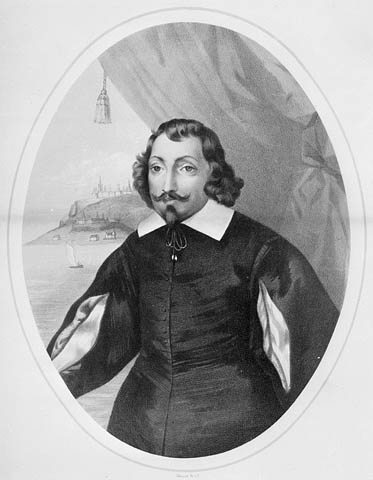 A false portrait often tells us a lot more about the society that created it than about the historical figure that it is meant to represent. It has been suggested that this pious-looking image made the perfect frontispiece to 19th-century histories of New France, developed by historian-churchmen. It doesn’t seem to have mattered that the portrait is actually copied from a 17th-century engraving of a French civil servant, whose morality was dubious (in French only).

Library and Archives Canada (LAC) holds other intriguing false portraits in its collections. For example, LAC acquired this rare miniature wax portrait, one of very few portraits in this fragile medium to survive. 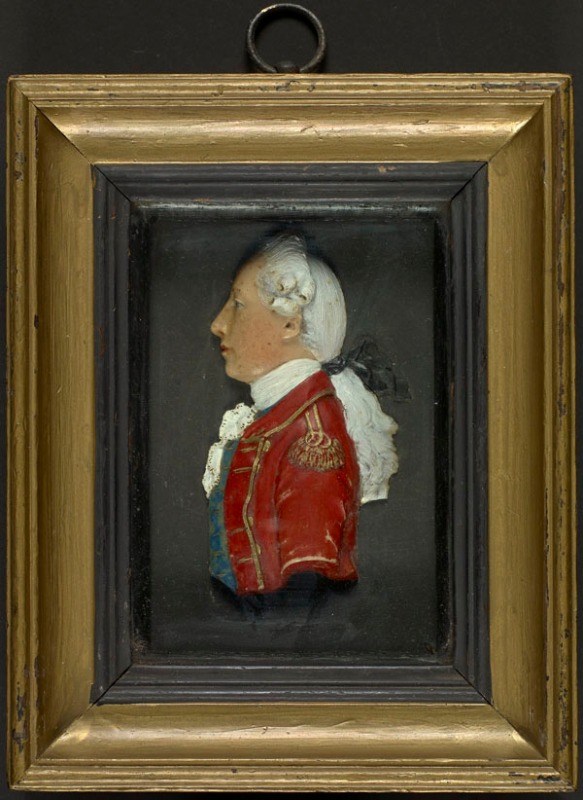 Though labelled a portrait of General James Wolfe, famous for his role during the decisive Battle of Quebec (1759), the miniature does not reproduce any of Wolfe’s known physical features. Yet several near identical wax miniatures exist in other collections—each of these also labelled, in the past, as Wolfe portraits. It’s possible to speculate that many casts of this portrait must have been made, for so many fragile examples to have survived.

Wax was cheap and easy to produce in multiple copies. The portrait was likely created as a kind of mass-produced celebrity image, in response to a vast appetite for portraits of “Wolfe the Hero” that arose among the general public during the 19th century. Probably created long after Wolfe’s death by an anonymous entrepreneur, it presents an idealized and heroic-looking profile view of a young officer—exactly the kind of image guaranteed to satisfy the public imagination.

Canadian hockey stars were not immune to the call to duty when the First World War erupted in 1914. In fact, the strong young men who made up teams across the country represented the prime demographic for potential soldiers and helped promote the war as the ultimate game an athlete could play.

Developed in partnership with the Hockey Hall of Fame in Toronto, the new exhibition Hockey Marching as to War: The First World War and a Century of Military Ties to the Game recounts how the First World War impacted hockey players and transformed organized hockey during and after the war.

The 228th Battalion (Northern Fusiliers) was formed in 1916 and fielded a battalion hockey team who played for the National Hockey Association (NHA). The battalion included 12 professional or semi-professional hockey players. Ultimately, the team was a publicity stunt used to encourage recruitment, to boost morale and to deal with the shortage of players in the NHA during wartime.

But when the battalion was eventually called to the front, scandal erupted as it was revealed that some players were promised they would never have to go to war. Those players who went abroad found themselves assigned to a construction unit, building rails for the next two years.

Hockey legend Conn Smythe enlisted in 1915, a week after winning the Ontario Hockey Association championship. Smythe served in the Canadian Artillery, earning the Military Cross, before being transferred to the Royal Flying Corps in 1917. He then served as an airborne observer until being shot down and captured. Despite two escape attempts, he spent more than a year in a German prisoner-of-war camp. Smythe would later go on to become principal owner of the Toronto Maple Leafs.

“One-eyed” Frank McGee, as he was known, enlisted in the army in 1914 despite having lost his left eye more than a decade earlier. McGee supposedly bluffed his way through the medical exam by trying to memorize the vision chart with his good eye. The doctor wrote “good” on his medical chart for McGee’s right eye, but left the assessment of his left eye blank—perhaps not wanting to tell the league’s top scorer that he was unable to fight for his country.

In August 1916, McGee joined the Battle of the Somme and died one month later when he was hit by enemy shrapnel. A passage in his obituary read:

“Canadians who knew the sterling stuff of which Frank McGee was made . . . were not surprised when he donned another and now more popular style of uniform and jumped into the greater and grimmer game of war. And just as in his sporting career he was always to be found in the thickest of the fray, there is no doubt that on the field of battle Lieut. McGee knew no fear nor shunned any danger in the performance of his duty.”

If you’re in Toronto, check out the exhibition at the Hockey Hall of Fame until February 2015!