Before the development of syllabic writing systems, Indigenous peoples transmitted cultural knowledge orally, through wampum belts and totem poles, through rock engravings and paintings, and through hieroglyphs (symbols etched on birch bark or hides to represent a word or concept). Syllabic scripts were the first form of Indigenous writing whereby anything that could be spoken in an Indigenous language could be transcribed.

Reverend James Evans, a Methodist missionary, has often been credited with developing the first Indigenous syllabic script in 1839 or 1840 at Norway House in what is now Manitoba. Before the use of syllabics, missionaries and linguists translated religious texts into Indigenous languages using the Roman alphabet. Evans wanted his Cree parishioners to learn how to read and write, but he found the Roman alphabet limiting. As a result, he set out to develop a writing system that more accurately represented the sounds and words of the Cree language. 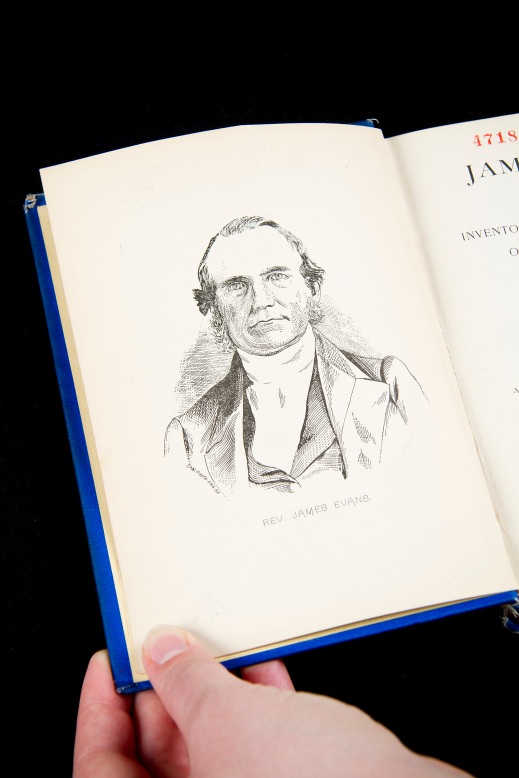 A portrait of James Evans, creator of Cree syllabic, taken from the 1890 book, James Evans: Inventor of the Syllabic System of the Cree Language (AMICUS 6941574)

Evans derived his syllabic script from Pitman’s shorthand (a shorthand phonetic system that used symbols to represent sounds) and Braille (an embossed writing system for the visually impaired). He used nine geometric shapes to denote consonants, and their orientation suggests the vowels that follow. In addition to being the first Indigenous syllabic script, Evans’ syllabic is also the first Canadian script and the first typeface created in Canada. He recycled metal for typecasting from the linings of Hudson’s Bay tea chests and modified a fur press (for flattening pelts) to use as a printing press. Evans and his parishioners used the script to print religious texts on birch bark, deer hide and paper. 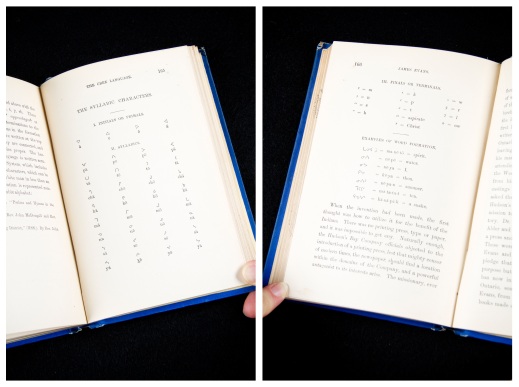 Images from the 1890 book, James Evans: Inventor of the Syllabic System of the Cree Language (AMICUS 6941574) showing the syllabic geometric shapes denoting consonants and their various orientations denoting vowels.

Although originally developed to write religious materials, syllabic scripts were used by the Cree people for their own purposes. Syllabics became an important part of Cree identity, despite having been developed by a non-Indigenous missionary, and is still used in Canada today.

When Nunavut was established in 1999, the territorial government commissioned William Ross Mills of Tiro Typeworks to develop digital syllabic fonts. The results included the Pigiarniq and Euphemia fonts. Euphemia, which includes the entire range of Canadian syllabics in several different Indigenous languages, was licensed by Microsoft and Apple and is now standard on computers. This effectively enables Inuktitut speakers to sit down at virtually any computer around the world and start typing in their own language. 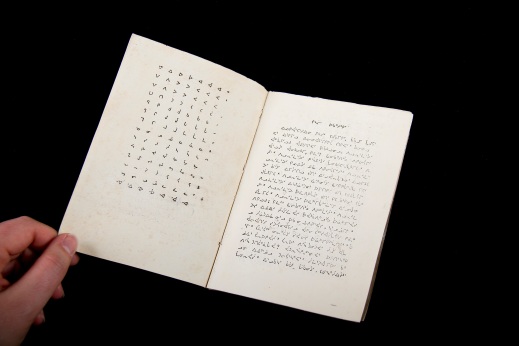 The first book in Inuktitut to be printed using syllabic characters, Selections from the Gospels in the Dialect of the Inuit of Little Whale River, printed by John Horden between 1855 and 1856 at Moose Factory, Ontario (AMICUS 13853827)

For more information on Canadian Indigenous syllabic scripts, please check out the following resources. Most are available in libraries or online.