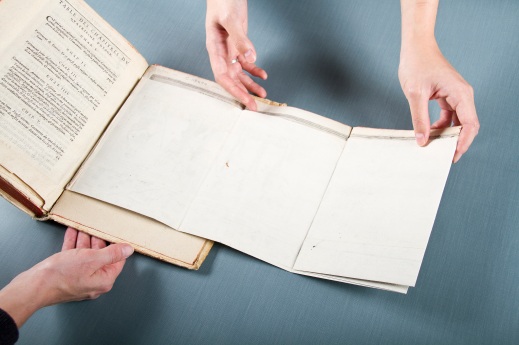 Explorer Samuel de Champlain saw Canada as a land of potential. He published this book, with an eye-catching map, to advertise its possibilities to investors. The beautiful drawings of plants are probably his own.

My job involves taking care of LAC’s Rare Book Collection. This basically means knowing what’s in the collection (on a general level—sadly, I cannot claim to know every single book) and helping people access it, whether by answering questions, making sure things are properly described, helping identify items that need conservation treatment, working on exhibitions, or writing posts like this to help promote LAC’s treasures. The Rare Book Collection is full of a wide range of very interesting things, from old, leather-bound books to comics. This gives me the opportunity to explore numerous aspects of the history of books and publishing. I think I’m pretty lucky to work with such fascinating material. The entire collection is great, but I have especially enjoyed getting to know the comics over the last few years. During my library training at the University of British Columbia, I worked comics into as many of my assignments as possible, so it seems appropriate that I ended up in a place with such a big comic book collection.

The map is in the explorer’s Voyages of 1613. This book is Champlain’s account of the four voyages he made to northeastern North America between 1604 and 1613. LAC’s copy of this book is an outstanding example of historical bookbinding. Until the middle of the 19th century, books were usually sold unbound, and it was up to the owner to find a bookbinder who could make a cover and put the whole thing together. This explains why, when you see multiple copies of the same old book together, they tend to look quite different. On top of this, an old book often gets rebound at some point during its lifetime, and it’s not uncommon to find a pre-1850 book in a binding that was made well after its original publication. Part of what makes LAC’s copy of the 1613 Champlain so significant is that it does appear to be in a contemporary binding, meaning that it has never been rebound, and its cover is roughly the same age as the printed pages inside. LAC’s conservators believe that the cover leather is made from the skin of a deer. This is fairly unusual—the skins used most frequently in bookbinding are sheep, calf and goat. The binding is decorated with designs pressed into the leather using metal tools somewhat similar to the rubber stamps we have today. This type of decoration is referred to as blind tooling: there is no colour in the impressions, and the designs are therefore quite hard to make out. If you look closely, though, you can see that each cover has at its centre a large panel illustration of a Roman goddess. The front features the goddess Justitia (justice), and the back shows Fortuna (luck).

The back cover of Les voyages du sieur de Champlain… (AMICUS 4700723) photographed under raking light to reveal the blind-tooled decorations. The centre panel stamp shows the Roman goddess Fortuna. The most visible detail in the stamp is a spoked wheel in the upper-left section of the panel; this is the famous “wheel of fortune,” a symbol that often appears in depictions of Fortuna.

Champlain’s writings are some of the most important 17th-century accounts of New France. His last book was published in 1632. The same year brought the initial instalment in another of the key sources on New France with the publication of the first of what are known as the Jesuit Relations. The Relations, which record the experiences of the Jesuit missionaries stationed in New France, were published on an approximately yearly basis until 1673. Think of them as the annual reports of the priests who were tasked with converting the Indigenous peoples of New France to Catholicism.

Between 1632 and 1673, 41 Jesuit Relations were published; LAC holds 35 of the 41 in its Rare Book Collection. Many of LAC’s copies are in contemporary bindings, but some have been rebound. The photograph above shows two different editions of the Relations published in 1650, the first edition on the right and the second on the left. The red goatskin leather binding on the first edition is by the British bookbinding firm Riviere & Son and dates from the 19th century. This binding, like the deerskin binding on the Champlain book, is the equivalent of a modern hardcover: the leather has been affixed to stiff boards, resulting in a heavy, thick cover. By contrast, the second edition is in a contemporary plain vellum binding that has no boards. This type of binding is referred to as limp vellum and is essentially the 17th-century version of a paperback. Just as paperbacks today are usually less expensive than hardcovers, limp bindings would have been a cheaper option for book buyers in the past. Whoever had this book bound may not have been able to afford to buy boards for it. If that is the case, then the person certainly could not have paid for intricate decorations such as the ones on the Champlain book, which would have added even more to the price of the binding.

All of this to say that there’s much more to an old book than the content inside! Books are sometimes overlooked as historical objects, perhaps because neither the way they look nor the way we use them—(open book,) read words, turn page, repeat—has changed much in the last 2,000 years. It may therefore not be obvious to us that an old book is an artifact, and that the ways books have been produced and consumed have evolved over time. Learning about the physical characteristics of books can tell us a lot about the history of a format that still plays a big role in our everyday lives.

Meaghan Scanlon has a Joint Master of Archival Studies and Library and Information Studies (University of British Columbia, 2010). Since January 2010, she has been the Special Collections Librarian at LAC. Her research interests include Canadian comic books and library history, with a focus on personal libraries.