On May 17, 1642, Paul de Chomedey de Maisonneuve, Jeanne Mance and a group of settlers founded Ville-Marie on land granted by the Compagnie des Cent-Associés, despite attempts by Governor Charles Huault de Montmagny to convince them to choose Île d’Orléans. Their settlement, known today as Pointe‑à‑Callière, had a specific purpose: Maisonneuve and his companions, members of the Société Notre-Dame de Montréal for the conversion of “savages” in New France, wanted to convert the Indigenous peoples to Catholicism and to live piously in the new colony.

As elsewhere in New France, it was difficult to settle Ville-Marie, because of climatic and geographic challenges, fear of Iroquois attack, and low numbers of settlers arriving in the colony. A decade after the arrival of the Société Notre-Dame de Montréal, the total population was only around 50. To compensate for the lack of settlers and maintain a French presence on the island, Maisonneuve returned to France in 1651 hoping to recruit people prepared to follow him to that distant island. He went back to Ville-Marie two years later with some 100 colonists. While those settlers substantially increased the population of the colony, it was only near the end of the 17th century, after the arrival of the Filles du roi and the Carignan-Salières Regiment, that the population of Ville-Marie grew significantly, as was the trend across New France. To mark the 375th anniversary of the founding of Montréal, Library and Archives Canada is sharing a small collection of original documents that tell the story of colonization attempts on the island of Montréal in the first decade after the arrival of the Société Notre-Dame de Montréal. One of the documents shows the names of individuals who played a key role in establishing the colony. The list includes Jean Saint-Pierre, the first clerk and notary in Ville-Marie; Gilbert Barbier, surveyor and churchwarden for Ville-Marie; and Lambert Closse, merchant, lord and interim governor of Ville-Marie. The three declared in writing that the Compagnie de Montréal was free of any obligations to them, in return for concessions granted and specific promises by Maisonneuve. 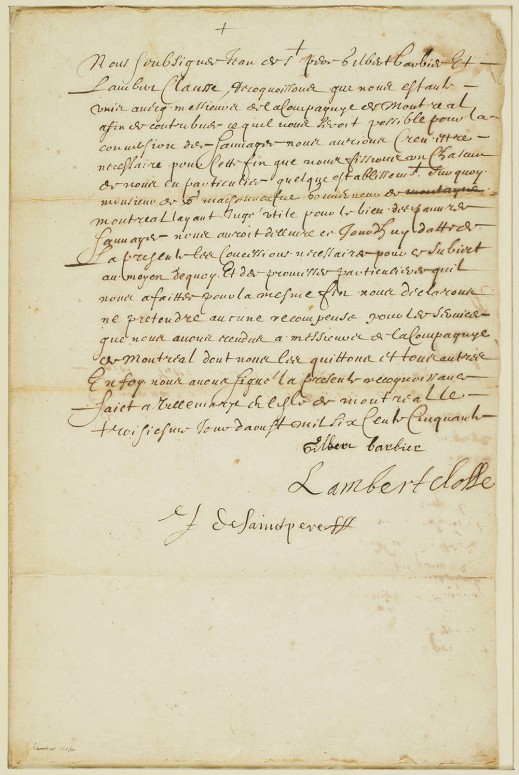 Acknowledgement of Jean de St-Père [Jean Saint-Pierre], Gilbert Barbier and Lambert Closse whereby in return for concessions granted and specific promises by Maisonneuve, they declared the Compagnie de Montréal free from all obligations in their regard, signed August 3, 1650 [translation] (MIKAN 98656)

The collection also includes signed contracts between Maisonneuve and the people who settled in Ville‑Marie. These documents show that Maisonneuve, to ensure that the new settlers stayed, offered them amounts in cash that would have to be reimbursed if they left before the period specified in the contract.

Two signed contracts, one between the Sieur de Maisonneuve and Jules Daubigeon, and the other between Fiacre Ducharme and Jean Valais. The contracts set out the amount of money received by the settlers in return for remaining on the island of Montréal for five years. The first contract is dated April 9, 1654; the second, December 21, 1654 (MIKAN 98656) 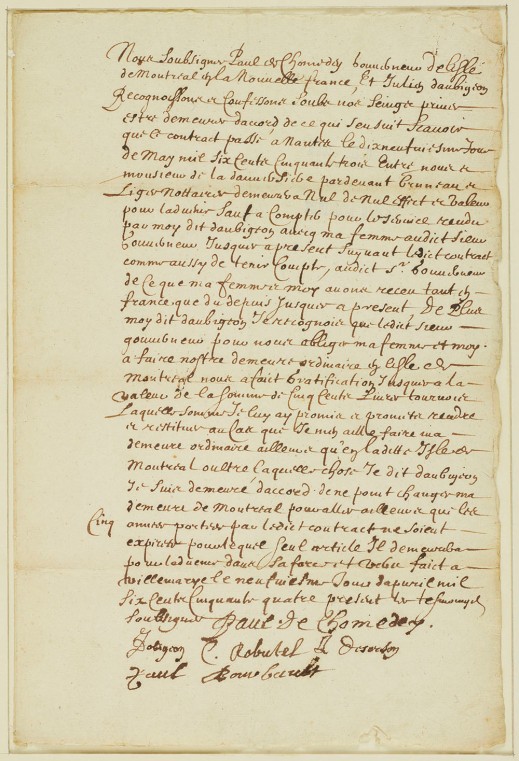 Contract between Maisonneuve and Nicolas Boddot, carpenter. In return for 600 pounds, Boddot had to stay on the island. The contract was signed on February 3, 1654 (MIKAN 98656)

Karine Bellerose Caldwell is an archivist for the pre-Confederation period in the Private Archives Branch at Library and Archives Canada.