Born in Borrowstounness, Scotland, in 1887, Strachan immigrated to Canada in 1908. He enlisted in The Fort Garry Horse regiment, based in Winnipeg, Manitoba, in 1915. He was a commissioned lieutenant and, on November 20, 1917, took command of a mounted squadron of The Fort Garry Horse at Masnières, France. When the squadron leader was killed, Lieutenant Strachan led the squad through the German line of machine gun posts and charged the German battery, killing seven of the gunners in hand-to-hand fighting. He then cut telephone communications three kilometers behind the German lines, rallied his surviving men, and fought his way back through to his own lines with all unwounded men and fifteen German prisoners. His citation in the London Gazette asserts that this operation “was only rendered possible by the outstanding gallantry and fearless leading of this officer” (London Gazette, no. 30433, December 18, 1917). 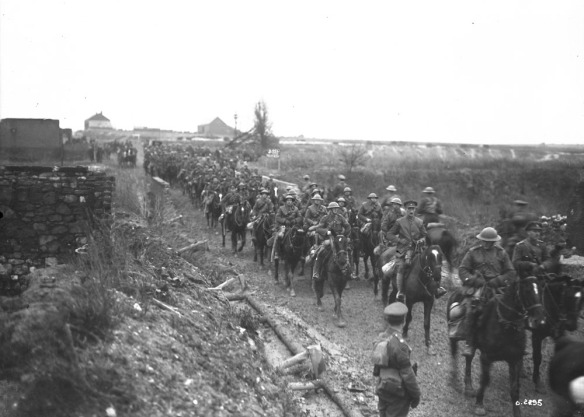 Lieutenant Strachan, VC, and a squadron of The Fort Garry Horse passing through a village on the Cambrai front, December 1917 (MIKAN 3405685)

Lieutenant-Colonel Strachan was promoted to captain and received his Victoria Cross from King George V on January 6, 1918. It became a tradition for the “Garrys” to hold a parade every year on the anniversary of Strachan’s Victoria Cross. Strachan survived the war and later commanded the 1st Battalion of the Edmonton Fusiliers during the Second World War. He died in Vancouver on May 1, 1982. Strachan was recently honoured with an historical plaque on the shores of Harcus Strachan Lake, 250 kilometers east of Thompson, Manitoba.

Library and Archives Canada has the fully digitized service file for Lieutenant-Colonel Harcus Strachan in the Personnel Records of the First World War database.