The tintype process was introduced in 1855 and quickly became one of the most popular ways for people to access and experience photography.

Tintypes are direct positive images, meaning they have no negatives. Created on a thin sheet of iron that is coated in a dark lacquer or enamel and layered with a collodion emulsion, tintypes are one of the most durable photographic processes. Prevalent in both museum and personal collections, they are compelling records of 19th-century life.

Much more affordable than a daguerreotype, tintypes became the medium of choice for people seeking to have their portrait made. Portrait studios offered tintypes for mere pennies. Their ease of processing created more portability, allowing mobile studios to flourish and expand their services to outdoor fairs or tourist destinations. Tintypes were used to record many outdoor scenes and events. The new medium offered the public an accessible option for capturing likenesses, and it became a catalyst in the acceptance of photography into popular culture. 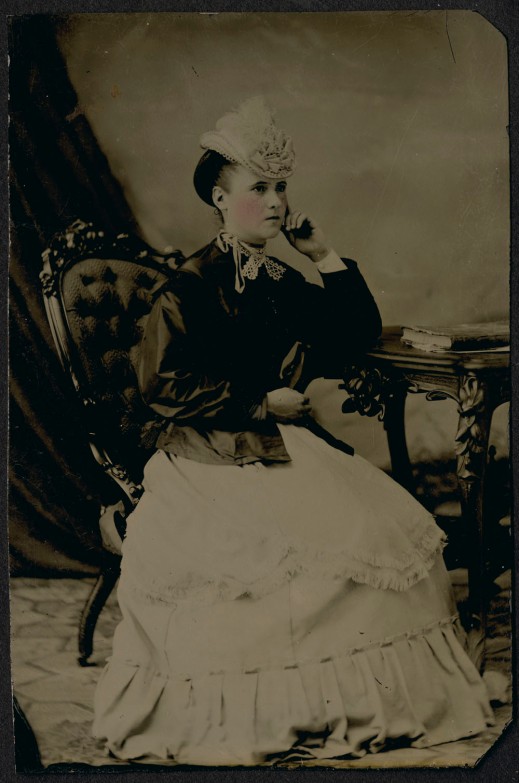 Because of their affordability and ease of production, tintypes were appealing to the middle and working classes. The move from the controlled environment of the studio to the outdoors led to a proliferation of never-before photographed scenes of 19th-century life, including people at work, street scenes, buildings and structures, and even battle scenes.

A new exhibition at the National Gallery of Canada features a selection of these intriguing objects. Drawn from the collection of Library and Archives Canada, these tintype portraits were created both inside and outside the studio and offer glimpses of life in 19th-century Canada.

The exhibition features several studio portraits, such as one of an unidentified woman posing in front of a Niagara Falls backdrop. Backdrops and studio props were widely used in 19th-century portrait studios, not only for aesthetic reasons but also as a method of self-expression.

Niagara Falls was one of the most desirable tourist destinations in the 19th century, so when used as a backdrop, it could have served as an expression of prestige or of personal interest in the attraction. If one could not personally travel to the site, a backdrop could be the next best thing. Backdrops can also provide clues as to the identity of the photographic studio.

A studio portrait of an unidentified woman standing next to a fence with a scene of Niagara Falls as the backdrop, mid 19th century (MIKAN 3210905)

People often posed with personal items that were of sentimental value or professional significance, as a way to convey who they were or express what was important to them. Sitters chose items that they felt characterized them, such as tools of their trade, musical instruments and photography equipment. Known as “occupational” portraits, these images are revealing and intimate records of past identities.

Two young men seated, one is holding a violin and the other is holding a cello, mid 19th century (MIKAN 3262290)

For more examples of these intriguing tintype portraits, visit Portraits on Metal: Tintypes from Library and Archives Canada on display within the Canadian Indigenous Galleries at the National Gallery of Canada in Ottawa from December 12, 2017 to July 6, 2018.

Jennifer Roger is a Curator in the Exhibition and Loans section at Library and Archives Canada.

2 thoughts on “Portraits on Metal: Tintypes from Library and Archives Canada – an exhibition at the National Gallery of Canada”