Yes, the Canadian Constitution was indeed patriated 40 years ago, in the sense that only Canada has the power to amend it now, not the United Kingdom. It was not signed, however, because it was a legislative act of the British Parliament. British and Canadian laws are proclaimed, not signed, by the head of state. As for the Canadian Charter of Rights and Freedoms, it is not even a document, so it cannot be officially signed.

On that date, Queen Elizabeth II signed the Proclamation of the Constitution Act, 1982 (Schedule B of the Canada Act 1982, proclaimed by the United Kingdom a few weeks earlier), which gives Canada the power to amend its own constitution and includes, among other things, the wording of the Canadian Charter of Rights and Freedoms.

Proclamation of the Constitution Act, 1982. Damaged slightly by rain during the signing ceremony, this version is informally known as the “raindrop” copy (e008125379)

So, then, what is the Charter?

We often see posters of the Canadian Charter of Rights and Freedoms, with the Canada Coat of Arms and the signature of the prime minister, but if this is not an official document, then what is it? 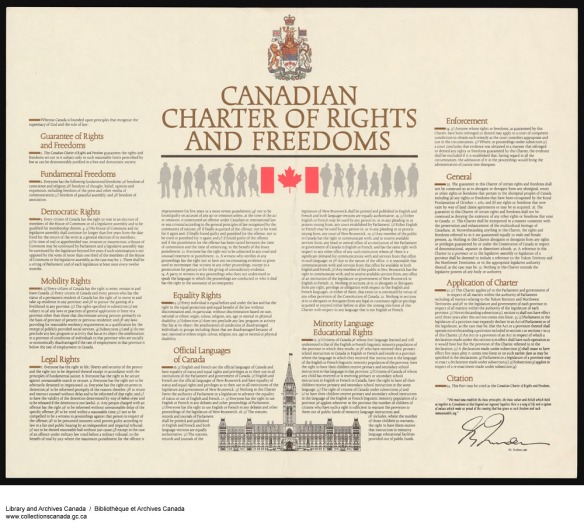 Contrary to popular belief, the Canadian Charter of Rights and Freedoms is not a document in and of itself. It is actually Part I of the Constitution Act, 1982 and was presented in poster format in 1985. This poster was never officially signed or proclaimed, since it is not a complete proclamation or legislative act. It is also missing the Great Seal of Canada, which must be affixed to all proclamations and certain official documents of Canada.

In 1985, after all of the provisions of Part I of the Constitution Act, 1982 came into force, the government wanted to promote its contents (that is, the Canadian Charter of Rights and Freedoms). To do so, it created posters that looked like an official document, with a stamped signature of the prime minister of the day, and distributed more than 250,000 copies to schools, libraries and public places across Canada. Today, the Charter poster can be downloaded (PDF format) or a printed version can be ordered (certificate or poster) from the Canadian Heritage website. Unfortunately, there is no official original version of this poster in the collections held at Library and Archives Canada (LAC).

The Canadian Charter of Rights and Freedoms is available in 29 languages and seems to have served as a model for the creation of several other constitutions and charters of rights throughout the world. It has also inspired hundreds of works in Canadian literature, many of which have been acquired by LAC through legal deposit: legal treatises, theses and dissertations, professional journal articles, popular works and even children’s literature.

According to British and Canadian rules, before legislation comes into force, it must go through a number of steps. First, the bill must be introduced in both chambers of Parliament, where it is discussed and debated before being passed by each chamber. The act must then be proclaimed by the head of state, that is, through royal assent (the Queen’s or the Governor General’s signature). Following the adoption of the Canada Act 1982, the Government of Canada itself drafted the text for the Proclamation of the Constitution Act, 1982, which the Queen agreed to sign in Ottawa on April 17, 1982. As with all previous Canadian proclamations, the other signatories were the Registrar General of Canada and the Attorney General of Canada. The Prime Minister of Canada also signed the 1982 proclamation, although this was not essential for the document to be considered official.

In fact, the signing ceremony of April 17, 1982, was only the public display of the real political event occurring at the time: Canada’s acquisition of the last political power that it needed to become a truly sovereign state. Until then, only the British Parliament had the power to amend Canada’s Constitution, under the British North America Act of 1867.

In enacting the Canada Act 1982, the United Kingdom agreed that no subsequent act of the Parliament of the United Kingdom would have effect in Canada. This act was also the only British law to be written in both English and French since the Middle Ages.

In conclusion, there is no single document that can be called the “Charter.” Multiple reproductions of the text that makes up the Canadian Charter of Rights and Freedoms are available free of charge. Even though LAC does not have the original poster of the Charter, it does preserve in its collections parchment facsimiles of all six of Canada’s constitutional documents: the Royal Proclamation (1763), the Quebec Act (1774), the Constitution Act (1791), the Act of Union (1840), the British North America Act (1867) and the Canada Act 1982. This collection of parchment copies of the documents was given to Canada by the United Kingdom after the signing of the Proclamation of the Constitution Act, 1982. Approximately 40 pages long, the Canada Act 1982 comes closest to being the original version of the Canadian Charter of Rights and Freedoms. In some ways, this constitutional text can be considered to be our national copy of the Charter.

Natasha Dubois is an archivist in the Government Archives Division at Library and Archives Canada.