At the turn of the 19th century, the theatre scene was languishing in Canada. Some plays were a huge success, such as Colas et Colinette, which was performed between 1790 and 1807 and was written by Joseph Quesnel, one of the first playwrights in the country. However, it was often too expensive to maintain theatre companies on a permanent basis. Moreover, the companies faced the disapproval of the Church, which did not like these types of performances.

Most often, it was theatre lovers—members of the social elite composed of French Canadians, military members and British merchants—who arranged venues and presented shows. American actors on tour also entertained audiences in major Canadian cities. When the Theatre Royal opened in Montreal in November 1825, the dramatic arts in Lower Canada were given a new boost. 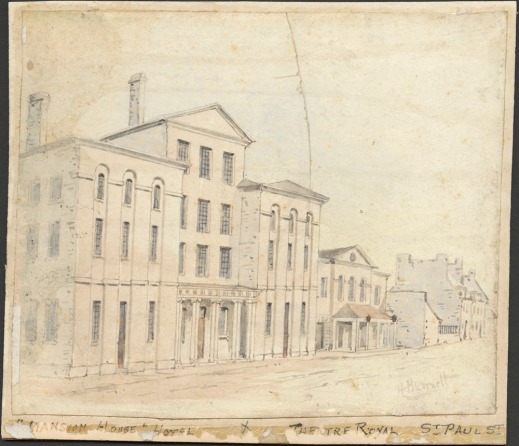 Support for the Society of Young Artists

Under these circumstances, shortly after the War of 1812, a company called the Society of Young Artists was formed. Driven by the revival of the theatre scene and the English Theatre’s move to the United States, it launched its first season in fall 1815, performing shows mostly in Montreal. The company promoted its season by printing a bilingual leaflet advertising its first play, Voltaire’s The Death of Caesar.

The leaflet’s main goal was to seek funding from the public through subscribers who committed to paying for tickets each month. For its part, the company promised to give four performances a month, under the best possible conditions, from November 15, 1815, to May 15, 1816. The ticket price was set at one dollar, for a monthly total of one louis (or one Halifax pound).

The Canadian newspapers at that time, such as the Spectateur Canadien dated November 20, 1815 (in French only), also promoted the Society’s shows. 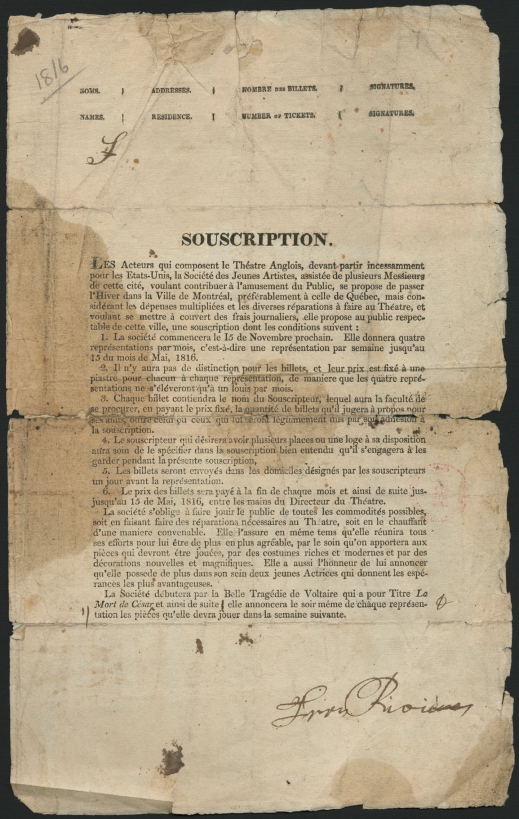 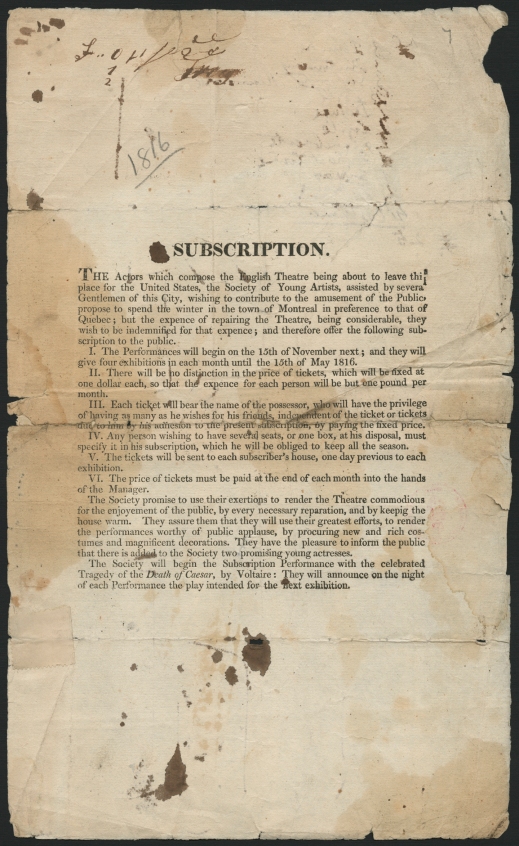 Interesting fact: a list of items was written on the back of the English leaflet. Valued at 25 pounds (Halifax rating), these items could have been used either on stage or to meet the Society’s needs. The list is very difficult to read, but the following items can be identified: millwork, cloth, a pulley, rope, green flannel, white iron and costumes—in short, the items needed for the company’s activities. 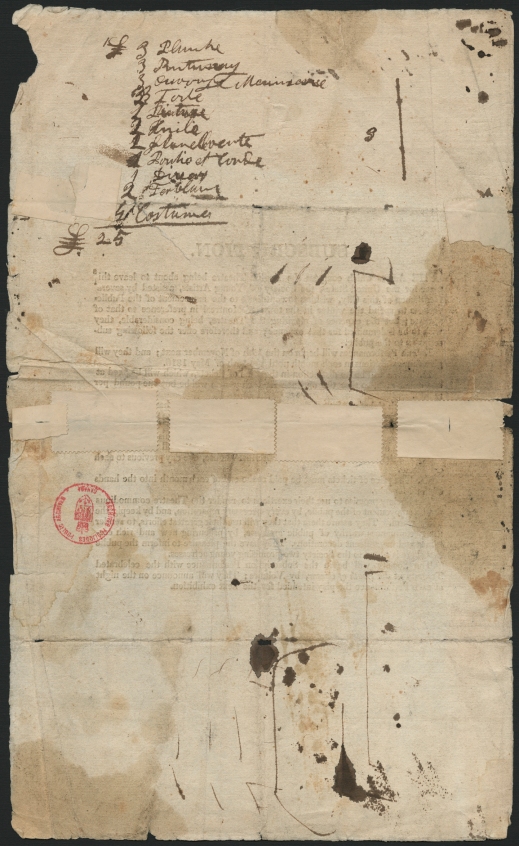 Unfortunately, we do not know all the plays performed by the Society of Young Artists. However, in his book L’activité théâtrale au Québec (1765-1825), Baudoin Burger gives us an idea of the repertoire on the French stage at that time. From 1814 to 1819, the Montreal and Quebec City audiences could enjoy the plays of Molière, Beaumarchais, Voltaire, Regnard, Bruyes and Dancourt. On the English stage, the artists performed Molière, James Kenney, and of course Shakespeare, who remained the most popular.

Very few archival records remain that document the beginnings of Canadian theatre under the English regime. The leaflets from the Society of Young Artists are therefore important and even unique records of our theatre heritage. They also show the love of art that pushed the Society to take the stage despite financial difficulties and varying levels of attendance. These people are, in a way, pioneers who believed in artistic development in Canada.