Chris Smith, Library and Archives Canada Collections Management Clerk, was recently assigned an interesting and challenging rehousing project. Chris found himself looking at a Laura Secord chocolate box filled with not sweets, but a tangled mess of Dictaphone belts: 27 in total.

Introduced by the Dictaphone Corporation in the 1940s, the Dictabelt was a voice recording system using a thin plastic belt. The Dictabelt Re-Recording Service describes how the recordings worked: audio could be impressed onto the belt utilizing a needle-type stylus to emboss or plough a groove into the soft plastic. They were predominately employed for business, medical and scientific recordings. After use, Dictabelts were usually stored flat in boxes or file folders. This caused creasing and damage to the recordings.

For the conspiracy theorists out there, certainly the most famous use of a Dictabelt was by the American House Select Committee on Assassinations, which investigated the assassination of President John F. Kennedy on November 22, 1963. Based on “acoustic evidence” supplied by a Dallas Police Department Dictabelt, the committee concluded that there were at least four shots fired in Dallas that fateful day, and that one of them came from the “grassy knoll.”

Following considerable research on Dictabelt preservation techniques and consultation with our audiovisual conservation experts, Chris began his rehousing process. He wrapped each belt around a piece of custom-cut acid-free board to reduce creasing. Chris then placed each wrapped belt in an envelope, built spacers, and rehoused all 27 belts. They now safely reside in an 18C and 40% relative humidity (RH) environment at our Preservation Centre. 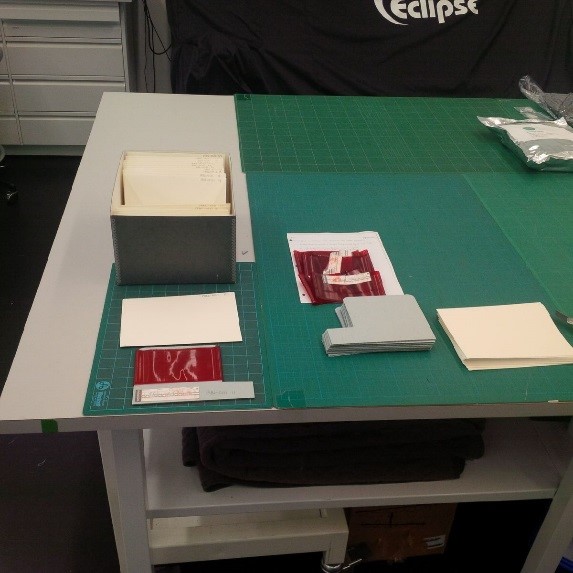 The Laura Secord box beside the new enclosure. Now the dictaphone belts will no longer be at risk.

The near-surgical precision in all this rehousing work is most impressive, and plays a vital role in our preservation activities. Well done, Chris!

2 thoughts on “Preventive Care and Maintenance: Laura Secord and the Grassy Knoll”