In 2011, construction of Library and Archives Canada’s (LAC) new Nitrate Film Preservation Facility (NFPF) was complete. This building was constructed following the National Fire Protection Association’s Standard for the Storage and Handling of Cellulose Nitrate Film (NFPA 40) and, as such, LAC had to follow certain rules. One of these rules limits the total amount of nitrate film that can be housed in each fire-resistant storage compartment to 305 metres (1,000 feet).

The NFPA 40 guidelines speak in terms of length of film and were clearly written for motion picture film, this format being easily measured in metres or feet. Dealing in length of material is harder, however, when planning for the storage of nearly 600,000 still photographic negatives of various formats stored across 1,600 containers. How much is 305 metres when you are talking about a container full of 4×5 negatives? Instead, LAC decided to deal in weight. It was estimated that 305 metres of motion picture film represents approximately 4.5 kilograms (10 pounds) of nitrate. This would be our new maximum amount per compartment.

For the most part, LAC’s nitrate negatives are housed in paper envelopes (sometimes multiple negatives per envelope) and stored in cardboard containers. To determine the total weight of nitrate film per container the first step was to find out the weight of an empty container. LAC staff weighed an empty sample of each of the various container types found in the collection. We also weighed an empty sample of each size of envelope. Next, a survey team worked through the entire collection weighing each full container and then estimating the number of envelopes of each size inside. Once this was known, it was simply a matter of subtracting the weight of the physical container and the paper envelopes from the total weight, which resulted in a pretty good estimate of how much nitrate was in each container. Any container that was found to have more than 4.5 kilograms of nitrate film was rehoused in two containers.

Once this work was complete, we had a list of containers with an estimated amount of nitrate in each. While this was valuable information, it wasn’t exactly a useful tool for moving day. LAC was about to relocate the entire nitrate collection to a new facility and only had a few days to get it done. The plan was to have two teams: one at Rockcliffe loading containers onto carts, and one at NFPF unloading the trucks, bringing the material into the vaults and placing the containers directly into the shelving compartments. The vaults are kept at a brisk 2°C so it was in everyone’s best interest to be as efficient as possible during the move. There was no time to cross-reference container barcodes with a list of weights while at the same time doing math to determine into which “cubby” each box should go so as not to exceed the 10-pound maximum.

The amount of nitrate in each container was visually represented using a labelling system. Labels were designed with large, easy-to-read numbers from 1 to 10, each representing a different weight class: under one pound, under two pounds, under three pounds, and so on, all the way up to the maximum of 10 pounds.

Example of a five-pound nitrate label 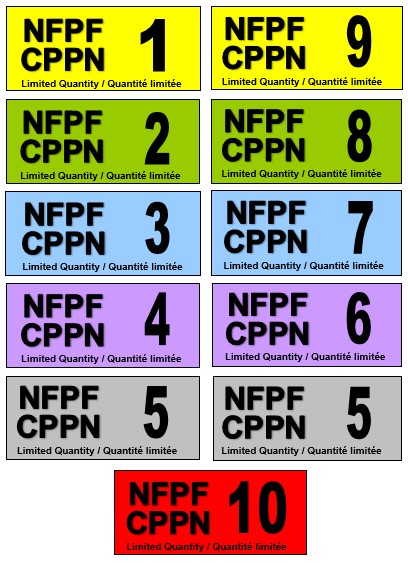 Colour-coded weight labels used for identifying the containers at NFPF.

In the end, the nitrate move went smoothly, with LAC moving 5,575 reels of film and over 1,600 containers of still negatives into NFPF over the course of two days. The nitrate film is now compartmentalized and housed at 2°C, which will help preserve it long into the future. 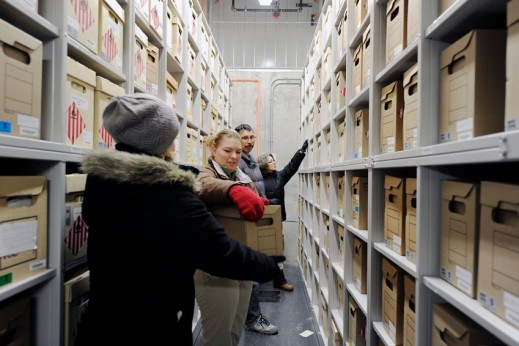 Lisa Hennessey is a Project Coordinator in the Preservation Branch at Library and Archives Canada.