Canada: Who Do We Think We Are?

A page for Joliette, Quebec, from the first Census of Canada, 1871 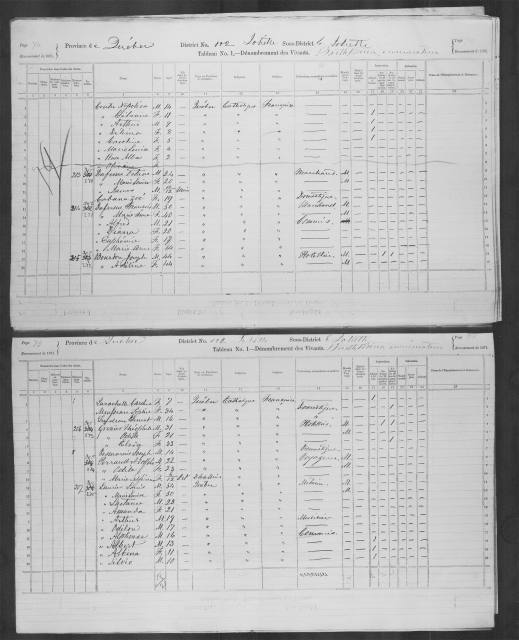 A page for Joliette, Quebec from the first Census of Canada, 1871.

Can you find the entry for Adolphe Perrault? Times change: Perrault made his living as a voyageur! As time passed, census data would feed social policy. Many programs by which Canadians define themselves are the result.

I am a lover of history and enthusiastic about unraveling family history puzzles. I have worked at Library and Archives Canada for over a decade, most of that time spent with the genealogy team answering questions, giving tours, recording podcasts, wading through family folklore and giving advice at the Genealogy and Family History desk.

When I first saw the entry in the 1871 Canadian census return for Adolphe Perreault (also spelled Perrault), I noted that his occupation was “voyageur” and that he was from Joliette, Quebec. I assumed that this was a cut-and-dry census entry for a fur trading family. I was even a little disappointed as it seemed so plain, so ordinary. I made a list of sources to check that may give hints on his voyageur career, such as the Hudson’s Bay Company Archives biographical sheets, and the BANQ notarial records (in French only) and then hurried back to my work as a genealogical consultant, putting it off for another day.

But then a colleague pointed out that the term “voyageur” can be ambiguous. At first I thought my colleague was overcomplicating a simple census entry, but then I started digging into the life of this voyageur Adolphe Perreault.

Adolphe Perreault was born in 1848 in Saint-Sulpice, Quebec, son of Alexis Perreault and Victoire Peltier. In the 1861 census, our voyageur was living with his family. His father Alexis was listed as a farmer. Adolphe married Odile Vézina in 1866 in Joliette. His marriage record lists him as a “cordonnier,” which translates to shoemaker. They had two children who died soon after birth in the late 1860s.

Next time we see Adolphe is in the 1870 U.S. federal census. He and Odile were living in Spencer, Massachusetts with the Vézina family. Adolphe is listed as working in a boot shop along with his father and brother-in-law, whose occupations are listed as “boot bottomer.” Their first surviving child, Zelphrin (Marie-Selférina) Perreault (Perrault), was born in 1870 in Massachusetts.

He then crosses the border to Canada and we find him back in Joliette with his young family a year later in the 1871 Canadian census, where he is listed as a “voyageur.”

He then returns to Spencer in 1872, where his next daughter Cordelia is born, and he is working in a boot factory. Adolphe is well documented over the next three decades in Spencer either as the father listed on his many children’s birth records or in the U.S. census returns, always listed as being in the shoe business. He died in 1906 in Spencer, his occupation listed as shoemaker.

In the end, we will never know if he tried his hand at being a fur-trader for a year. There are no hints that he was involved in the fur trade during his time in Quebec in any of the sources that I found. My guess is that he was a “commis-yoyageur,” which can be translated as a travelling salesman, perhaps selling the boots that he constructed with his in-laws in Spencer.

Either way, I can now say that I will never again be disappointed by a Canadian census return. A simple notation can lead to a fascinating search and bring you in a different direction than you originally thought.

Sara Chatfield is a Genealogy Consultant in the Public Services Branch of Library and Archives Canada.