Exchequer Court of Canada created in 1875

Since the Exchequer Court had fewer cases, they were heard by justices of the Supreme Court. These justices travelled across Canada for this purpose on a rotating basis from 1875 to 1887. In 1887, the Exchequer Court became a separate court; its first judge, the Honourable George Wheelock Burbidge, wrote the rules of procedure. 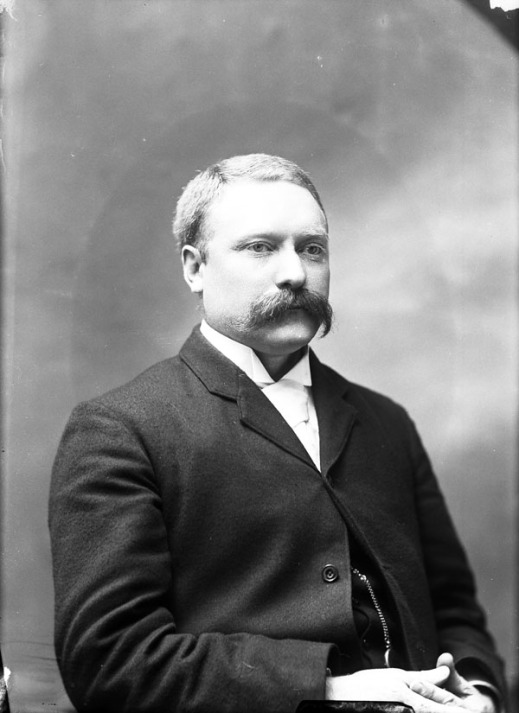 Cases heard before the Exchequer Court

Cases argued before the Exchequer Court included actions brought against the federal government, such as claims arising from accidents involving civilian or military government vehicles. But the government could also initiate lawsuits in the Court, such as expropriations or measures related to intellectual property infringement (patents, industrial drawings and trademarks), as well as disputes between the different levels of government. The Exchequer Court also heard appeals from the admiralty courts and appeals related to maritime law, taxes and citizenship.

Records in the Exchequer Court fonds

The vast majority of records in the Exchequer Court fonds at Library and Archives Canada are files related to cases. Other documents include special work of the Court, correspondence, minutes of hearings, various records and dockets.

The Registrar of the Court kept a large record book, know as the docket record, in which he recorded cases in chronological order. For each case, he entered the number, the names of the plaintiff and the defendant, and the names of their respective solicitors. Throughout the proceedings, he listed the documents filed with the Court, the date they were filed and the cost of registration. A docket record could contain many cases and be up to 10 centimetres thick. 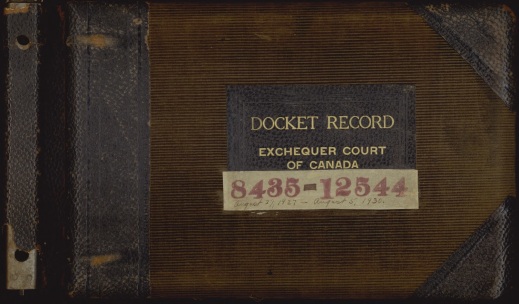 Files related to cases can include a multitude of documents, the first often being the petition of rights, or complainant statement. It sets out the alleged facts and the complainant’s claims. The defendant then responds to this statement, after which a date for the hearing is set. In the meantime, items are added to the file, the quantity depending on the scope of the proceedings. The ruling handed down by the judge is definitely one of the most important exhibits in the file.

The vast majority of documents are in English; those in French have been translated.

This case pitted the complainant—the Government of Canada, represented by the King—against the defendant, Isabel Gertrude Spencer, wife of Colonel Victor Spencer. The most interesting documents include the declaration of expropriation, the statement of defence, the judgment and the reasons for the judgment. 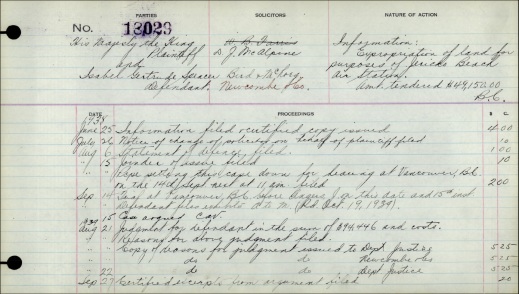 On June 25, 1938, the government (represented by the King) filed an “information.” This first document was to serve notice of expropriation of a property belonging to Isabel Gertrude Spencer, who was offered financial compensation. The reason for the expropriation was that the Royal Canadian Air Force wanted to build an officers’ mess on this land for the Jericho Beach Air Station in Vancouver. 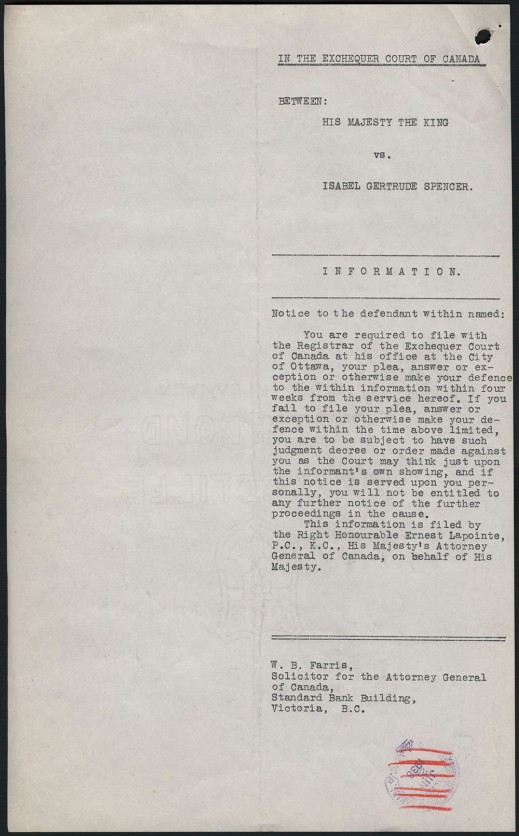 The Honourable Ernest Lapointe, Attorney General of Canada, on behalf of the King, files an information concerning expropriation of the property belonging to Isabel Gertrude Spencer (MIKAN 4936613)

The defendant has four weeks to file a statement of defence, which is what happened in this case. On August 6, 1938, Mrs. Spencer filed a document explaining why she disagreed with the amount offered. Attached are various exhibits in support of her plea before the Court, including a map of Jericho Beach showing the air station and Mrs. Spencer’s property in relation to it. 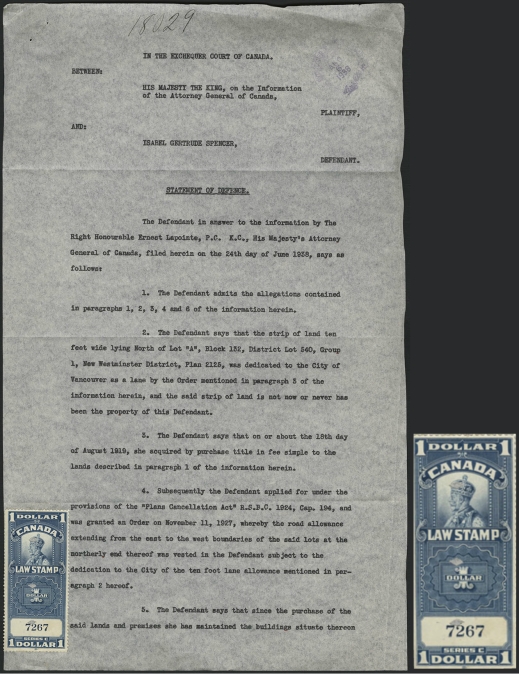 Mrs. Spencer’s statement of defence. Close-up of the stamp indicating that the defendant had paid the required amount of one dollar to file the document (MIKAN 4936614)

The defendant filed several exhibits, numbered A to M, in support of her position. Exhibit A is a map of the part of Vancouver near Jericho Beach, with her Trimble Street property circled. 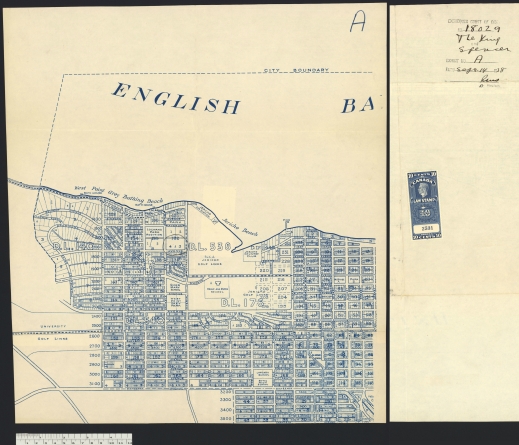 Map showing a section of Vancouver, near Jericho Beach. The lot on which Isabel Gertrude Spencer’s property is located is circled. Information about the case and a 10-cent stamp (the cost of filing the document with the Court) appear on the back of the map (MIKAN 4936615) 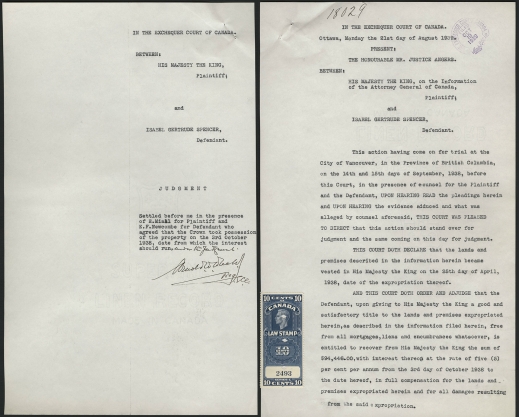 Judgment handed down in The King v. Isabel Gertrude Spencer. On the back, it is apparent that the document had been folded in half lengthwise. This was often done with these documents so that they could be inserted into a sleeve with other related exhibits (MIKAN 4936616)

Reasons for the judgment

In an 18-page brief presented at the same time as the judgment, the judge set out the reasons why he was awarding the defendant damages of $94,446. It is interesting to note that the judge lists the buildings and other installations on the property, to assess the value and compare with the government’s offer. 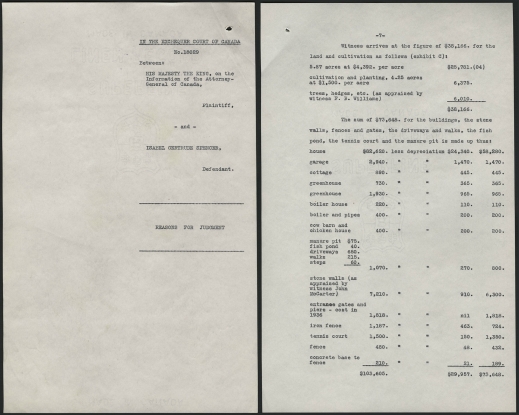 Title page of a document entitled Reasons for judgment, and page 7, showing a list of the installations evaluated by the judge according to evidence provided by experts, including an architect, a real estate agent and a gardener (MIKAN 4936631)

As can be seen, documents related to a court case can be used by future generations seeking information on a property, family, community or other related subjects.

Johanne Noël is an acting archivist in the Private Archives Branch at Library and Archives Canada.