So much has changed in 2020. Working with archives is about studying change over time, and reflecting on what that has meant to people’s lives. A case in point: the retail industry. What can we learn from studying the archives of a major department store?

Sears Canada was an icon of the retail industry through the second half of the 20th century, with stores in cities large and small, and a mail-order catalogue that spanned the country. The company was part of the Canadian urban landscape, and a major employer. The Sears department store often anchored local shopping malls, and the mall itself was a popular destination for purchasing household goods as well as for leisure shopping. The Sears Wish Book Christmas catalogue was familiar to Canadian families, rural and urban alike, and consumers were used to scoping, pricing and comparing big-ticket items like mattresses and appliances in its pages. Several brands of merchandise carried by Sears were themselves household names, including Craftsman tools, Kenmore appliances, Silvertone electronics and the Jessica clothing line.

Sears was a transnational success story, rooted in North American retail culture. U.S.-based Sears, Roebuck and Co. entered Canada in 1952, partnering with the Canada-based Robert Simpson Company (Simpsons) to create Simpsons-Sears Ltd. This new company operated a mail-order business worth $100 million in its first full year. It opened its first store in Stratford, Ontario, in 1953, and then expanded its retail stores to cities across the country. The new shopping experience offered by Simpsons-Sears challenged, most notably, the other Canadian retail behemoth: Eaton’s. Together these enterprises drew millions of Canadian shoppers to their stores and their catalogues, and they touched Canadians in their work and leisure pursuits.

In 2017, Sears Canada transferred its archives to Library and Archives Canada (LAC). This included 200 boxes of textual, photographic and audiovisual material, as well as another 200 boxes of published catalogues. These boxes contained more than 40,000 photographs, depicting Canadians shopping as well as Sears Canada employees working and participating in staff social events.

Since Sears Canada had maintained its own archives over a long period of time, it was relatively easy for LAC to arrange the material and begin to make it available to the public. The records came from a clean and well-organized facility, and for archivists, this facilitated the task of labelling files and arranging online descriptions. Recognizing the likelihood that the public would be interested in the photographs, LAC also moved quickly to digitize photographs. I am pleased to be able to share this collection with you here, along with a few suggestions for possible research avenues.

At first, the photographs included in this archival collection struck me as pure fun! For instance, I was amazed by the crowds at store-opening events.

For younger generations of Canadians, who are used to making most of their purchases online, these stores might be unfamiliar, and yet the shopping centres built around them have been part our communities since before many of us were born. We did not personally experience the transition from having your clothes made at home or by a self-employed seamstress or tailor, to purchasing them in a small community shop, to buying factory-made, accessibly priced fashion in the large department stores of the postwar era. I had read about the establishment of shopping malls only in history books like Donica Belisle’s Retail Nation: Department Stores and the Making of Modern Canada (2011). Yet these changes took place in a relatively short time.

Sometimes the photographs in the Sears Canada collection show how things have changed, and at other times, how they have remained the same. I was interested in the way that the photographs reflected a gendered workplace, where by and large the men were managers and the women worked the sales floor. On the other hand, the photographs depict auto service as a masculine workplace, as it still tends to be today. I had read about the high degree of “emotional labour” required for those working on the department store floor in Joan Sangster’s Transforming Labour: Women and Work in Postwar Canada (2010), but the photographs illustrate this concept graphically. 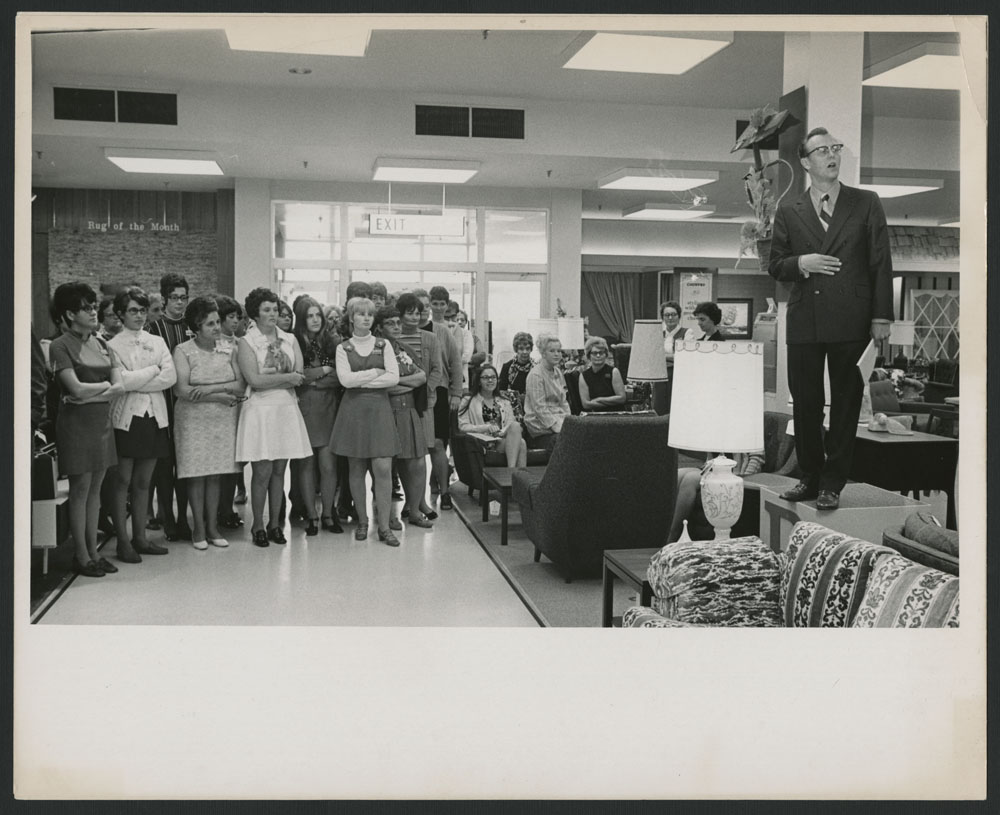 I remember slogans like “Your money’s worth and more!” but I did not know that Sears once offered mortgage and real estate services, or that the stores included pharmacies.

But I do remember when you could buy a bicycle at your local department store.

In the many hours that I spent carefully organizing and describing the photographs in this collection, I found myself considering some other themes evoked by the material: leisure shopping, accessible fashion, connections to community through local stores, and sales staff. You could finish an afternoon spent chasing a good deal with a sociable cup of coffee or tea in the store cafeteria!

The careful attention paid to window displays, lighting and signage, and celebrity appearances and endorsements, spoke volumes about the marketing techniques of the late 20th century.

As I continued to work through the archival photographs, I moved closer to my own era. One day, I remembered that my first social outing with close friends, with my freshly minted driver’s licence, was to the shopping mall. Then I came upon the original photograph used in the Sears catalogue for clothing that I remember having convinced my parents to purchase for me. And later I found photographs of places where I had shopped recently. I knew then that the public would also find this archival material relevant to their everyday lives.

As a long-standing transnational private enterprise, Sears Canada touched Canadians’ economic and social lives through employment, income, finance, leisure and consumer products. The company sponsored charitable organizations, cultural festivals, concerts and other performing arts, and in its appeal to shoppers, it diffused messages about leisure pursuits, consumer culture, fashion and suburban living in Canada. After 65 years in business, it officially closed all Sears Canada stores in 2018.

Researchers interested in the history of other department stores in Canada should look to the Archives of Ontario for the T. Eaton Company fonds, the Archives of Manitoba for the Hudson’s Bay Company Archives, and Bibliothèque et Archives national du Québec for archival records related to Dupuis Frères.

In common with my colleagues at these institutions, my goal is to emphasize the importance of verifiable primary sources, and to make archival resources publicly known and accessible, so that collectively, we can better understand our past. In the case of the Sears Canada fonds (R15993), it is my hope that the collection will enable the study of economic history and bring new perspectives to Canadians’ personal memories of the late 20th century. What memories do these photographs evoke for you? What do you notice that is different today? What research would you like to see or do using these archival materials?

Please let us know if we can help you get started on your research project.

Jennifer Anderson was an archivist in the Public Services Branch, and she previously worked in the Science, Environment and Economy section of the Archives Branch, at Library and Archives Canada.

3 thoughts on “Shopping at Sears: A window into the archives”