Imagine if the Canadian government invited a famous British writer to travel across Canada by train and stay at one of the country’s newest national parks—all at the expense of taxpayers! Think this scenario is impossible? Well, it happened a little over a century ago. In the spring of 1914, Sir Arthur Conan Doyle (of Sherlock Holmes fame) was invited to travel on the newly opened Grand Trunk Pacific Railway from Montreal to Jasper National Park. Conan Doyle accepted the invitation, and he and his wife, Jean Leckie, conducted the trip between May and July, 1914. The official photographer for the journey was none other than the celebrated William James Topley—a real public relations coup! Topley’s son-in-law, R.C.W. Lett, held a prominent position with the Grand Trunk Pacific Railway, and persuaded him to photograph Conan Doyle’s travels.

Conan Doyle’s trip to Jasper by train was, as it is today, a quintessential Canadian travel adventure. Writing about the experience later in Memories and Adventures, Conan Doyle stated:

“…We accepted an invitation from the Canadian Government to inspect the National Reserve at Jasper Park in the Northern Rockies. The Grand Trunk Railway (Canadian) made matters easy for us by generously undertaking to pass us over their system and to place a private car at our disposal. This proved to be a gloriously comfortable and compact little home consisting of a parlour, a dining-room and a bedroom. It belonged to Mr. Chamberlin, the president of the line, who allowed us the use of it. Full of anticipation we started off in May upon our long and pleasant journey.”

Thus the celebrated author set out with his wife by ship from England to New York City in late May 1914, and travelled by train to Montreal, arriving in the city on June 3, 1914.

Conan Doyle visited the sights of the city and went on a side trip to Trois-Rivières. The author then spoke to the Montreal branch of the Canadian Club on The Future of Canadian Literature. This same speech would be repeated in Winnipeg, Edmonton and Ottawa. Between June 5 and 8, Conan Doyle travelled from Montreal to Winnipeg by train and by boat. First, by train to Sarnia, Ontario, then on the S.S. Harmonic steamship to Fort William (near Thunder Bay). Of this part of the trip, he observed: “Then comes the enormous stretch of the Great Lakes, those wonderful inland seas, with great oceangoing steamers.”

Of Northwest Ontario, he noted: “The true division between the East and West of Canada is not the Great Lakes, which are so valuable as a waterway, but lies in the 500 miles of country between the Lakes and Winnipeg.” They stayed one night at the Minaki Lodge near Sioux Lookout, arriving in Winnipeg, Manitoba, late on June 8. 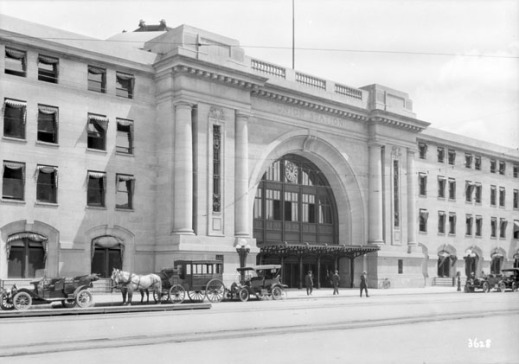 The entrance of the Grand Trunk Pacific and Canadian National Railway Station in Winnipeg, by William Topley, 1914 (MIKAN 3587592)

These images are superb at documenting the bustling prairie city. The stop in Winnipeg was not long, but Conan Doyle remarked: “I do not suppose the average Briton has the least conception of the amenities of Winnipeg. He would probably be surprised to hear that the Fort Garry Hotel there is nearly as modern and luxurious as any hotel in Northumberland.”

From Winnipeg to Edmonton

By June 9, Conan Doyle was in Edmonton, having crossed the Prairies. 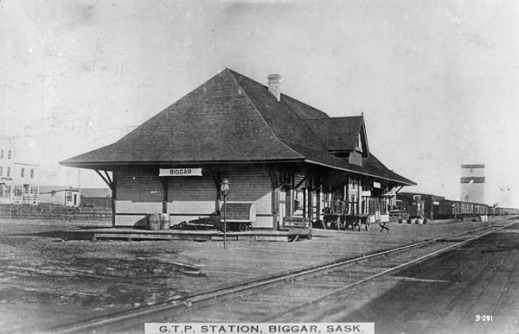 And he would have crossed over the high-level bridge entering Edmonton. 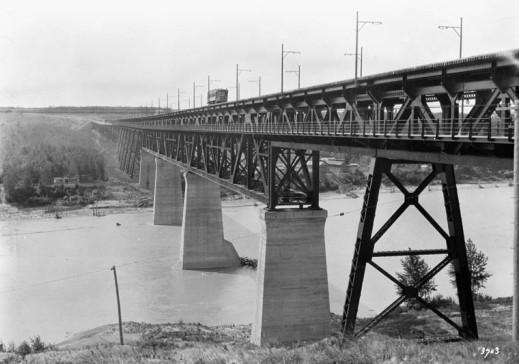 The couple stayed in Edmonton for two days. Here, Conan Doyle noticed the rough-hewn nature of the city, comparing it to Winnipeg: “There were no such luxuries in 1914 in Edmonton. The town was in a strangely half-formed condition, rude and raw, but with a great atmosphere of energy, bustle, and future greatness. With its railway connections and waterways it is bound to be a large city.”

The two prairie cities, Winnipeg and Edmonton, contrasted greatly with the breathtaking mountain scenery of Jasper National Park. In the next Blog, we will look at Conan Doyle’s extended stay at Jasper, a place that inspired him to write a poem of some importance…