The area of private records is a fascinating field of study: what do individuals choose to keep, what do they discard as their lives unfold, and what is left behind for posterity? Library and Archives Canada (LAC) holds a vast number of materials and mere fragments too; a photo here, a letter there. The Oscar Douglas Skelton fonds offers a glimpse into the private world of a significant public servant. The bulk of this collection was donated to LAC by Skelton’s daughter in 1992 and 1993. Since then, the papers have been described, processed, and the finding aid digitized for easier access.

Oscar Douglas Skelton (1878–1941) was a remarkably able and quietly influential Canadian. A popular activist and professor at Queen’s University from 1908 to 1925, he was closely engaged with the great public issues of his day. However, he is best remembered for his later work as under-secretary of state for External Affairs and chief foreign policy advisor to Prime Ministers W.L. Mackenzie King and R.B. Bennett. A man of integrity with a vision for an independent Canada, Skelton worked tirelessly behind the scenes to ensure that Canada’s voice was heard on the international stage. His papers illustrate the breadth of his professional life, but it is through his correspondence and diaries that researchers have gained deeper insight into his personal life.

Skelton’s personal papers revealed him to be an adventurous and independent thinker, a practical but passionately committed Canadian, a dedicated public servant, a loving husband, father, and surprisingly, a restless youth and lifelong romantic.

Seemingly on impulse, Skelton left Ontario for England the summer of 1901 to write the Indian Civil Service exam. He passed the competitive examination, skipped the medical, and refused a position with the British War Office. Instead, he seized an opportunity to work as a magazine editor in Philadelphia. Despite the distance and years away from Canada, Skelton’s courtship of his future wife, Isabel Murphy, was a success. A gifted writer, his love letters to her remain touching and sweet over a hundred years later. 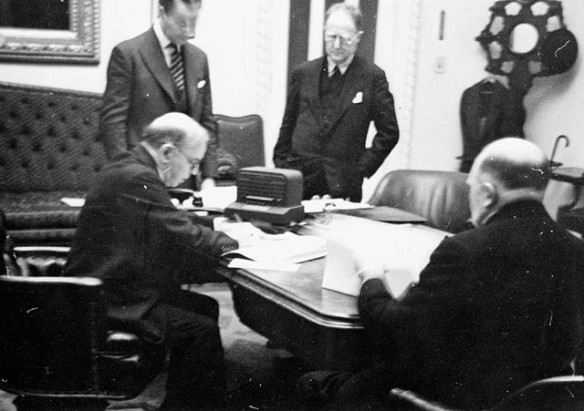 Right Honourable William Lyon Mackenzie King and Dr. Skelton at the signing of the British Commonwealth Air Training Plan agreement on December 16, 1939 in Ottawa. The final agreement was signed by Canada, the United Kingdom, Australia, and New Zealand on December 17, 1939 (MIKAN 3563847)

Through Skelton’s personal papers we see the evolution of an idealist—a quiet man who proved to be an adept and sometimes ruthless operator of the levers of power. Committed to the last, O.D. Skelton died suddenly in 1941 from a heart attack, his presence sorely missed by a government at war. His memory lives on in his papers, found at LAC.