The colony of New France was in a precarious situation when France’s King Louis XIV acceded to the throne in 1661. The population and safety of the colony were a priority for him. In order to increase the population, the first contingent of the Filles du roi (“King’s daughters”) was sent there in 1663. Two years later, in 1665, the Carignan-Salières Regiment disembarked in New France to ensure the safety of the colony and, more specifically, to deal with the Iroquois threat. 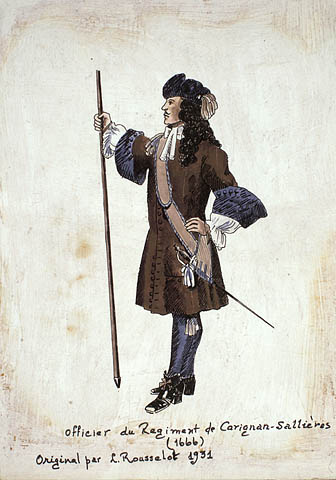 The Carignan-Salières Regiment was the only one to be deployed in full to Canada during the French Regime. To establish a sustainable presence in the colony, the colonial authorities provided a variety of incentives, such as distributing seigniories to officers in the regiment or marrying soldiers off to the Filles du roi to persuade them to settle in the colony at the end of their service. Of the 1,300 soldiers and officers from the regiment sent to New France, more than 400 settled permanently in the North American territory.

Library and Archives Canada (LAC) has a major collection of textual records on the Carignan-Salières Regiment. However, there are no holdings, as such, on the regiment. Researchers who are interested in the subject should start by consulting the thematic guide on available sources on the regiment at LAC. According to the guide, which was written by Michel Wyczynski in 1994, the documents on the regiment are catalogued in 15 series spread among nine archival holdings. The Archives de la Guerre fonds, copies of which LAC has on microfilm, contains the largest number of documents on the Carignan-Salières Regiment. These documents, like a good many documents on the French Regime in Canada, can be consulted on LAC’s website and that of the Héritage project. It should be noted that the thematic guide has not been updated since it was published in 1994. Since then, LAC may have acquired other documents on the regiment that are not included in the guide.

You may also consult the online database of documents on New France (New France Archives) through the Exploration and Settlement section on LAC’s website and The Carignan-Salières Regiment (1665-1669) through Discover the Collection and Military Heritage.

7 thoughts on “The Carignan-Salières Regiment”