Library and Archives Canada (LAC) has roughly 30 million photographs from various collections in its possession, a large number of which have Aboriginal content. During my time here as part of the Federal Student Work Experience Program (FSWEP) working on Project Naming, I have been able to explore the database and discover breath-taking photographs from different Aboriginal communities all over Canada.

Although the photographs themselves are quite wonderful to behold, the records often leave something to be desired. For many Aboriginal images, the titles contain antiquated and offensive language, or are simply vague. It is imperative that these records be updated with modern terminology and information gathered from members of the communities where these photographic records originated. The involvement of Aboriginal people in this process is crucial because these records depict their history, their culture, and their families; their voices are the ones that have been omitted and lost. As I myself belong to the First Nations, I have greatly enjoyed being able to share my culture and help restore the lost voices of photographs by helping to update the records.

One example is an image titled “Dirty Daisy and her baby.” The photograph depicts an Inuit woman and her child suffering from malnutrition. “Daisy” was not the name of this woman; it is more likely the name that was assigned to her by a government official. By calling this woman “Dirty Daisy”, the individual who wrote the caption effectively stripped her of both her dignity and her name. Hopefully, through Project Naming, the real name of this woman and her child will be uncovered. In the meantime, the record has been updated so that the title now reads “An Inuit woman (Daisy) feeding her baby while seated in a tent in Chesterfield Inlet (Igluligaarjuk), Nunavut.” 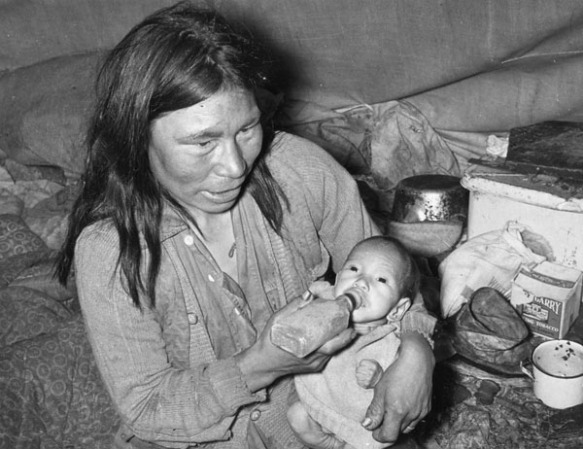 Since Project Naming began in 2002, more than 2,000 photographs have been identified. Additionally, thousands of records have had inaccurate and insensitive terminology removed from their titles and moved into a general notes field in order to provide historical context and perspective. Identifying names, places, events, and cultural objects facilitates the sharing of Aboriginal culture and stories with all who are interested in searching the archives. These include stories about Aboriginal politicians, for example Inuit Senator Charlie Watt who represents Quebec. I had the pleasure of working on DIAND Album 38, which contains several photographs of young Charlie Watt and his parents, Daisy and Johnny Watt. The photographs take place at a party in Kuujjuaq (formerly Fort Chimo), Quebec, and even though the photographs are black and white, the vibrancy of that Inuit community shines through. 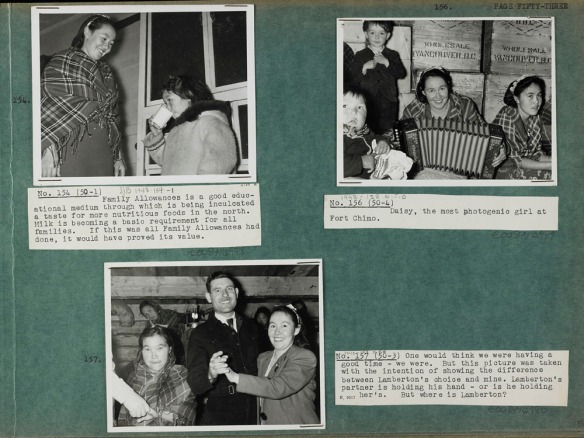 Album page fifty-three with photographs of an Inuit woman and girl (Daisy Watt, possibly with Harriat Ruston), a group of Inuit women and children—Daisy Watt is playing the accordion, Christina Gordon is on the right, and Charlie Watt (Daisy’s son) is standing on the left—and S.J. Bailey and H. Lamberton dancing with two Inuit women—Daisy Watt is on the right with S.J. Bailey, the woman behind her is Susie, and Hannah (Susie’s sister) is on the left holding H. Lamberton’s hand—in Kuujjuaq (formerly Fort Chimo), Quebec (MIKAN 4326945) 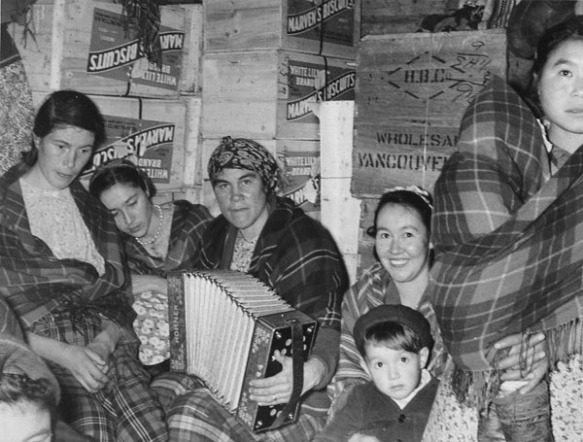 A group of women and children at a party in Kuujjuaq (formerly Fort Chimo), Quebec, the woman playing the accordion is Lizzie Suppa and to her immediate left are Daisy Watt and Charlie Watt (Daisy’s son) (MIKAN 3855585) 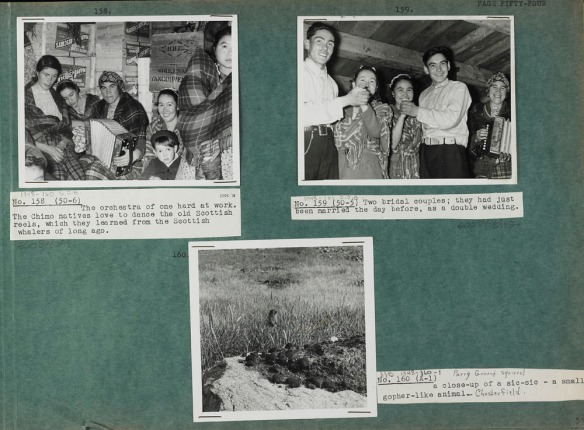 Album page fifty-four with photographs of a group of women and children [Lizzie Suppa is playing the accordion, seated to her left are Daisy Watt and Charlie Watt], two Inuit couples dancing [Johnny and Daisy Watt are on the left, on the far right is Lizzie (with her accordion again)], and a Siksik (an Arctic ground squirrel) (MIKAN 4326946)

All of these photographs are essential to the telling of Canadian history. They demonstrate the narrative of the relationship between Aboriginal people and the Canadian government, and most significantly, they tell the stories of the individuals in the photographs and share their culture. For decades, First Nations, the Metis Nation, and Inuit voices have been lost in these records. Project Naming is vital because it provides Aboriginal people a forum through which they can reclaim their stories and identities. I am glad that I have been able to contribute my voice, as a First Nations woman, to these records. There are so many stories to be told, and I am sure that as LAC continues to move forward in partnership with Aboriginal peoples, we will be able to hear them.

Harriett Mathews was an FSWEP student who worked in the Exhibition and Online Content Division at Library and Archives Canada during the summer of 2016.