Canada: Who Do We Think We Are?

The beaver was seen as a good stand-in for the average Canadian: industrious, tenacious… and with great building skills. This is one reason why it appears on the nation’s first postage stamp.

I acquire and process philatelic archives from private, or non-governmental, sources. Although LAC holds the extremely important Post Office Department fonds containing the records of Canada Post, the study of philately is one that happens entirely in the private sphere. So to complement the official records, LAC also collects the records of stamp designers, engravers and artists along with those of printing companies, Canada’s philatelic study societies and prominent philatelic researchers and exhibitors.

I recently represented LAC at the 2016 British North America Philatelic Society Exhibition in Fredericton, New Brunswick where I sought to foster knowledge of LAC’s holdings and how to use them, while also making a pitch that members of the society could have archival records of interest to LAC’s growing collection.

I did not entirely expect to find myself at LAC. After completing my undergraduate studies in 2006, I received a full scholarship for a year to continue my studies in Chinese language at Beijing Normal University in preparation for a planned MA program in Chinese history. However, illness and a change of direction brought me into the workforce. I worked in technical support in London, Ontario and later supervised a technical support team in Montréal for several years before returning to graduate school.

This exemplar of Canada’s first postage stamp, the Three-Pence Beaver, is one of 250,000 printed and first issued on April 23, 1851 under the auspices of the Honourable James Morris, Postmaster General, for use across the new Province of Canada (which included modern day Ontario and Quebec). The colonial provincial legislature, having decided to use printed postage stamps in 1849 and having taken control of the postal administration in 1851, commissioned the talented engineer and inventor Sandford Fleming for the design of the first stamp. Fleming met with the Postmaster General and Sheriff Rutter (or Rutten) at Ellah’s Hotel on King Street in Toronto on February 24, 1851 to discuss the details of the design.

What Fleming produced was quite revolutionary—the first postage stamp to depict an animal as a symbol of the country rather than a monarch or head of state. The beaver image simultaneously represented the industriousness and tenacity of the nascent Canadian nation in building up their cities, towns and communities while also harkening back to a time when beaver pelts were a common currency in economic activity.

At the time, postage stamps were a relatively new invention; Great Britain issued the world’s first pre-paid postage stamp in May 1840 with the “Penny Black.” Prior to postage stamps, one would need to make a cash payment to a postmaster, who would then indicate receipt of pre-payment on the cover. As the new postage stamps did not yet have perforations, some postmasters resented the additional burden of cutting stamps from a sheet for sale to customers, only to immediately cancel them to indicate usage and prevent reuse. The older practice thus continued alongside the use of postage stamps for some time, until new legislation in 1875 mandated that stamps be used exclusively for proof of payment.

The beaver design was reprinted on several later issues of postage stamps. The beaver remains a popular motif; it appears on our 5-cent coin and was selected as Canada’s national animal in 1975.

What some people may not know about this item is that at the time of the stamp’s issue, there was a minor controversy over it having been printed in New York, rather than in Toronto.

Research has shown that Hugh Scobie, printer of the Toronto newspaper The British Colonist, likely received a verbal order in early or mid-March to print the stamps from a lithographed die engraved by a James or John Ellis. The Postmaster General, James Morris, received concerns that this printing process was too prone to counterfeiting and thus made a second verbal order with the New York printing firm Rawdon, Wright, Hatch & Edson to print the postage stamps from an engraved steel plate. While Scobie’s newspaper had previously published laudatory editorials about the Postmaster General and the new postage laws, he turned vitriolic once he learned that the postage stamps would be printed in New York. While Scobie’s attacks on Morris were regarding the supporting of tradesmen and industry in the Province of Canada and in backing the superior product that could be printed in Toronto, it is clear that he was more upset about having lost the unwritten contract with the Post Office.

The first regular issue of postage stamps printed in Canada would not come until April 1, 1868, when the so-called “Large Queen” stamps were printed in Montréal by the British American Bank Note Company. New domestic mail postage rates were set at 3 cents for letters across the newly confederated Dominion of Canada.

Included in the design and production proofs held by LAC is the only known essay for a rejected 1 shilling (12 pence) postage stamp of the same design and two uncut consecutive panes from the same plate proof.

For many years Fleming kept a log of his activities, albeit without much commentary. In his diary entry for February 24, 1851, Fleming writes “Breakfasted at Ellah’s Hotel with Mr. Rutter (Rutten) and Honble. Jas Morris Post Master General [, d] esigning postage stamps for him” [sic]. Below this entry, he later affixed a single stamp cut from the plate essay printed by Scobie in Toronto. With the issued stamps later printed in New York, this plate essay is the only one of its kind known to exist.

The story of this diary page does not end there. The bulk of Fleming’s personal papers and records were donated to the Dominion Archives (now LAC) after his death. However, Sir Sandford Fleming’s son, Sandford Fleming Jr., removed the page from his father’s diary and gave it to H. Borden Clarke, a rare book and stamp dealer, in 1934 in exchange for unspecified goods and services. Clarke, for his part, announced that the acquisition would prevent this philatelic treasure from being locked up in “a cold museum vault.” Clarke gave the page a valuation of $10,000 (or $178,750 adjusted for inflation in 2016), and said that he would entertain offers for its purchase by the dominion government or other interested parties. He promoted it by selling a limited run of 100 prints reproducing the diary page with the Photostat technology used at the time. One of these prints is included in the H. Borden Clarke fonds also held at LAC. 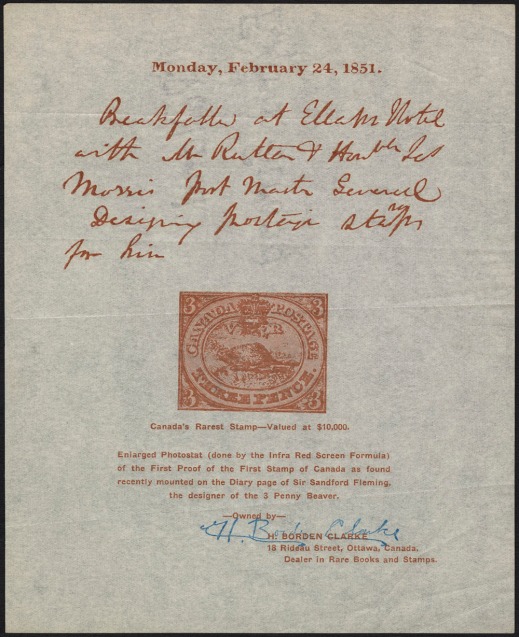 A photostat copy of a page from Sir Sandford Fleming’s diary noting his meeting with the Postmaster General and Sheriff Rutter (Rutten) about the three-pence stamp. (e011180500)

There is reason to believe that Clarke was in negotiations to sell the page to the government, but the start of the Second World War stymied the process and it was never concluded. Instead, Clarke sold the page to the collector Bruce Robson of Ottawa for a mere $200 in March 1941.

The pages in Fleming’s diary have entries for six days on each side meaning that each sheet contains a total of twelve days. When Sandford Fleming Jr. removed the diary page, the entries for the surrounding days were lost. While there were no entries for February 25th or 26th (presumably Fleming was busy designing the “Beaver”), it is unknown what happened to the other part of the page, containing entries for February 18th to the 23rd, nor if there were any entries from February 27th to March 1st on the verso.

It also remains a mystery exactly when Fleming finished the design of the Beaver postage stamp, but it could not have been too late into March as the Postmaster General was busy making arrangements (and rearrangements) for its engraving and printing. Fleming’s diary makes no further direct mention of the postage stamp, although his entry for March 11th states that he sent a proof of some sort to Sheriff Rutter (Rutten). 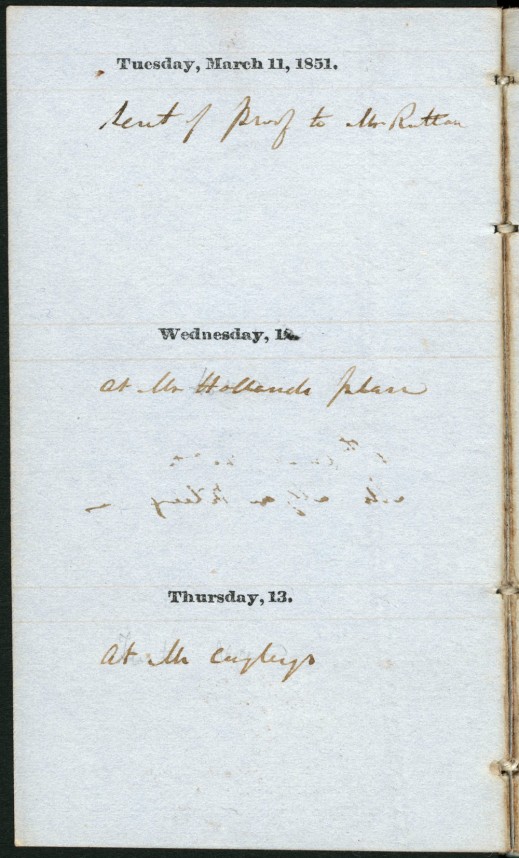 The diary page remained in the hands of Bruce Robson and his family until it was put up for auction in 1996. At a second auction in 2004, the page sold for resounding $110,000 US, proving that Clarke may have been quite prescient in his original valuation of the page in 1934.

James Bone is an archivist working on philatelic archives in the Visual, Sound and Landscape section of Library and Archives Canada’s Private Archives branch. He holds a Master of Library and Information Sciences from McGill University (2013) and a Bachelor of Arts in History from King’s University College at Western University (2006). His past experiences include a practicum at the McGill University Archives and archival assistant work at Western University’s Archives and Research Collection Centre. He was part of the innovative team at Library and Archives Canada that adapted the BANCTEC scanners for the digitization of the Canadian Expeditionary Force’s personnel files.