Join us every month during 2017 as experts, from LAC
, across Canada and even farther afield, provide additional insights on items from the exhibition. Each “guest curator” discusses one item, then adds another to the exhibition—virtually.

Tell us about yourself.

I love historical fiction. The more I’ve read, the more I’ve realized how much work goes into researching the setting and background of good books. It’s the same for exhibitions—a lot of research for small captions that pack in tons of information. Through various internships, I got to work on exhibits and books, where I researched or worked with historical objects that would be viewed by the public. Now having finished school, I’m lucky to continue doing this type of work. My work for LAC allows me to research a wide variety of subjects and to learn how large public exhibitions are put together.

Tell us about an  item that you would like to add to the exhibition.

Fashion plates were most popular during the 19th century, when printing advances allowed an explosion of magazines available to the public. The most well-known magazines include La Belle Assemblée; or Bell’s Court and fashionable magazine and Costumes Parisien from London and Paris. However, there were also Canadian magazines such as Glass of Fashion (linked with a company in New York) and Ladies’ Pictorial Weekly from Toronto. These different magazines show that while much of fashion and culture was still coming from Europe and the United States, Canadian publishers were trying to create their own editions that would cater specifically to Canadian readers. By including songs, poetry, theatre news, gossip about the nobility, and fashion plates, these magazines became the forerunners of today’s cultural and society magazines. LAC’s collection of fashion prints and magazines is a great source for reconstructing the Canadian popular culture of the time. The songs, poetry and gossip articles show us what Canadians were reading, to whom they were listening, and in whom they were interested.

The plates themselves are miniature works of art, created by designers and artists to showcase current fashions for an eager public (usually the middle and upper classes). Many of these prints were detached from their sources, and are now sold separately to collectors. However, some prints were printed completely separate from magazines, to be used more specifically for advertising. Prints like these are valuable not only for their artistic merit, but also for their documentary value. They are a great source for reconstructing what Canadians were wearing at the time, and they can be used to build exhibits, shows, costumes for living history museums, and all sorts of other historical projects. 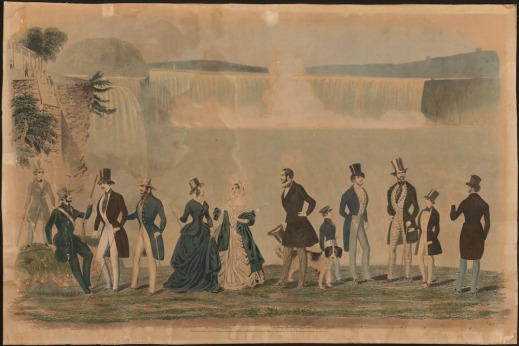 Vasanthi Pendakur has a Master of Arts in Public History from the University of Western Ontario. She completed an undergraduate internship with LAC in 2012, assisting with a project to digitize all personnel files of those killed in action during the Second World War. She has returned to LAC as an exhibitions assistant; her main duties are to provide exhibition support, such as copy-editing and content research, and to write and coordinate blogs. She is also a hostess at the Canadian Museum of History, and she provides expert advice on exhibit development and collections management for the Canadian National Institute for the Blind.