Susanna Moodie called Canada’s woods “the prison house.” Flower painting may have been her form of therapy. It allowed her to impose order and refinement on one small piece of nature.

Studying the visual culture of Canada has been a pursuit of mine since first being hired to research primary archival and printed sources for an exhibition on historical art produced in Canada. I was hooked—the material satisfied both my love of fine art as well as cultural context. I feel very fortunate to have been able to make it my career.

Watercolours, such as Bunch of Wildflowers, were for Moodie not just a pastime to create gifts for family and friends, but also a commodity that could be used for cash income or trade. With a price tag of $3 to $5, she could pay her servant. William Notman, the famed Canadian photographer, is known to have accepted—at his own suggestion—an autographed watercolour as payment for his photographs. (Moodie obliged with A Group of Crimson, White, Yellow, and Pink Roses.)

The bunch of wildflowers—including periwinkle, dandelion, and clematis—may well have been picked by Moodie herself, but her arranging them into a watercolour was part of her domestic economy. 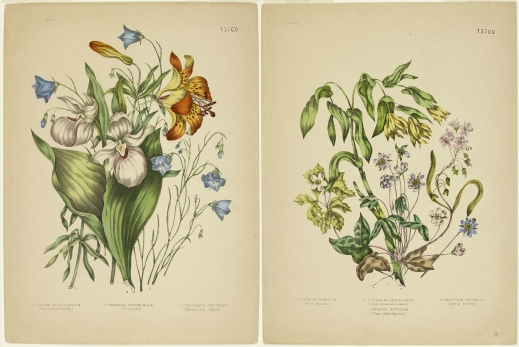 Agnes FitzGibbon, daughter of Susanna Moodie, collaborated with her aunt Catharine Parr Traill (Susanna’s sister) on Canadian Wild Flowers, published in 1868 and praised for its scientific accuracy. Susanna Moodie’s Bunch of Wildflowers bespeaks her joy and passion in picking and aesthetically arranging flowers, and immortalizes her artistry in watercolour. In contrast, FitzGibbon’s fine illustrations are informative, her delineation precise to ensure legibility of specimen.

FitzGibbon’s project was from the start a business venture, each of the 500 copies containing 10 lithographed plates, each hand coloured (with help!), and accompanied by Parr Traill’s descriptions both poetic and naturalist. Executed over 1867 and 1868, Canadian Wild Flowers in subject and timing surely assumed a mantle of national relevance. 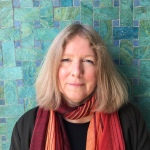 Arlene Gehmacher, PhD, is Curator of Canadian Paintings, Prints & Drawings at the Royal Ontario Museum (ROM) in Toronto, Ontario, where she develops collections-based research and exhibits. She also teaches; her course “Collecting Canada” deals with the acquisition, interpretation and display of the ROM’s picture collection and is offered through the Art History Department of the University of Toronto. Her publications cover the 19th to 21st centuries, and include articles on Ozias Leduc (1996), Cornelius Krieghoff (2003), Naoko Matsubara (2003, 2016), Paul Kane (2010, 2014), Arthur Heming (2013), and William Blair Bruce (1999, 2014).