The 1912 summer Olympics held in Stockholm, Sweden, from May 5 to July 27 was a venue for many firsts. This fifth Olympiad, comprised of 2,408 athletes from 28 nations, was the first to showcase women’s swimming and diving events as well as the men’s pentathlon. It was the first Olympics to use electronic timing and the first occasion a team from Asia (Japan) competed at the games. For Canada, the 1912 summer Olympics meant another first—the first Canadian Black athlete to compete in the Olympic Games.

John Armstrong Howard was born in Winnipeg, Manitoba, on October 6, 1888. Howard was a qualified mechanic and played baseball for Winnipeg’s Crescent Creamery Baseball Club; at 6 foot 3 inches tall, he was also an exceptional sprinter. He handily qualified for the 1912 Olympics and was looked upon not only in sporting circles but also in the Canadian media as the nation’s best hope for bringing home a gold medal.

Walter Knox was coach of the 1912 Canadian Olympic Track and Field Team. During training, Knox and Howard had several disputes and confrontations. Knox described Howard as outspoken and disobedient and, at a time when discrimination against Black athletes was common, recommended he be fired from the team for “insubordination.” It was only through the intervention of the Amateur Athletic Union of Canada that Howard remained on the team.

While en route to Sweden, Howard faced discriminatory and prejudicial treatment, an affront endured by people of colour in that time. Before setting sail from Montreal, he was barred from the hotel where the other athletes were staying, and while on board, he had to eat his meals in a different dining area away from his teammates.

Once in Stockholm, the cumulative stress of his interactions with Knox manifested itself in the form of severe stomach complaints. At the games, Howard’s health issues seriously hindered his efforts and he was defeated in the semi-finals of the 100- and 200-metre sprint. However, once back home, Howard redeemed himself at the 1913 Canadian Outdoor Championships by winning every race he entered.

After the outbreak of the First World War, Howard went overseas in 1917 as part of the Canadian Expeditionary Force. He worked in various English army hospitals carrying stretchers. His military records show that he suffered from chronic lung ailments. While overseas, Howard met Edith Lipscomb. Edith returned to Winnipeg with Howard in 1920 where they were married. They attempted to set up house in Ste. Rose du Lac, but experienced much hostility and prejudice as an interracial couple. Howard’s granddaughter, Valerie Jerome, tells of townspeople pelting the couple’s car with stones to drive them away. Eventually they settled near the Crane River Indian Reserve on the northwest shore of Lake Manitoba. The couple had three daughters, but the marriage did not last. Howard later died from pneumonia at the age of 48.

John Armstrong Howard at the Inter-Allied Games in Pershing Stadium, Paris, July 1919 (a006650) 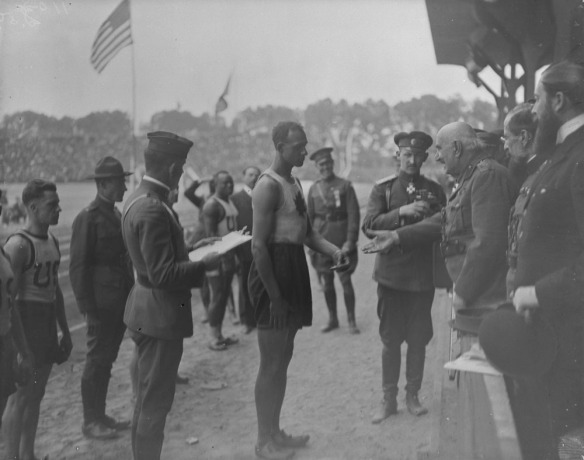 John Armstrong Howard receiving his bronze medal for the 100-metre event from the King of Montenegro, at the Inter-Allied Games in Pershing Stadium, Paris, July 1919 (a006626)