One of my favorite things about working with rare books is that these books have a potential to connect me with history in ways that extend beyond their written content. One such example of this potential is the 1786 Book of Leviticus published by Lion Soesmans. What makes the copy now located in the Jacob M. Lowy collection special is that it contains the signature of one of its former owners, Rebecca Gratz (1781–1869). 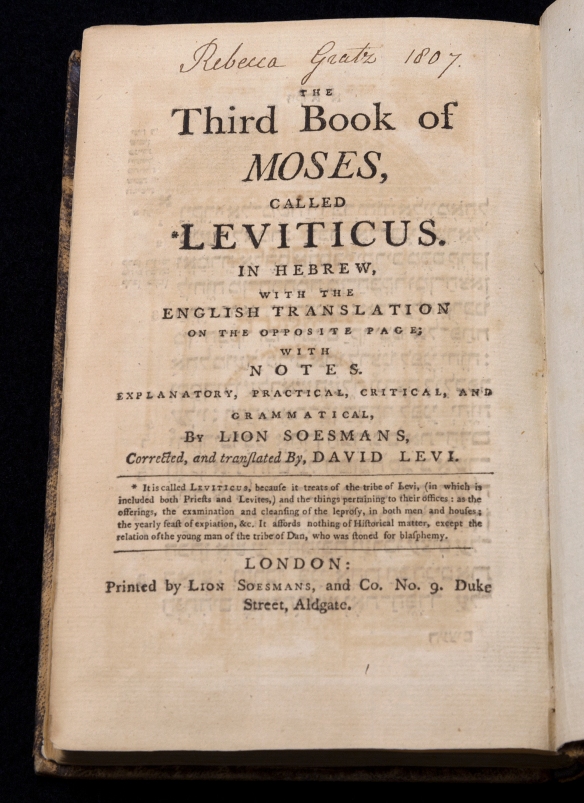 While you may not have heard of Gratz, you quite likely have heard of a far more famous fictional Rebecca: Rebecca of York, the heroine of Walter Scott’s 1819 novel Ivanhoe. A work of historical fiction, this novel helped spur the popular images of Robin Hood, Friar Tuck, King Richard and Prince John. This Rebecca is a dark-haired beauty, a healer, and the central female character of the novel. Desired by men, kidnapped, tried for witchcraft, and ultimately fleeing England, Rebecca of York is an empowering fictional Jewish woman.

While the inspiration for Scott’s Rebecca is debated among scholars, many point to Gratz as the origin. As legend has it, Scott heard about Gratz while visiting his friend, writer Washington Irving, at his home in Abbotsford, Scotland, during 1817. Irving was reported to have had great admiration for Gratz, and he imparted these sentiments to Scott.

From a young age, Rebecca would become a leader in philanthropy and community work. At 20, she helped found the Female Association for the Relief of Women and Children in Reduced Circumstances, a non-sectarian charity aiming to help poor families. One of her next major initiatives to help the poor came in 1815 when she helped establish the Philadelphia Orphan Asylum.

Gratz was also heavily involved with Jewish charitable organizations. In 1819, she helped organize the Female Hebrew Benevolent Society, which is presently the oldest continuously operating Jewish charitable organization in the United States. The goal of this organization was to provide assistance to Jewish woman in need. This organization functioned independently of any synagogue, but also sought to counter similar work by Christian organizations seeking to convert Jewish woman in need. Her quest to help the poor would continue in 1855, when she helped establish the Jewish Foster Home and Orphan Asylum. This organization would go on to become a model for foster care in the United States. She was also involved with United Hebrew Beneficent Fuel Society and the Hebrew Ladies’ Sewing Society.

Arguably, one of Gratz’s biggest accomplishments in the Jewish community was in the area of education. In 1838, she founded the Hebrew Sunday School Society with the sponsorship of the Female Hebrew Benevolent Society. Inspired by the Christian Sunday schools, her school offered a free Jewish education to any Jewish child in Philadelphia. This school also provided one of the first opportunities for Jewish education for female students in the United States. Gratz’s model for Jewish education is still alive and well today in Jewish supplementary schools across Canada and the United States.

Perhaps most impressive is that Gratz accomplished all this charitable work while raising her sister Rachel’s orphaned children.

Learning about all her accomplishments, it is not hard to understand why Rebecca Gratz has been compared to Mother Teresa.

Whether or not Gratz truly inspired Scott, these two inspirational women—one real and one fictional— share a deep commitment to community service. In Scott’s novel Ivanhoe, the fictional Rebecca expresses this sentiment before leaving England, referring to herself in the third person: “. . . since the time of Abraham downward, have been woman who have devoted their thoughts to Heaven, and their actions to works of kindness to men, tending the sick, feeding the hungry, and relieving the distressed. Among these will Rebecca be numbered.”

Being able to handle this historic Bible, I am humbled to think of its former owner and her truly remarkable legacy.

Michael Kent is curator of the Jacob M. Lowy collection at Library and Archives Canada.