In March 1951, inmates at the British Columbia Penitentiary in New Westminster, B.C. published the first edition of the penitentiary’s bimonthly magazine, Transition. Prison administrators promoted penal publications such as Transition during the 1950s and 1960s as part of a broader initiative to remodel the correctional system around a model of rehabilitation rather than punishment. With subscriptions offered for external readers at the rate of $1 annually, the editorial staff of Transition worked not only to keep inmates abreast of daily life at the penitentiary but also to establish a “feeling of understanding and faith” between prisoners and broader society.

Staffed by an editorial team of inmates and published at B.C. Penitentiary’s own print shop, Transition offered the penitentiary’s residents a chance to voice their views on a wide variety of subjects. Issues of the magazine featured editorials, articles of fiction and critical commentary, as well as coverage of prison sports and entertainment. Recurring columns included one on advice by a Dr. Larrup Loogan, called “What’s Your Beef?” and a section on prison affairs aimed primarily at the inmates, titled “The Inmate Speaks.” Holiday issues of Transition offered a particularly touching perspective, featuring seasonal greetings from inmates to friends and family, as well as reflections on the experience of the holiday season from inside the penitentiary. As one writer in the November–December 1959 issue noted poignantly, “high walls have a way of casting thick shadows across the laughter of a Christmas meant to be bright.” 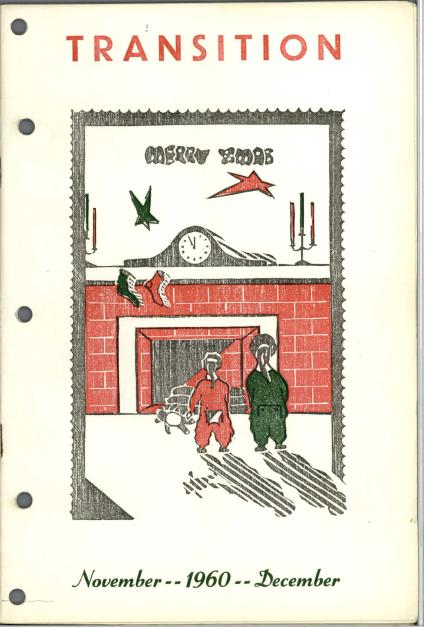 Publications like Transition often faced challenges in balancing the goal of providing an authentic outlet for inmates to express their views within the constraints of administrative censorship. However, given the realities of censorship, one of the most striking features of Transition is the frequency and depth of the critical analyses of criminal justice issues. Columnists discussed policy debates and offered personal perspectives on the effectiveness of Canadian strategies for prisoner rehabilitation. In Transition’s January–February 1959 issue, one columnist contended that Canadian efforts at rehabilitation had failed to live up to their goals, arguing that Canadian penitentiaries did “little but instill in the majority of inmates either a conscious or an unconscious desire to get even with society.” However, not all articles were equally disparaging. For example, a feature in the May–June 1961 issue detailed the positive contributions of B.C. Penitentiary’s blacksmith shop: “The inmate tradesmen in the BCP blacksmith shop are performing a public service that could be performed in no other way and by no one else. This is a fact in which these men can justifiably take pride.”

Drug use and its treatment by the criminal justice system represented another frequent topic of debate among Transition’s columnists. The January–February 1959 issue features two contrasting opinions on the criminalization of drugs. One columnist argued that “the addict is a person who is mentally and morally incompetent” who could not be parted from his criminal tendencies by the legalization of drugs. The other contended that the social problems created by drug use lie in its criminalization, and not in the addicts themselves. As a result, he advocated the legalization of drugs as a government cost-saving measure and a remedy to the culture of criminality surrounding drugs.

Inmate columnists did not restrict their commentary to criminal justice issues. For example, the opening editorial of the 1961 Christmas edition sketches a pointed critique of voter apathy in Canadian elections. The editorial analysis presented by the columnists is especially effective when they highlight the eagerness with which their otherwise disenfranchised fellow inmates participate in Inmates Council elections. As they note, “Possibly they could set an example for the citizens and send forth emissaries to use a little rehabilitation on them.”

The vibrant discussion of criminal justice issues found in the pages of Transition reflects a broader debate taking place among policymakers during this period over how to best create an environment for the successful rehabilitation of inmates. This contentious atmosphere placed increasing strain on relationships of prison administrators and the penal press. By the mid-1960s, administrative, financial, and distribution support for penal publications decreased and censorship escalated, marking the decline of a Canadian penal press that catered to an external audience on any significant scale. As a result, issues of Transition published at the height of the magazine’s circulation during the 1950s and 1960s represent an invaluable resource, providing a unique look into the intellectual lives of inmates and an original perspective on criminal justice issues.