British Columbia joined Canada 150 years ago, and in the years that followed, federal infrastructure expanded throughout the province. This infrastructure is well documented throughout Library and Archives Canada’s collections. This eight part blog series highlights some of those buildings, services and programs, as well as their impact on B.C.’s many distinct regions.

While astronomical research predates Confederation, federal investments in the field began in earnest in the early 20th century. After the construction of an observatory in Ottawa in 1905, astronomer John Stanley Plaskett began advocating for a state-of-the-art reflecting telescope. This led to the construction of the Dominion Astrophysical Observatory in Saanich near Victoria, British Columbia. The observatory in B.C. was once the world’s largest telescope facility.

The Dominion Astrophysical Observatory is located in the traditional territories of the Xwsepsum (Esquimalt), Songhees, Tsartlip, Pauquachin, Tsawout, Tseycum and Malahat Nations. Their ancestors were signatories of the Douglas treaties of the 1850s, also known as the Fort Victoria treaties. Differences between the treaty text and the oral histories of the First Nations signatories have led to continuing debate as to whether the treaties were land sales or peace agreements.

Land clearing and construction at the site began in 1914 and continued despite the challenges posed by the First World War.

Work on the observatory sparked interest internationally as well as locally. The site became a tourist destination as residents visited to observe the progress and attend the official opening in 1918. 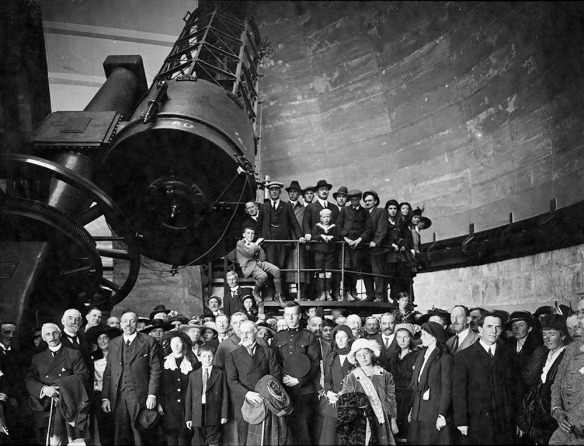 Opening ceremony of the Dominion Astrophysical Observatory; view of the telescope (a149323-v8)

With the world’s largest operational telescope at their disposal, Plaskett and his fellow astronomers wasted no time in beginning an ambitious observation program. Specializing in binary stars and later focusing their sights on the Milky Way, the team made extensive contributions in the study of astronomy. Successive teams have continued this vital work, and today the Dominion Astrophysical Observatory is one of two observatories managed by the Herzberg Astronomy and Astrophysics Research Centre.

The observatory engaged with the public and continues to do so. In the 1920s and 1930s, observatory staff contributed to ongoing local newspaper columns and radio broadcasts on astronomical topics of the day. Today, the charitable organization Friends of the Dominion Astrophysical Observatory promotes public outreach activities at the observatory and the Centre of the Universe visitors centre.

Caitlin Webster is a senior archivist in the Reference Services Division at the Vancouver office of Library and Archives Canada.