In the first week of April 1915, members of the 1st Canadian Division, including many of the earliest volunteers of the war, were moved north from Bethune, France to the active section of the line near Ypres, Belgium. A medieval Belgian city, Ypres was the scene of one of the war’s earliest and bloodiest battles in 1914 and had assumed great strategic importance. When the front stabilized in November 1914, the Allied lines bulged out around the city into the German line, forming a salient, surrounded on three sides by higher ground.

On April 22, 1915, in an effort to eliminate the salient, Germany became the first nation to use chemical weapons, releasing over 160 tons of chlorine gas across the Allied front. Members of the 1st Canadian Division, who had been in their trenches barely a week, found themselves desperately trying to defend a 6.5-kilometre gap in the Allied lines as the French division to their left crumbled in the face of Germany’s new weapon. The chlorine gas clung to the ground and filled the trenches, forcing the troops to climb out and into the path of heavy machine-gun and artillery fire. 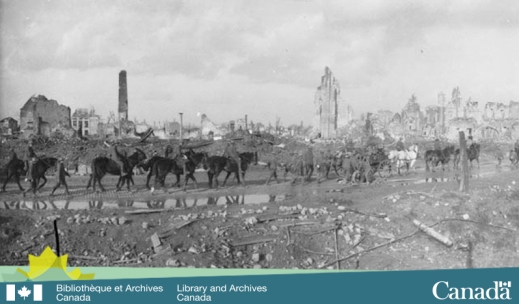 A scene of the destroyed city of Ypres, showing the Cathedral, Cloth Hall, and Canadian troops passing through, November 1917 (MIKAN 3194491)

The Cathedral and Cloth Hall in Ypres, before the Great War (MIKAN 3329077)

German troops moved forward but, having planned only a limited offensive and lacking adequate protection against their own chemical weapons, they were unable to exploit the break in the line. Throughout the night and the subsequent days, Canadian and British troops struggled to maintain the line. Canadians mounted a counterattack at Kitchener’s Wood (derived from Bois-de-Cuisinères) and endured the terrible fighting at St. Julian: their Canadian-made rifles jamming in the mud, and soldiers violently sick and gasping for air. Somehow, they managed to hold the line until reinforcements arrived on April 28. The losses were tremendous: 6,035 Canadians (or one in three soldiers) became casualties by the time the 1st Canadian Division was relieved. This toll among an army whose members had almost all been civilians just months prior.

At Second Ypres, the Canadians were initiated into the horrors of modern warfare, and from this moment on they would continue to develop into a highly respected formation in the Allied forces.