View of the Library and Archives Canada booth at the Truth and Reconciliation national event in Edmonton, Alberta, by Sarah Hurford, 2014

When the first residential school opened in the 1870s, the idea had mainstream support. Today, Canadians find the policy abhorrent. The Truth and Reconciliation Commission has had a major role in educating the public.

I have been interested in records relating to Indigenous heritage since my first summer at LAC as a summer student in 1998. This is when I saw firsthand how much of a difference finding historical documents made to people.

This photograph was taken in the middle of a huge arena with thousands of people in it, and many booths: government departments, church sharing circles, vendors, and many, many visitors. It really was shared space, and for that reason alone, the arena itself was a site of reconciliation. It was a very unique experience, and the air was charged with emotion and the smell of burning sage. People stopped at the LAC booth to share their stories with us, ask us questions, and look at the photographs we had on display. To me, the event was particularly special since it was the last national event planned, so it was the last time I thought I would be in such an environment.

The other related item I would like to add to the exhibition is this photograph, which shows a group of boys who lived too far away from the residential school at Aklavik to return home during the summers. At the national event in Edmonton, I met the grandson of one of these boys, who immediately found his grandfather in the photograph. Every time I see the photo, I remember meeting his grandson, and that experience really underscored for me that it was important that we were there at the national events to hear these stories, and that we understand that historical documents in our collections have an effect on the present day.

Inuit children who lived too far away and had to stay at the Anglican Mission School during the summer by photographer M. Meikle (MIKAN 3193915). 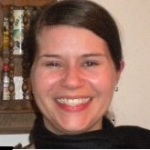 Sarah Hurford has been an archivist at LAC since 2009, and specializes in records and search tools relating to Indigenous heritage. She has held positions in Reference Services and in Private Archives, and has provided reference support for two document disclosure research projects conducted for the Truth and Reconciliation Commission. She is currently in the Government Archives Branch in the Indigenous and Northern Affairs Canada portfolio.