I had the great pleasure recently of being one of the librarians responsible for selecting an item for Premiere, the new acquisitions exhibition at Library and Archives Canada (LAC). This opportunity allowed me to look back and reflect upon the acquisitions work I have done for LAC, specifically in the Jacob M. Lowy Collection of rare Judaica, which I curate. Working with this collection, I am immensely privileged to be able to tell the story of Canada’s Jewish community through its published heritage. Much of my selection work focuses on books printed in Canada. However, sometimes I am able to look farther back in time and tell the story of how the Jewish community came to Canada.

One example of looking farther back is my selection for the Premiere exhibition of the Metsia’at ha-Arets ha-Hadashah, published circa 1806. It is the first book in Hebrew to tell the story of the discovery of the Americas. The book, whose title translates as “the discovery of the New World,” is an item that I was especially pleased to be able to add to the Jacob M. Lowy Collection. 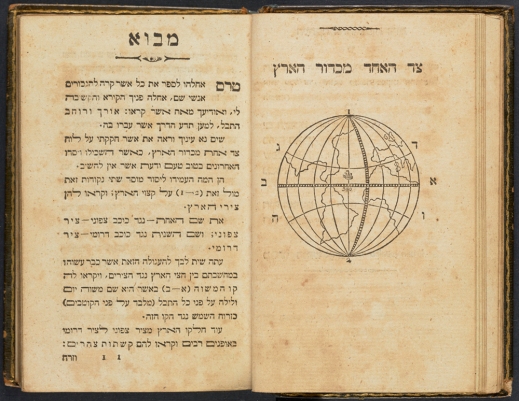 The Metsia’at ha-Arets ha-Hadashah opened to the introductory section, which includes a map of the Americas (AMICUS 44961986)

The original German work Die Entdeckung von Amerika, by Joachim Heinrich Campe, was a book for children. The Hebrew translator, Moses Frankfurt Mendelsohn, adapted it by changing the style from a dialogue between a father and his children to a straightforward historical narrative. He was motivated to produce this book because of the widespread interest in Columbus among European Jews at the time. There was serious speculation that the Italian explorer was in fact Jewish.

Originally produced because of interest in Columbus, the book was also created during an important period for what would later become the Jewish community in Canada. The 1800s brought many changes to the lives of European Jews. Emancipation, pogroms and opportunities for emigration to North America would profoundly reshape the community. These changes helped give birth to a Canadian Jewish community.

When I open this book, I do not just see a book about Columbus, I see a work that is probably the first exposure that many Jews in Europe would have had to information about the Americas. When I examine the map included in the book, I see what was probably the first representation for many Jews of the lands that would become Canada. In short, I consider this book to be an important step in raising awareness about the Americas and a tool in allowing this community to imagine a new life in Canada.

Canada is a country made up of diverse immigrant communities. In acquiring the Metsia’at ha-Arets ha-Hadashah, I am honoured to help tell the story of one of these communities, and of an early step in that community’s journey of becoming Canadian and building the Canada we know today.

Michael Kent is Curator of the Jacob M. Lowy Collection at Library and Archives Canada.