Born in Winnipeg, Manitoba, on December 11, 1889, Mitchell was a civil engineer before enlisting as a private with the Canadian Railway Construction Corps on January 21, 1915. In 1916, he became a lieutenant and joined the 1st Tunneling Company, Canadian Engineers. Mitchell was promoted to captain in 1917 after receiving the Military Cross for his gallantry. In 1918, Mitchell was posted to the 4th Battalion, Canadian Engineers. During his time with the 4th Battalion, he performed a heroic feat that helped to ensure Allied success at the Canal de l’Escaut, northeast of Cambrai, France.

After the end of the Battle of Canal du Nord on October 1, 1918, Allied soldiers were intent on entering and clearing the town of Cambrai. Previous offensives had opened some roads into the town, and now a further manoeuvre was needed to bring in the 3rd Canadian Infantry Division. German resistance was strong to the northeast of Cambrai, and the Canadians aimed to capture and move beyond the town. The following days would see a Canadian offensive, with Canadian forces liberating French villages against stubborn German resistance.

On the night of October 8 to 9, 1918, Mitchell led a party of sappers (soldiers responsible for building and repairing roads and bridges, and clearing mines) on a reconnaissance mission near Cambrai. Their task was to go beyond the security of the Canadian front lines to inspect bridges over which the Canadian 5th Infantry Brigade planned to advance. The goal was to prevent these bridges from being demolished. After coming across one bridge that had been destroyed, Mitchell and his team moved on to the next bridge, which stretched across the Canal de l’Escaut.

Under heavy barrage and in total darkness, Mitchell ran across the bridge, unaware of the enemy’s positions or strength. He discovered that the Germans had prepared it for demolition. With the assistance of a non-commissioned officer, he cut the detonation wires and removed the explosive charge. When the Germans realized that their explosives were being removed, they moved toward the bridge to set off the detonations. Seeing that his sentry was wounded, Mitchell rushed forward to assist. He killed three German soldiers and took 12 prisoners. Saving the bridge helped to assure the later success of the 5th Infantry Brigade’s operations.

As recounted in the London Gazette:

Then under heavy fire he continued his task of cutting wires and removing charges, which he well knew might at any moment have been fired by the enemy. It was entirely due to his valour and decisive action that this important bridge across the canal was saved from destruction. 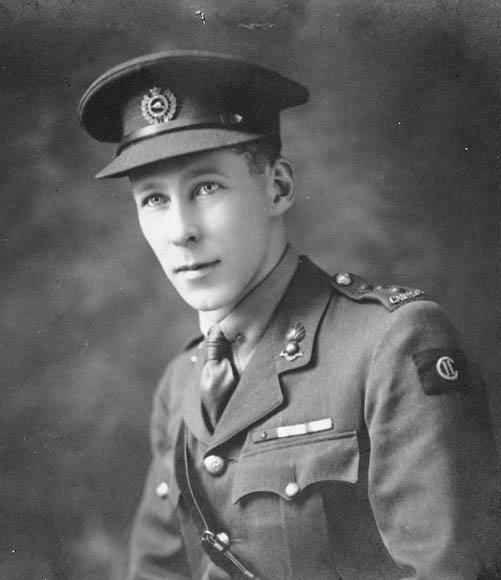 Mitchell’s service in both world wars has been commemorated in a variety of locations. In Manitoba, Coulson Mitchell Lake was named in his honour. In Montréal, a street and a branch of the Royal Canadian Legion bear his name. The main building of the Canadian Forces School of Military Engineering at the Canadian Army Base in Gagetown, New Brunswick, also carries his name.

Mitchell passed away at his home in Montréal on November 17, 1978.

Transcribe war diaries or tag pictures, and give history a hand!

The War Diaries of the Canadian Engineers are open for you to transcribe, tag, translate and describe their contents. Every addition to a record becomes new metadata, searchable within 24 hours, helping Library and Archives Canada’s records become more “discoverable” day after day. Visit the blog article explaining how you can give a hand to history!

Ashley Dunk is a project assistant in the Online Content Division of the Public Services Branch at Library and Archives Canada.