The “hot war” that was the Second World War officially ended on September 2, 1945, with the surrender of Japan. Three days later, on the evening of September 5, the Cold War—or at least public knowledge of what would come to be known as the Cold War—began. On that day, a junior officer at the Embassy of the Soviet Union in Ottawa, carrying assorted documents he had removed from the embassy, attempted to defect to Canada.

The man in question, Igor Sergeyevich Gouzenko, was more than simply a junior diplomat: he was actually a member of the Glavnoye razvedyvatel’noye upravleniye (GRU), the Soviet military’s foreign military-intelligence agency. His main duties as part of the Soviet legation in Ottawa included encrypting and decrypting messages for the GRU head in Ottawa, Colonel Nikolai Zabotin, who, under the guise of being the Soviet military attaché, operated a string of agents in Canada who gathered intelligence for the Soviet Union.

Gouzenko had found out that he was to be returned to the Soviet Union, and feared the possible consequences. He therefore decided to defect, gathering documents that he hoped would show Canadian authorities his value as a source of information on Soviet intelligence activities. Unfortunately for his nerves, and those of his wife, the initial stages of this defection possessed far too much of the farce mixed with melodrama to befit the intelligence he wished to share.

During the 24 hours following his departure from the embassy, Gouzenko bounced from pillar to post, as he attempted to tell his story to the news media, the police and the government. At every turn, he seems to have been stymied. People thought that he was making things up, that someone else should deal with him, or simply that acknowledging him would cause too many problems with the Soviets.

Photograph of the apartment building where Igor Gouzenko lived with his wife in 1945. Photo credit: LAC

The evening of the September 6, 1945, started much on the same note. At first, Gouzenko and his wife hid in their apartment, frightened because they could get no one to take them seriously. Their concerns were heightened when they spotted two men keeping the apartment building under surveillance, and someone knocked on their door and called out. Gouzenko recognized the voice as belonging to another Soviet officer. The Gouzenkos then approached a neighbouring apartment, occupied by a member of the Royal Canadian Air Force (RCAF) and his family, and sought refuge there. The RCAF member offered to go out on his bicycle and seek police help.

Following the departure of the helpful neighbour, the comedy of errors proceeded apace. Initially, it seemed that the appeal from the RCAF member had borne fruit, as two officers from the Ottawa Police arrived and interviewed Gouzenko, who informed them that he had secret information of great value and that the Soviets would do anything to get it back. Perhaps attempting to appease Gouzenko, who by then may have been frantic, the officers informed him that they would keep an eye on the building all night and that, should any problem arise, the Gouzenkos need only turn off the light in the bathroom of the RCAF family’s apartment and help would soon arrive. The officers then left, leaving the Gouzenkos hiding in their neighbour’s apartment. 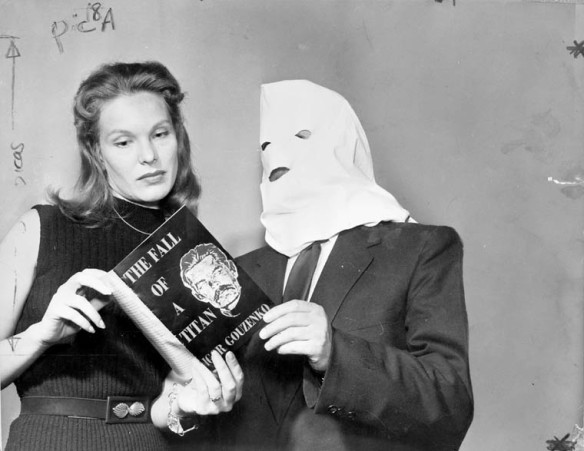 Igor Gouzenko on television holding his book The Fall of a Titan. (a129625)

Just before midnight, the apartment building’s nervous occupants became aware that someone had broken into the Gouzenkos’ apartment, and the intruder could be heard moving about. When the police arrived, they found four representatives from the Soviet Embassy in the Gouzenkos’ apartment, including one who was identified as Second Secretary at the embassy (actually the Canadian head of the Naródnyy Komissariát Vnútrennikh Del (NKVD) [the People’s Commissariat for Internal Affairs], otherwise known as Soviet Internal Security). He was accompanied by the assistant military attaché and two junior figures, one of whom was also a member of the NKVD. The four claimed that they had permission to be there, but had greater difficulty explaining why, if they were there with the Gouzenkos’ knowledge, they had broken the lock on the door in order to enter. Although the Soviets were asked to remain in order to answer questions, they left soon after a more senior officer of the city police arrived to investigate what now seemed to be a much more serious affair.

The next morning, the city police escorted Igor Gouzenko to the offices of the Royal Canadian Mounted Police (RCMP), where Gouzenko shared his story and handed over the documents he had abstracted from the embassy. Now sensitized to the import of Gouzenko’s testimony, the RCMP studied his documents very carefully.

Unbeknownst to Gouzenko, his actions on September 6 had already been brought to the attention of the highest levels of the Canadian government, although had he known the original opinion of the Prime Minister (W.L.M. King) regarding the affair, he would not have been so sanguine. According to a personal note found with Mr. King’s diary, King was informed on the morning of the September 6 that Gouzenko wanted to defect and hand over his documents. King, on his part, decided that taking in the defector would cause too many problems and in any case thought that the claims of a Soviet spy service operating in Canada were no doubt overblown. When told that Gouzenko was distraught and might commit suicide, the Prime Minister directed that a member of Canadian security should watch the Gouzenkos’ apartment and that, if Gouzenko committed suicide, the matter should be left to the local police, but that the secret documents should be secured by the government.

This approach by the government was blown open by the events of that night and the documents Gouzenko shown to the RCMP the next day. Confronted with the information contained therein, the Prime Minister and the security services of Canada, Great Britain, and the United States were shocked at the extent and depth of Soviet espionage activities.

A 1946 Royal Commission of Inquiry into the affair named names, including those of scientists, soldiers, bureaucrats and politicians. By the end of the public inquiry, citizens of the Western Alliance were stunned to find prominent scientists, and even a member of Parliament, named as having betrayed Canada. It was the end of the peaceable kingdom’s hopes for postwar tranquillity and amity among the wartime allies, as relations between the Soviet Union and the West chilled—cooling down into the Cold War.

A photograph of the plaque commemorating Igor Gouzenko and providing information on the Gouzenko Affair. Photo credit: LAC

Daniel German is a senior archivist in the Government Archives Division of Library and Archives Canada.