Canadians were shocked and saddened when Canada’s fourth prime minister, Sir John Sparrow David Thompson (1845–1894), died suddenly during a formal lunch in the United Kingdom, at Windsor Castle. They were honoured when Queen Victoria laid the funerary wreath upon “her dead premier’s” casket with her own hands.

This was a period of shared national mourning. The unexpected nature of the death, combined with the extended, high-profile pomp and splendour of the funerary proceedings—on both sides of the Atlantic—made it the major Canadian news story of the day. Much of the coverage took on an imperial-nationalistic tone. 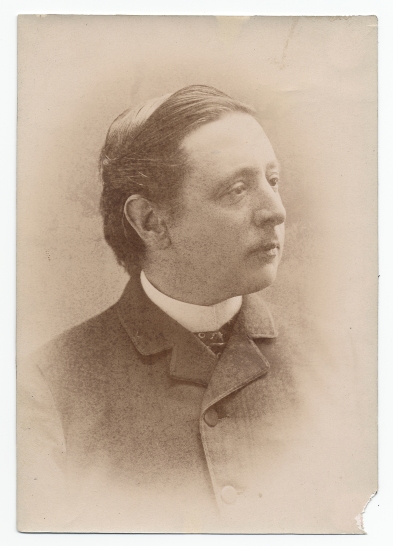 Portraits of Artists from Archives Of American Art, Smithsonian Institution

One Canadian artist, Frederic Marlett Bell-Smith (1846–1923) was inspired to capture the sentiment through a timely and ambitious program of commemorative public art.

Bell-Smith planned and prepared a series of three monumental canvases, which he intended to sell to the Canadian government. Ultimately, Bell-Smith hoped the series would be displayed in perpetuity, either at the National Gallery of Canada or on Parliament Hill.

In each of the three paintings that make up the series, the artist chose to portray one important homage to the dead prime minister. The first, Queen Victoria’s Tribute to Her Dead Canadian Premier, which is known as “The Tribute,” is set at Windsor Castle and centres around Queen Victoria’s official act of laying the wreath on Thompson’s casket.

The second, The Arrival of the Blenheim at Halifax, known as “The Arrival,” portrays solemnities held on the deck of Queen Victoria’s “fastest warship,” the HMS Blenheim. The Blenheim was chosen to convey Thompson’s body back to Canada, with highest honours. The ship’s sides were painted black and its gangway draped in black cloth.

Unfortunately, the only remaining record of this painting is a black and white photograph. The original was destroyed in the Parliament Hill fire of 1916.

The third, and final, painting in the series, The State Funeral of Sir John Thompson at Halifax, known as “The State Funeral,” portrays Thompson’s Canadian state funeral, which was held in Halifax, Nova Scotia, on January 3, 1896. 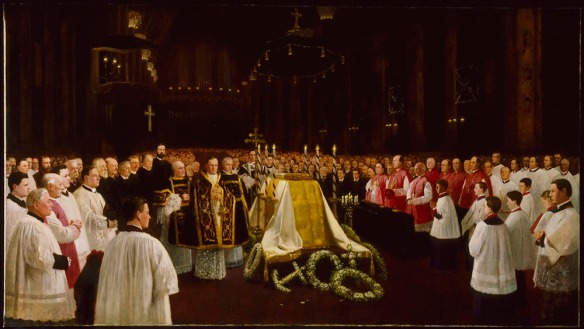 Bell-Smith’s paintings don’t portray Thompson himself: instead they provide accurate portraits of the former prime minister’s most prominent mourners. While these include British royalty (Queen Victoria granted Bell-Smith a life sitting) and court personalities (the queen’s “loyal Indian servant,” Mohammed Abdul Karim (1863–1909), often referred to as “Abdul,” features prominently in the first canvas), the cast is primarily made up of politicians and prominent citizens in Halifax and Ottawa—those with the power to eventually buy the works for the people of Canada.

Unfortunately, Bell Smith’s very attempts to connect the paintings to potential patrons may have led to the failure of his commemoration.

By the time the works were finished, the government had changed hands. As Eva Major-Marothy, former chief curator and senior art archivist at Library and Archives Canada, has written in her important study on the series: “The new Liberal government was not interested in acquiring portraits of its opponents or paintings of activities that glorified them.”

The aesthetic quality of the works may also have been a determining factor. The composition of “the State Funeral” appears especially clunky and forced, perhaps due to Bell-Smith’s overzealous attempts to include every important sitter. In some cases, the size of the figures is exaggerated. In most cases the positions are as unnatural as if the portraits had been cut and pasted from another source. At the time, the then-curator of the National Gallery of Canada felt “unable to recommend their purchase….”

In the end, the entire series fell into obscurity, and two of the paintings were presumed lost for a number of years. But what really happened to each of Bell-Smith’s monumental canvases?

“The Tribute” was purchased by the Women’s Canadian Historical Society of Toronto in about 1914 and donated to the then National Archives sometime before 1931. It was lost in the archives and discovered again much later, during an inventory of large rolled up items. The canvas had been badly damaged, but Library and Archives Canada’s team of conservators was able to restore it expertly… it remains an example of an extraordinary conservation effort.

“The Arrival” was purchased by a senator whose portrait figures prominently in it. After his death, his widow donated the work to the National Gallery, but it was transferred to the Railway Room, on Parliament Hill, where it was destroyed in the fire.

“The State Funeral,” the third and last painting in Bell-Smith’s series, was never sold and remained in the artist’s family. It was donated to Library and Archives Canada by the artist’s descendants in 1997.

Today, the two remaining paintings—reunited in Library and Archives Canada’s collection—provide us with a fascinating insight into the history of public commemoration in Canada.