If you were born before 1980, you may remember a picture of a large industrial complex on the back of the ten-dollar bill. An image of the Polysar (originally Polymer) plant in Sarnia, Ontario, was featured on the bill between 1971 and 1989. The company was created by the Government of Canada in 1942 as a Crown corporation, and its archives are held by Library and Archives Canada. Its history is nothing short of fascinating.

View of pipes and three Horton Spheres storing a mixture of butylene and butadiene used in the manufacture of synthetic rubber at the Polymer Rubber Corporation plant, September 1944 (MIKAN 3627791)

Before the Second World War, almost all of the rubber used in Canada (and around the world) was natural rubber from plantations in Southeast Asia. However, the situation changed drastically during the Second World War. After the Japanese attacked Pearl Harbor in December 1941 and occupied most of Southeast Asia, it became crucial that the Allies find an alternate source of rubber. The only feasible short-term option involved producing synthetic rubber. In Canada, the Honourable C.D. Howe, who had recently been put in charge of the newly created Department of Munitions and Supply, was responsible for overseeing the project.

The task before him—quickly building a plant capable of producing synthetic rubber—required a great deal of daring and ingenuity. Although the chemical processes were already known at the time, an industrial complex dedicated to this type of production had never been built in America. Howe decided to create the Crown-owned Polymer Corporation Limited, which would produce synthetic rubber.

Howe authorized construction of the industrial complex in Sarnia on January 21, 1942. The Sarnia site was chosen because of its strategic location: it was easy to supply it with raw material (petroleum); the main factories producing rubber-based products were located nearby; and finally, large quantities of low temperature water (used in the plant’s cooling system) were easily accessible.

Welder balances on top of a pipe during the construction of extraction towers at the Polymer Rubber Corporation, October 1943 (MIKAN 3626175)

Work progressed quickly, and the plant was officially operational by September 29, 1943. The final phase of construction was completed in February 1944. This was an exceptional achievement given the complexity of the project and the speed with which it was implemented.

Polymer Corporation’s production capacity quickly proved sufficient to supply Canada’s military and civilian needs, making the project a true success. This enabled the Polymer Corporation to continue production after the war, to start exporting its products and to create subsidiaries abroad. The enormous energy devoted to research and development, an aspect illustrated in company archives, also contributed to the company’s success. 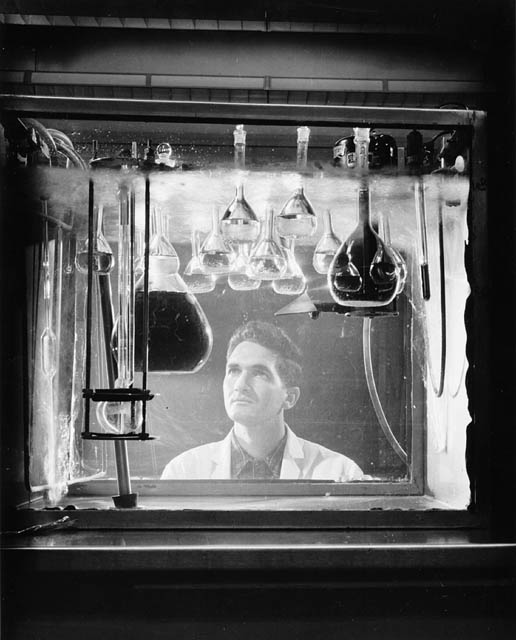 Polymer Corporation Limited ranks among the Crown corporations that have most benefited Canada. Polymer (renamed Polysar in 1973) was finally privatized and sold by the government to Nova Corporation in 1988. The industrial complex currently belongs to Arlanxeo Canada Inc.

François Larivée is an archivist in the Science, Governance and Political Division at Library and Archives Canada.

2 thoughts on “Polysar, or the adventure of producing synthetic rubber in Canada”