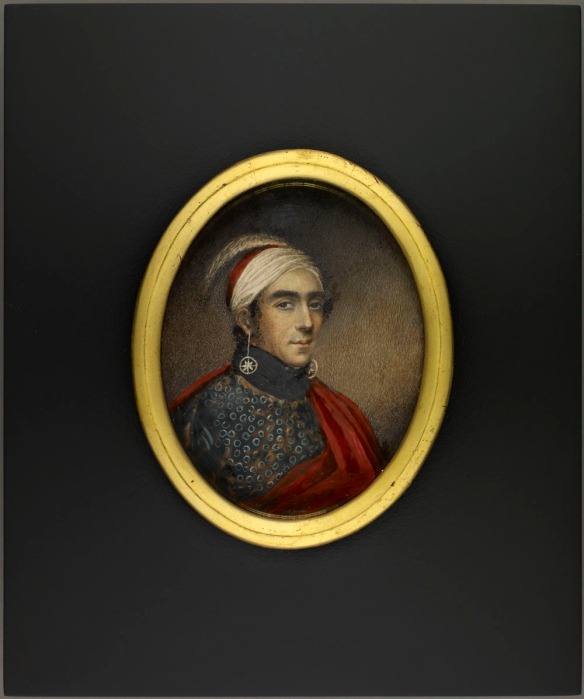 The British public held Romantic ideas about Canada, especially its First Nations peoples. Teyoninhokarawen probably played up to these when he sat for this portrait. Here, he wears his own adapted version of Indigenous dress.

I hail from the Ganaraska Forest. Technically, the address of my family home was in a small village called Campbellcroft, in rural Ontario however the nearest neighbor was over a kilometer away and there was little sense of a village. While there, my parents fostered a strong interest in art and culture. Sadly, while the nearly 12,000-acre Ganaraska forest is a place of much wonder and variety, one thing that one does not find there is a major art gallery with an internationally renowned collection. Consequently, as a teen I toured the world’s galleries through reproductions like those I found in the now rare Carnegie Art Reference Set for Colleges. The media fascinated me as much as the message and I developed an interest in reproductions of art works and their spread and dissemination in Canada. I circuitously followed this interest through my studies and ended up writing about bookworks, or artist’s books as they are variously known in my field. From the study of books and reproductions it was a short leap to library and archival school.

Teyoninhokarawen (ca. 1760–1823) was born John Norton in Salen, Scotland, of Scottish and Cherokee parentage. Military records show he went to Canada, and after discharge from the army in 1788 went to live with the Grand River Mohawk Indians, later becoming the adopted nephew of Joseph Brant. His portrait was painted by Mary Ann Knight, an English miniaturist. It was painted during Norton’s visit to England when he acted as an emissary for the Grand River Mohawks, and it was exhibited at the Royal Academy in 1805.

This portrait is a fantastic gateway into late 18th, early 19th century Canadian history. I chose to write about this item, first because it is so visually appealing. The portrait was painted in Europe where Romanticism is very much part of the spirit of the age and this shines through in the presentation of Norton. It was becoming unfashionable for portraits to depict people wearing contemporary European dress. My knee-jerk point of comparison is Thomas Phillips’ portrait of Byron wearing an Albanian scarf wrapped as a turban—though many of Jean-Etienne “The Turk” Liotard’s brilliant portraits might also serve as interesting comparative foils for this miniature.

Norton’s headwear is this portrait is fascinating in the way it perpetuates then prevailing orientalizing mythologies—naturally at this time drawing connections to Rousseau’s by then famous concept of the noble savage—but also truthfully representing Norton’s transatlantic identity. The feather in the headdress is that of an ostrich. Not a common bird on the shores of the Great Lakes where Norton had been adopted as a Mohawk, nor in his father’s Cherokee territory in Tennessee. Ostrich feathers however were popular as part of headwear in the UK, including in Scotland where, as in John Michael Wright’s portrait of Lord Mungo Murray, they gave the wearer an adventurous look. The feather at once connects Norton to the established visual trope of depicting Indigenous peoples of North America wearing ceremonial feather headdresses, while at the same time, the European inclusion of the imported ostrich feather illuminates Norton’s Scottish side.

All that in just the feather! The rest of Norton’s wardrobe is equally interesting in different ways. This portrait is so rich that there are books full of things Canadians should know! Actually, I would quite literally start by recommending further reading (this is Library and Archives Canada after all). The first book is The Journal of Major John Norton. Norton completed the journal in 1815–16 while in England and it covers a wide range of subjects including his travel from Upper Canada to Tennessee and other southern U.S. states, as well as the frontier wars in the 1780s and 90s. Throughout The Journal, Norton provides an interesting and unique discussion of North America’s Indigenous people. Of particular note is his discussion of Joseph Brandt. Two editions of The Journal have been published, both by The Champlain Society. The more recent edition includes an introduction and additional notes by Carl Benn, who is a preeminent expert on Norton and whose works are a great source for more information.

Another book I would recommend to those intrigued by Norton is The Valley of the Six Nations, also published by The Champlain Society. This book, prepared by Charles M. Johnston, presents a collection of significant documents relating to the Six Nations in the region where Norton spent much of his adult life. It includes many documents discussing the land disputes that the Mohawk people of the Six Nations had with the British and colonial government. Some of documents presented in this volume are by Norton himself, and the originals of many of the documents are in LAC’s archival holdings.

I’ve chosen this portrait of Claus, because his role in Canadian history has been squarely in the opposite corner from Norton. Eight years after this portrait was painted, Claus was appointed as the Indian Department’s Deputy Superintendent General for Upper Canada. In this role, he was very much Norton’s adversary. In Robert Allen’s entry on Claus for the Dictionary of Canadian Biography, he described the relationship between the two as an “acrimonious feud.”

This feud centred around Six Nations claims to land around the Grand River. While correspondence shows that the two came into conflict with each other several times, Claus struck a devastating blow to Norton when he discredited Norton to colonial authorities, thus causing Norton’s trip to England as a representative of the Six Nations to fail. Claus’ criticisms of Norton were not entirely without foundation as Norton did not truly represent the perspectives of all of the chiefs of the Six Nations.

There is a great deal more that could be said, and in fact has been said, in the sources mentioned above and elsewhere about the relationship between Norton and Claus and the Six Nations dispute with the Indian Department. These two portraits are a fascinating entry point into this chapter of history which still has reverberations today.

Shane McCord has worked as an art archivist at Library and Archives Canada since 2010, where the focus of his work has ranged from 17th-century plaques to contemporary art. He has a Master in Art History from Concordia University and a joint Master of Archival Studies and Master of Library and Information Science from the University of British Columbia.