The Spanish flu, a particularly virulent form of influenza, struck Canada in 1918, killing an estimated 50,000 Canadians. It was an international pandemic; an additional 20 to 100 million people worldwide succumbed to the disease before it ran its course in 1920. The virus was brought to Canada by troops returning from the First World War, and soon spread to even remote parts of the country. Unlike most diseases, which typically target vulnerable members of the population, the Spanish flu tended to attack young adults in the prime of their lives. For a country that had already suffered the loss of 66,000 war dead, the impact of the Spanish flu was profound, leaving a number of families without a primary wage earner and thousands of children orphaned.

1918 marks not only the 100th anniversary of the end of the First World War, but also the centenary of the Spanish flu pandemic. It is an opportunity to reflect on this grim chapter in our history. Library and Archives Canada has a number of records in its archival collection documenting the political, social, economic, and cultural impact of the flu on the lives of Canadians.

Library and Archives Canada is also launching a Co-Lab challenge on this topic. Co-Lab is a crowdsourcing tool that invites the public to contribute transcription, translation, tags and description text. The public contributions then become metadata that improves our search tools and enhances everyone’s experience of the historical record.

The images that have been made available as part of this Co-Lab challenge make up a complete file created by federal public health authorities in response to the outbreak in 1918. At the time, public health was primarily the responsibility of provincial and local authorities, with the federal government coordinating quarantine services as a branch within other larger departments (i.e., the Department of Agriculture, and later the Department of Immigration and Colonization). The file includes correspondence documenting various attempts at quarantining ships carrying soldiers returning home from the front. Maritime quarantines, which had successfully contained the spread of infectious diseases in the 19th century, did not prove to be an effective means of controlling the Spanish flu. 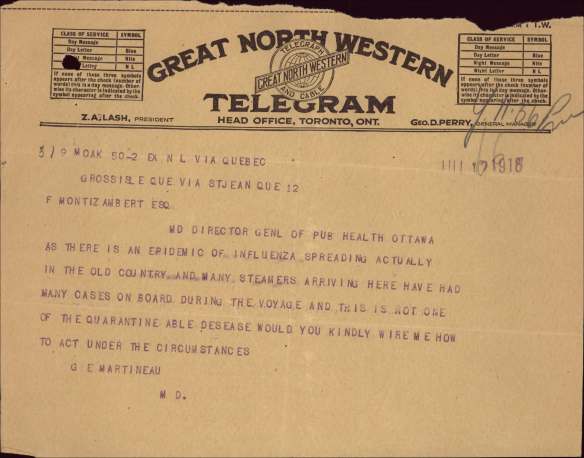 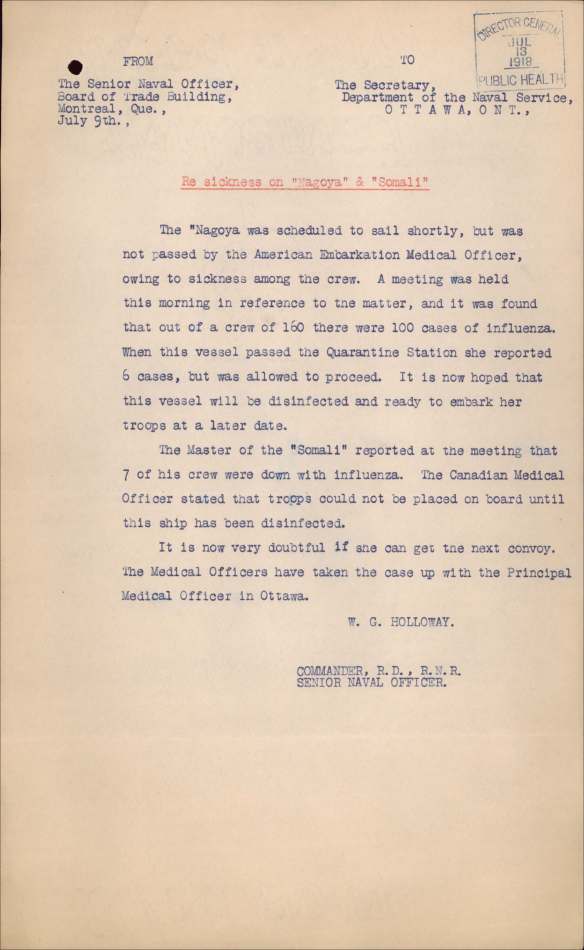 The federal government was widely criticized for failing to provide supplies and coordinate a response to the pandemic. With no vaccine or effective treatment for the Spanish flu, medical practitioners attempting to assist patients and contain the disease looked to the federal government for help. The file demonstrates a lack of coordination by government authorities and a growing sense of urgency amongst medical officials working in quarantine stations across Canada, as the mortality rate rose. This illustrates the need for the creation of a federal department of health, which was established in 1919 as a direct result of this devastating pandemic.

If you are interested in seeing more historical content on the Spanish flu, Library and Archives Canada is hosting a travelling exhibit by Defining Moments Canada, an organization dedicated to providing digital storytelling tools and commemorative activities for Canadians. From September 4 to 24, Struggle Without Rest: Stories from the Spanish Flu Pandemic of 1918–1919 will be available for free in the lobby of the Library and Archives Canada building at 395 Wellington Street in Ottawa.