Signing of the Proclamation of the Constitution Act, 1982 bringing into force the Charter of Rights and Freedoms, by Robert Cooper, 1982 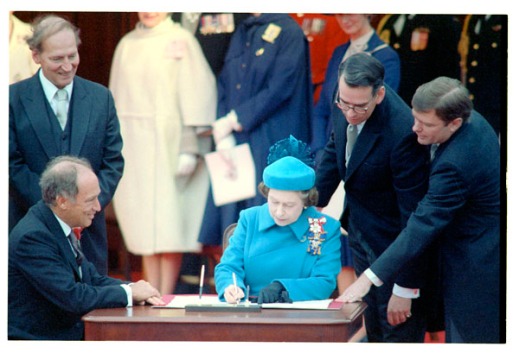 Photograph of the Signing of the Proclamation of the Constitution Act, 1982 by Robert Cooper. (MIKAN 3206003) © Government of Canada

The Signing of the Proclamation of the Constitution Act, 1982, photographed by Robert Cooper in 1982.

Tell us about yourselves

Michael Smith spearheaded an initiative to design and fabricate custom preservation storage cases for two of LAC’s most prestigious documents, both copies of the Proclamation of the Constitution Act, 1982. J. Andrew Ross is responsible for the records of the Registrar General (RG68), which is the repository for all the proclamations of the Government of Canada. 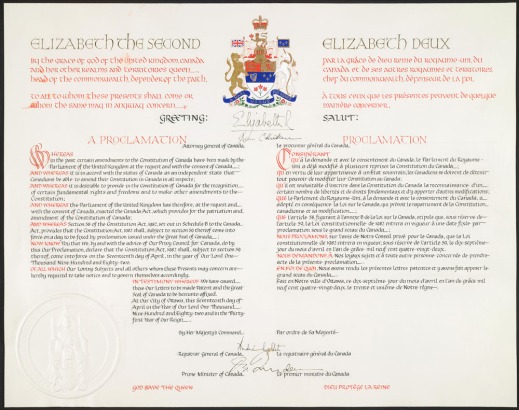 The Proclamation of the Constitution Act, 1982 was signed on the steps of the Parliament Buildings in Ottawa on April 17, 1982 by Queen Elizabeth II, Prime Minister Pierre Trudeau, Attorney General (Minister of Justice) Jean Chrétien, and Registrar General (Minister of Consumer and Corporate Affairs) André Ouellet. The Proclamation, which is the only Canadian foundational document signed by the monarch, brought into force the Constitution Act, 1982, amending Canada’s constitution and enacting the Canadian Charter of Rights and Freedoms. The signing followed several years of constitutional negotiations in Canada that culminated in the patriation of the Constitution, the transmission of full constitutional amendment power from the United Kingdom to Canada.

There are actually two copies of the Proclamation: the one signed outside, which suffered water damage (seen above) and became known as the “raindrop” copy, and another that was signed later inside the Parliament Buildings. Originally pristine, the latter was defaced with red paint by a protestor in 1983, and has since become known as the “stained” copy. Both copies of the Proclamation are held by LAC and have been exhibited extensively since 1982. The raindrop copy was recently on display at the Canadian Museum for Human Rights in Winnipeg and was returned to LAC in early September. In 2017 it will be on display at the Library of Parliament in Ottawa. 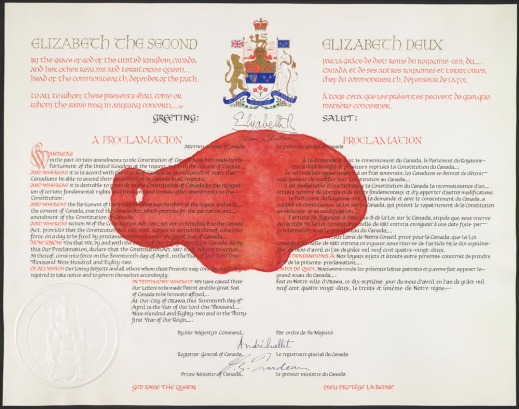 Stained copy of the Proclamation of the Constitution Act, 1982. (MIKAN 3782551) ©Government of Canada

LAC also has the two pens used to sign the raindrop Proclamation. These were donated in 2000 to the National Archives of Canada by Prime Minister Jean Chrétien, who had a special connection to the pens. He later recalled his humorous interaction with the Queen at the signing:

“I picked up the pen and I start to try to sign and it was not working and I said to myself ‘merde’ and she had a big, big laugh,” he said. “Everybody was asking me what the hell you told her that she had such a spontaneous laugh and I refused to say so for years.” (Source)

You can watch the moment of the signing, and the Queen’s reaction here on CBC (after 7:45 minutes), or here on Radio-Canada (about 0:47 minutes). 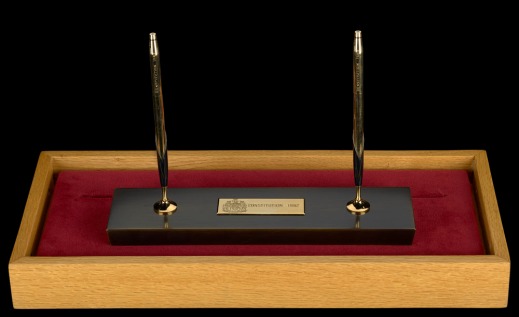 Pens used by Queen Elizabeth II and the signatories of the Proclamation of the Constitution Act, 1982. ©Government of Canada. (MIKAN 4105375)

Although the pens were purchased from Birks’ Jewellers, a high-end retailer in Ottawa, apparently little thought was given to the durability of the ink, and over time the popularity of the Proclamations as exhibit items prompted concern about the fading of the signatures due to cumulative exposure to light. A conservative estimate of total exposure time was approximately 4,000 hours of display for each document at varying intensity levels and from different light sources. By 2011, microfade testing on the signature inks done by the Canadian Conservation Institute indicated that the synthetic dyes used in the ink are susceptible to fading, and had almost certainly done so since 1982.

Fading ink has affected several important signatures on historical documents held at LAC, but while many remain on limited circulation, the importance of the Proclamations prompted a project to fabricate a custom storage case and a secure display case that would keep the documents safe from future harm.

It was decided to design and construct two permanent storage cases, one for each copy of the Proclamation. In addition, one secure display case would be made for exhibition purposes (it was anticipated that only one Proclamation would be on display at any one time.) The storage cases can be hermetically sealed to accommodate a low-oxygen environment (which might be implemented in the future to slow fading), and are glazed with UV filters and anti-reflective glass. In addition to security, the display case also incorporates features to limit and monitor light levels. With these new cases, Canadians will be able to see the Proclamations on display for years to come. 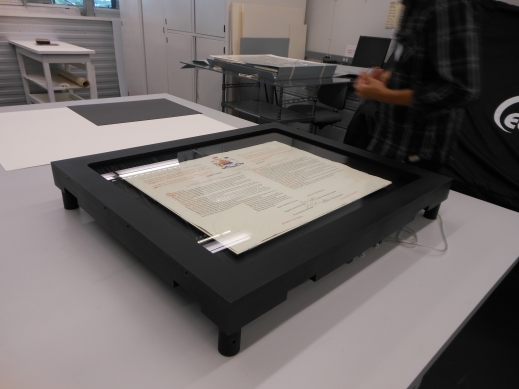 Preservation storage case for one copy of the Proclamation. © Government of Canada 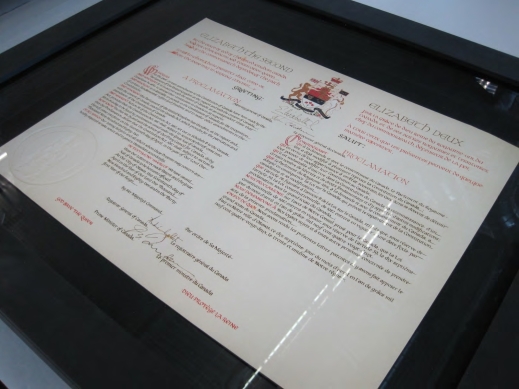 Close up of the preservation case. © Government of Canada

The case of the Proclamation has also led to a change in LAC’s approach to signature preservation. While many Government of Canada documents are now signed digitally, most of the prestigious documents are still signed in ink. Concern over the permanence of these signatures led the Librarian and Archivist of Canada, Dr. Guy Berthiaume, April 14, 2016 email to advise government departments to use pens with lightfast pigmented ink of high permanence for signing official and prestigious documents. He cited the case of the Proclamation of the Constitution Act, 1982 as a prime example of the risk of fading, and advised that special attention be paid when choosing pens to sign official documents, “particularly documents of national importance destined for our archives…to ensure the documents placed in our care remain in legible condition for future generations.”

In 2009, Library and Archives Canada acquired an original copy of the famous “Kitchen Accord”, handwritten by Roy Romanow. On the occasion of the 30th anniversary of the proclamation of the 1982 Constitution Act, we are pleased to offer to the Canadian public a digitized copy of this document that played a key role in one of the most important moments of Canada’s constitutional history.

April 17th, 2012, marked the 30th anniversary of the proclamation of the 1982 Constitution Act. This event concluded a two year process involving intense negotiations between the federal government and the provinces on the proposal to “patriate” the Constitution to Canada.

The constitutional conference, which was held November 2 to 5, 1981, hoped to put an end to the negotiations. No significant progress was made during the first two days of the conference, and the negotiations seemed to be heading to a dead-end. But the public pressure on the parties to reach an agreement was very strong so many last minute compromise proposals were submitted to parties, especially on November 4. An agreement took shape during the night of November 4 to 5. This agreement would be signed the next day by all parties, except by representatives from Québec. One of the most important, and probably the most famous of these last minute compromise proposals, is the “Kitchen Accord”, drafted during the afternoon of November 4 by Jean Chrétien, Roy Romanow, and Roy McMurtry, respectively federal Minister of Justice, Attorney General of Saskatchewan and of Ontario, in a kitchenette of the National Conference Centre, where the discussions were held. This draft agreement included patriation, amendment formula, Charter of Rights, and a “Notwithstanding” clause that would only apply to some parts of the Charter. There is also a reference to minority linguistic rights that were much debated during the negotiations.

Questions or comments? We would love to hear from you!