By Thora Gustafsson and Rebecca Sykes

The Right Honourable Adrienne Clarkson is best known as a former Governor General of Canada (1999 to 2005), but she has been in the spotlight for many more reasons throughout her life. As a refugee, a household name at the Canadian Broadcasting Corporation (CBC) and Ontario’s first Agent-General in France, she touched the lives of Canadians long before she became a resident of Rideau Hall.

Adrienne Clarkson, née Poy, was born in Hong Kong in 1939. Following the surrender of Hong Kong on Christmas Day 1941, the Poy family lived under harsh conditions with little food during the Japanese occupation. Adrienne’s father, William Poy (Ng Ying Choi), had been a message courrier in the Volunteer Militia working for the British. He used his connections to write to Canadian trade commissioners in search of an escape for his family. Eventually, William, his wife Ethel Lam (Lam May Ngo), Adrienne and her older brother Neville were placed on a list alongside Canadian citizens to be exchanged by the Red Cross. With only 10 hours’ notice and one suitcase each, the Poy family left by ship for North America. A publicity photograph in Clarkson’s fonds shows her, only a few years old, eating an ice cream cone on her first stop on Canadian soil in Montréal. In her 2009 memoir, Heart Matters, Clarkson writes that the night her family was informed that they were to be exchanged was a formative moment in her and her family’s story.

From a young age, Clarkson was a prodigious reader. In interviews, she has frequently remarked that her idea of hell is being trapped with nothing to read, and that she could read seven or more books in a week: “I read the way other people bite their nails, compulsively and voraciously” (R12308, vol. 159, file 13). At age nine, she was gifted a copy of Lucy Maud Montgomery’s Anne of Green Gables, and like for so many immigrants to Canada, the book became a favourite and a touchstone for understanding Canada and its people. Clarkson went on to earn a master’s degree in English literature from the University of Toronto and to lecture in the English department there. This led to her career in television.

Hired by CBC’s “Take 30” television series as a book reviewer in 1965, she was quickly promoted to co-host. There, she and Paul Soles discussed a broad range of topics including books, motherhood, cooking and issues of the day, such as abortion and illegal drug use. While on the show, she also discussed issues that are still very close to her heart, such as the first French-immersion schools and the experiences of immigrants in Canada.

In looking at the documents, it is clear how connected she felt to her viewers. In an article she wrote for the Winnipeg Free Press in 1966, she said she often thought of the so-called average viewer “as a third person in the conversation, someone you might meet at any party—pleasant and interested.” That sense of connection clearly went both ways, judging by her collection of letters from viewers. One viewer, who wrote on behalf of herself and her husband, compared watching “Take 30” to “having a friend come into our home.” The show also aired several episodes dealing with pregnancy and motherhood, which Clarkson co-hosted while she was an expectant mother. Many of the show’s fans were mothers themselves, and both new and experienced mothers wrote her letters with advice and book recommendations.

In 1982, Clarkson left her 17-year career in broadcasting at the CBC to become Ontario’s Agent-General in France. Clarkson is a lifelong Francophile. Photographs in her fonds show her family’s friendship with their French-Canadian neighbours and her travels through France as a young woman. Clarkson also studied the French language, achieving fluency during postgraduate work at the Sorbonne in Paris in 1962. In her position as Agent-General, Clarkson was responsible for promoting Ontario’s economic and cultural interests in France and other European countries. One of her proudest moments was when up-and-coming Uruguay-born, Toronto-based Canadian architect Carlos Ott was selected as the winner in an international design competition for the new Paris Opera in 1983. Through her work as Agent-General, Clarkson secured the budget to bring the competition judges to Toronto to counter their perception of Anglo-Saxon Canada and show them what a prosperous and diverse city it was. 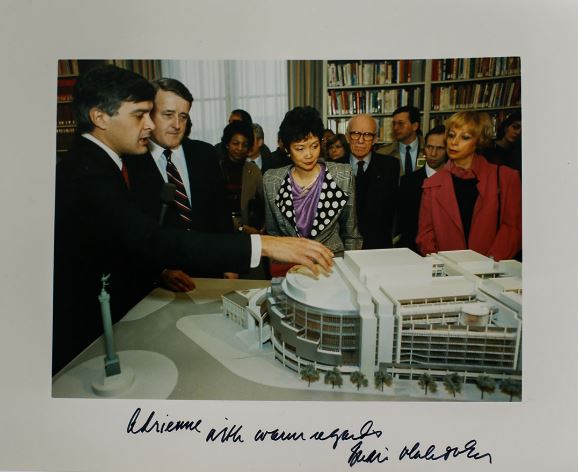 In 1999, Clarkson became Canada’s 26th Governor General since Confederation. The second woman to take up the post, and the first immigrant and person of colour to do so, she is credited with modernizing the role. She continued her efforts to connect with Canadians by travelling across the country to speak to individuals in person, which she was able to do fluently in both English and French.

Going through the Adrienne L. Clarkson fonds, from her youth through her time in broadcasting and her Agent-General days, shows how consistent Clarkson has been on issues that have interested her throughout her life. As an immigrant, broadcaster, Ontario’s Agent-General, Governor General, and co-founder of the Institute for Canadian Citizenship—her legacy project as Governor General—Clarkson has thought long and hard about being Canadian and what it means to belong here. Her early research on topics for “Take 30” was clearly informative for her later work and causes. Her lifelong love of the French language served her in her public service career and as Governor General in connecting with Canadians. Her records at Library and Archives Canada are rich sources of information that document Clarkson’s passionate and adventurous life.

Thora Gustafsson and Rebecca Sykes are archivists in the Governance, Military and Political section of the Archives Branch at Library and Archives Canada.

The year 2016 marks the 100th anniversary of women first winning the right to vote in Canada. On January 28—the date that Manitoba became the first province to pass women’s voting rights into law—Library and Archives Canada (LAC), in partnership with the Canadian Museum for Human Rights, will officially launch an outdoor exhibition titled Let Them Howl: 100 Years of Women’s Suffrage.

The exhibition will feature reproduction portraits of some of the women who fought for equality and the vote. Be sure to check out the exhibitions January 28 to February 15, 2016 on the Rideau Canal Skateway in Ottawa (presented in partnership with Winterlude) and February 12–21, 2016 at the Festival du Voyageur in Winnipeg.

The exhibition features reproduction portraits from LAC’s collection of historic figures like Nellie McClung and Agnes Mcphail to modern women who have broken gender barriers, such as Adrienne Clarkson and Beverley McLachlin.