Charles William Jefferys (August 25, 1869 – October 8, 1951) determined that Canada needed a visual history and a national mythology and he would create it. He chose to portray Canada’s epic events of discovery, courage, war and nation-building. His images placed an almost mythological importance on the nation’s historical events.

In the early 20th century Canadians struggled to define what it meant to be Canadian and how to express their budding feelings of nationalism. Jefferys’ work reflects this and; his historical illustrations are an expression of this growing nationalism. They are representative of the period, and may not be how we would define ourselves today.

Some of his illustrations were faithfully copied from existing images such as portraits or photographs, while others were based on meticulous historical research on period costumes. In either case, he strove to accurately portray all aspects of early Canadian life. END_OF_DOCUMENT_TOKEN_TO_BE_REPLACED

The son of a commercial lithographer, Frederick Horsman Varley was born and raised in the steel town of Sheffield, England. Varley’s talent as an artist was recognized early when, at the age of 11, he was enrolled in the Sheffield School of Art. By the time Varley was 21, he had completed three years of fine arts study at the Académie Royale des Beaux-Arts in Antwerp, Belgium. Before immigrating to Canada in 1912, Varley had worked as a commercial artist in London, England, as well as an art teacher in his home town of Sheffield. 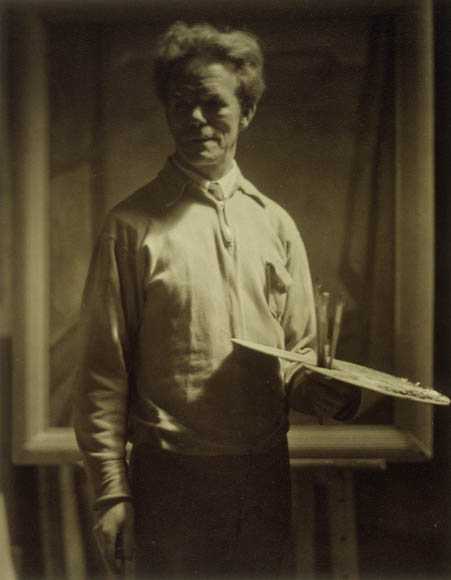 END_OF_DOCUMENT_TOKEN_TO_BE_REPLACED

Canadian artist Frederick Bourchier Taylor (1906–1987), was a man of many interests and many talents. He was born in Ottawa and mostly raised there; living briefly in London, England from 1916 to 1918 after his father was transferred there during the First World War. Upon returning to Ottawa, he graduated from Lisgar Collegiate in 1918. He became a student of McGill University in 1925 after his parents asserted that he must complete university before embarking on any sort of artistic career. While at McGill, Taylor studied architecture and developed a keen interest in skiing and boxing. As a testament to Taylor’s many talents, in 1927 he was awarded McGill’s Anglin Norcross Prize for drawing, and also became the university’s heavyweight boxing champion.

After graduating in 1930, Taylor studied, exhibited and worked in Britain as well as Canada, finally settling in Montreal by 1937. During this period, he earned a living by teaching drawing at the McGill School of Architecture and painting portraits.

After war broke out in 1939, Taylor began an unsuccessful lobbying campaign in an attempt to get the Canadian Government to put into place an officially sanctioned war-art program. Undeterred by the Government’s refusal, Taylor used his artistic talent as well as family connections (his brother was Canadian businessman and millionaire E.P. Taylor) to gain access to and document Canadian Pacific Railway′s Angus Shops in Montreal, along with several Canadian shipyards and other Canadian war industry factories. 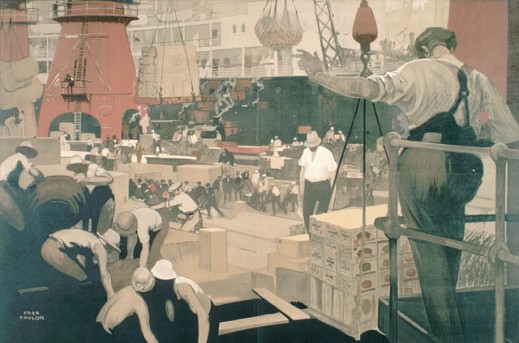 During this period, Taylor was able to paint over 200 works that document the diverse, strenuous, and often unrecognized or under-appreciated work done by Canada’s factory workers. Library and Archives Canada has some of these works in its art collection. These paintings consist of 19 small-sized studies along with eight larger finished works documenting factory workers in the fur and garment industry of Montreal during the 1940s. In these works, Taylor has used a muted palette of industrial greens, browns and greys. Taylor has demonstrated an extraordinary ability to capture not only the industrial atmosphere and harsh fluorescent factory lighting, but also the intense look of concentration on the faces of the workers.

Taylor continued his artistic career after the War, exhibiting and participating in shows mostly in Quebec and Ontario. In 1960, he moved to Mexico where he tried his hand at sculpture and silk screening. Frederick Taylor died by suicide in Mexico, in 1987.

Different approaches have been tried over the years for conserving sketchbooks or bound volumes. For a long time, the works were simply detached in order to remove the binding. Nowadays, the historical and archival value of the binding is widely recognized. Library and Archives Canada (LAC) is no exception in this regard, and conservation treatments are now designed to preserve the work in its entirety, including the binding.

The sketchbooks therefore are undergoing various conservation treatments, undertaken by a team of LAC’s highly specialized conservators in the field of book conservation and restoration. These conservators worked with the collection managers and archivists to respect the integrity of Stark’s work, and to give him his full moment of glory.

The drawings and watercolours in this collection are in very good condition. Some even look like they might have been completed only a few days ago. It should be noted that the sketchbooks remained closed for nearly a hundred years, and that the pages were rarely exposed to air or light. Thus, to study a Stark work is to travel through time, to see the work of an artist exactly as it was created a hundred years ago, during one of the most deadly and crucial wars of our time.

In sum, the restoration work done by LAC‘s conservation and restoration team will make it possible to stabilize the condition of the sketchbooks in order to ensure that they will withstand the ravages of time, and will allow future generations to have access to an important part of our history.

Example of a required restauration treatment: the adhesive tape must be removed.
© Library and Archives Canada

Another example of a required restauration treatment : the cover must be sewn back on.
© Library and Archives Canada

Canada’s experience of the First World War was captured by officially commissioned artists such as A.Y. Jackson and David Milne from 1916 onwards through the Canadian War Memorials Fund. However, many other artists—amateur and professional—captured their experiences of the war while they were busy fighting, building roads, transporting goods or providing care to others, but still creating vivid imagery of the world around them.

The William Redver Stark fonds at Library and Archives Canada (LAC) is a rare illustrated record of one of these undeclared artists’ lives in the military. Through 14 sketchbooks of remarkably well-preserved drawings and watercolours, we discover the life of a soldier through his eyes, which were closer to the action than those of his official counterparts, and which provide a more spontaneous, intimate perception of how day-to-day activities may have looked.

In these sketchbooks, we find images of soldiers at work and at rest, captured German prisoners and artillery, landscapes through which battalions moved, and sights at the London Zoo where Stark went while on leave. The illustrations serve as a rich and indispensable complement to the artist’s military file, to his battalion’s history, and to our visual understanding of a serviceman’s experience during the First World War.

The William Redver Stark fonds was donated to Library and Archives Canada in 2005 by his nephew, Douglas Mackenzie Davies and his family: his wife, Sheila Margaret Whittemore Davies, and their two sons, Kenneth Gordon Davies and Ian Whittemore Davies.

How to search the sketchbooks

All 14 sketchbooks of the William Redver Stark fonds have been individually described and digitized, making it easier to search for themes or types of scenes. For example, you can search the fonds for all images that contain bridges or construction.

To search the sketchbooks, go to the advanced archives search and in the drop-down menu under “Any Keyword,” enter either the archival reference number (R11307) or the MIKAN number (616998). If you want to narrow down your search even more, enter a keyword such as “bridges” in the second box.

Be sure to read William Redver Stark: Restoring the Sketchbooks to learn more about the work done by LAC’s conservators to restore the sketchbooks.

It has been 90 years since Mary Riter Hamilton donated 180 of her oil paintings and dozens of her chalk, pastel and pencil drawings depicting the devastation in Europe after the First World War to the Public Archives of Canada (now Library and Archives Canada). These works by Riter Hamilton are not light-hearted. The subject matter deals almost exclusively with the destruction of war. They depict muddy trenches and blighted landscapes, graves and cemeteries, churches and towns ripped apart from shelling. 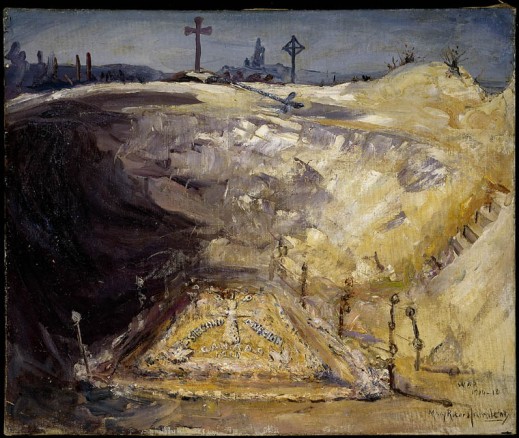 Memorial for the Second Canadian Division in a Mine Crater near Neuville St. Vaast (MIKAN 2836007)

Mary Riter Hamilton was born in 1873 in Teeswater, Ontario and grew up in Clearwater, Manitoba where her family moved to farm. She married Charles W. Hamilton at the age of 18 and by the age of 23 was widowed. It was soon before the death of her husband that Mary began attending art classes in Toronto. Recognizing her talent, most of her European-trained teachers urged her to further her studies in Paris. Mary studied first in Germany then moved to Paris where she lived and studied for the next eight years. Mary returned to Manitoba for a year in 1906 then again for eight years in 1911. During these years, Mary’s work was exhibited in galleries in Montreal, Ottawa, Toronto, Winnipeg and Calgary.

Always wanting to return to Europe, it was in 1919 while Mary was living and working on Canada’s west coast, that she was offered a commission by the Amputation Club of British Columbia to provide art work for The Gold Stripe, a veteran’s magazine. Mary left immediately, “ … to paint the scenes where so many of our gallant Canadians have fought and died.” For three years, Riter Hamilton worked tirelessly in post-war France and Belgium, painting battlefields including Vimy Ridge and the Somme, Ypres and Passchendaele. Conditions were harsh. She lived in make-shift shelters while enduring foul weather and meagre rations. She returned to Canada physically and emotionally spent. Refusing to sell her paintings, Riter Hamilton donated her work to the Public Archives of Canada. She died, poor and visually impaired, in 1954.

As the centenary of the First World War approaches, these works take on a renewed poignancy. Mary Riter Hamilton was never an official ‘war artist’ yet through her courage and talent and indomitable dedication, the sombre beauty and mournful tone of her collection serve as an enduring account of the ravages of war.

To learn more about Mary Riter Hamilton, to view more of her work, or to see what materials are contained in the LAC collection, visit: