So far, 2017 has been quite the year in Canada. In addition to countless public conversations, gatherings and events, 2017 has seen many significant legacy projects undertaken to commemorate our country’s sesquicentennial, such as the opening of the Global Centre for Pluralism, or the reopening of the Canadian Science and Technology Museum. Watching the realization of these new legacy projects, it is worth remembering that 2017 is also the fiftieth anniversary of thousands of similar projects from Canada’s centennial year of 1967.

We, at Library and Archives Canada (LAC), can appreciate first-hand the importance of 1967 legacy projects. Our own building at 395 Wellington Street, along a corridor which includes Parliament and the Supreme Court, was opened in 1967 as a centennial legacy project. We have had the pleasure this year of celebrating this Jubilee and reflecting upon how this space has allowed us to collect, preserve, and tell the story of Canada. While our building was certainly a significant legacy project to Library and Archives Canada, it was not the only legacy project our institution was a part of.

As the curator of the Jacob M. Lowy collection of rare Judaica, the centennial legacy project I experience regularly is the Judaica collection gifted to the then National Library by the then Canadian Jewish Congress on behalf of the Canadian Jewish community. A gift I am reminded of constantly as I open reference works I use to see the blue, white, and red bookplate indicating that the volume in my hand was part of the gift.

Reading archival documents from the Canadian Jewish Congress, held in the Alex Dworkin Canadian Jewish Archives, it was clear that it was extremely important to the Canadian Jewish community to contribute to the centennial year and give back to Canadians. Dr. W. Kaye Lamb, the first National Librarian, was very appreciative of this gift, feeling it met a long identified need at the National Library, noting that many other national libraries had similar collections.

This gift of approximately 7,000 volumes, in a mix of English, French, Yiddish, and Hebrew, encompassed all areas of Jewish scholarship, such as rabbinic literature, Jewish philosophy, Jewish history, Yiddish classics, Hebrew literature, selections representing Jewish contributions to the arts and science, and important encyclopaedias and reference works. Highlights include a general encyclopedia in Yiddish, the Encyclopedia Talmudit, and Cecil Roth’s Jewish Art. All the books were selected, catalogued, and delivered in time for the new building’s opening. To this day, this donation forms the foundation of our Judaica holdings and serves as an important reference tool used constantly by LAC staff and clients. Users can request and consult these and other items from Library and Archives Canada holdings on site in the main building at 395 Wellington Street, Ottawa.

Legacy of the gift

While many of the centennial legacy projects focused on physical buildings, it is very appropriate that Canada’s Jewish community chose to dedicate their resources to building the Judaica collection at the National Library. The Jewish people have long been referred to as the people of the book and their history, culture, and religious practices have been inseparable from the written word for thousands of years. Beyond a gift of physical items, this gift allowed for an expansion of the Judaic information and content available to all Canadians and an immeasurable legacy of knowledge. While many of the physical structures built in 1967 will eventually disappear from our country’s landscape, the knowledge that developed as a result of this donation of books has the potential to continue for centuries to come. 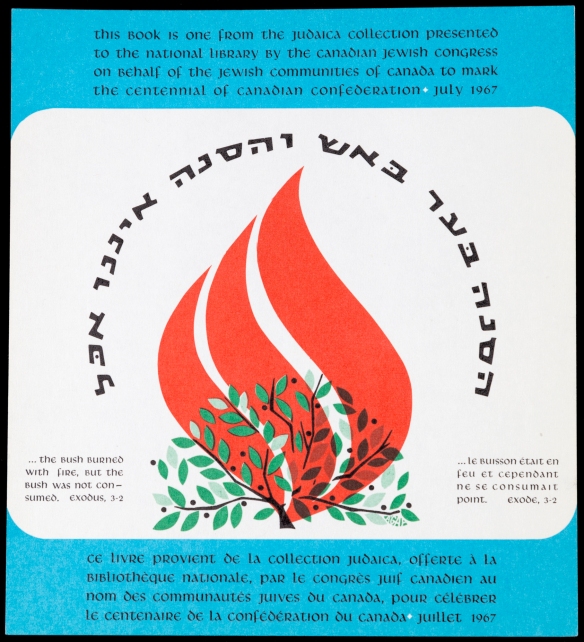 The custom bookplate for the Judaica books donated from the Canadian Jewish Congress to the National Library of Canada to commemorate the centennial of the Canadian confederation.

In 1965, at the laying of the corner stone for the new building, Governor General Georges Vanier stated that “…this building will become the repository of the very heart and spirit of our country.” How fitting that in time for the opening of this new building, the Canadian Jewish community was able to deposit in this structure a part of their own heart and spirit, in book form, to be shared with all Canadians.

Michael Kent is curator of the Jacob M. Lowy collection at Library and Archives Canada 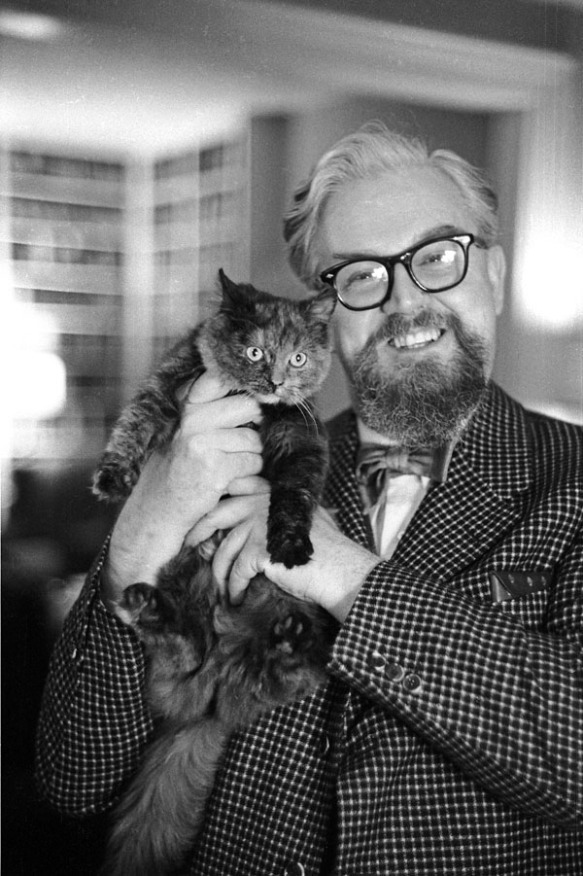 The play was divided into many scenes depicting the regions and provinces of Canada and involving fictional characters and dancers representative of Canada’s diverse linguistic and cultural communities. The play was accompanied by an original score written by Canadian composer Keith Bissell.

Handwritten draft of the cover page of a draft version of The Centennial Play, with drawings by Robertson Davies, circa 1965 (MIKAN 128551)

Typescript of The Centennial Play annotated by Robertson Davies, circa 1966 (MIKAN 128551)