Brodie Macpherson, born Archibald Brodie Macpherson, nicknamed “Handlebars” (presumably for mustache-related reasons), was a notable figure in Canada for his role in the photographic community during the rise of colour printing.

Born in Toronto, Ontario, on November 26, 1909, to University Professor Walter Ernest and Elsie Margaret Macpherson, Brodie was the eldest of three children and the first to attend the University of Toronto. He enrolled in the Faculty of Applied Science and Engineering in 1927 and graduated in 1931. He would go on to serve as a member of the Royal Canadian Air Force in the Second World War before returning home to start his photography business in early 1946. Macpherson’s engineering background, in conjunction with his subsequent years of experience working in the lithography business, would serve him well in the colour printing trade.

The rise of colour photography

Colour photography began to gain momentum in the mid-1930s with the advancement of colour transparencies. Colour prints were also possible at this time, but they were far less popular with photographers than black-and-white prints. The process of making and printing separation negatives was too expensive and complicated for most hobbyists, and the finished prints were rarely worth all the effort for professional photographers. Portrait and scenic photographers were certainly not interested in spending a small fortune to produce prints that critics would frequently describe as garish, vulgar, and unnatural. 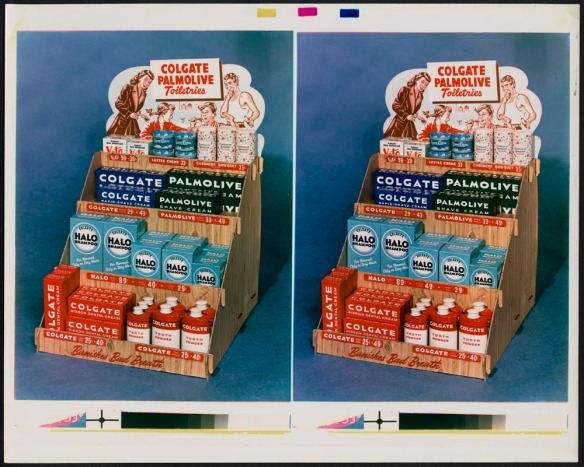 Despite its many shortcomings, colour truly excelled in the realm of advertising. While bright and clashing colours can be visually jarring, they are also excellent for attracting attention. During this era, colourful photographs increasingly adorned the pages of magazines, billboards, and sales tools.

Advertising was ideally suited for colour, since much of it involved bulk orders, where repetition and quantity could distribute the high cost and complexity of making an initial print over multiple copies.

In February 1946, rather than resume his pre-war employment with Harris Lithography, Macpherson, embarked on making and selling quantities of colour photographs using modified versions of Eastman Kodak’s Wash-off Relief and Dye Transfer processes. Given the operational similarities, a background as a lithographic camera operator proved particularly useful in this work.

Macpherson’s business approach was simple: provide the best possible product for the lowest reasonable price. This goal was achieved by

Macpherson built his own one-shot colour separation camera, which allowed him to expose three plates behind different coloured filters simultaneously. Otherwise, the exact same photo would need to be taken successively for each filter colour. (e011312590)

From the outset, clients considered the quality of Macpherson’s colour prints to be strong, and his prices—while still more expensive than those of black-and-white or hand-colour photographs—reasonable. His price lists were consistently lower than those of other colour-printers in the area, and remained unchanged for the duration of the business. Over the next 18 years, Macpherson would go on to fill orders for clients from all over Canada and from the United States. 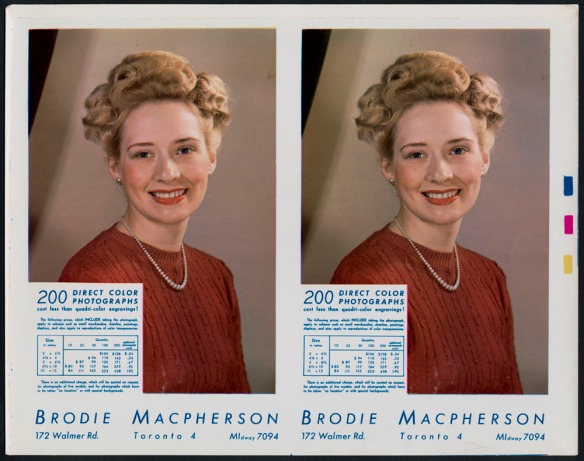 An advertisement and price list for ordering coloured photographs from Brodie Macpherson.
(e011312588)

The colour studio, located at 172 Walmer Road, in Toronto, in the basement of his family home, operated officially until Macpherson’s retirement in 1964.

According to the President of the Toronto Camera Club, Frank E. Hessin, Macpherson was “unquestionably [the] driving force in the [Toronto Camera] Club” for the promotion of colour prints. In 1946, he proposed the creation of—and subsequently chaired—the TCC’s Colour Print Group. Over the next several years, he employed the TCC’s facilities to teach the colour separation process to anyone willing to learn.

Brodie Macpherson and Miss 1948, Lialla Raymes, during a skit portraying the changing trends in photography to mark the 60th Anniversary of the Toronto Camera Club. (e011310464)

Everett Roseborough, a fellow TCC member, writes the following characterization of Macpherson, which echoes throughout the correspondence and articles in the Brodie Macpherson fonds (R791).

“Opinionated [and found] seated in the back row at photographic society meetings, stroking his moustache, he could be counted on to object to something. Following a concerted groan by those present, frequently he would be proven correct.” (Photographic Historical Society of Canada, 1994)

Ever the son of a university professor and librarian

Undeniably clever, Macpherson would readily share information and freely offer his opinion and advice. He was an invaluable resource, as photographers active during this era considered Macpherson to be the best colour photographer / printer in the city.

Over the years, as colour-photography technology continued to improve in speed and accuracy, Macpherson’s skills in this area and his knowledge of colour-print specifications continued to be recognized. He regularly shared his research findings and encouraged discussion through various photography publications, private letters, photography clubs, public lectures, and evenings in his studio accompanied by records and top-shelf scotch.

An early colour photograph by Brodie Macpherson demonstrating the layering of yellow, magenta, and cyan to achieve a full-colour print. (e011312589)

Already spending most of the winter months in Barbados, Macpherson semi-retired from the printing business in 1964, at the age of 55. While he was no longer accepting any new business, during his time in Toronto, he would still fill orders of reprints from existing negatives for previous clients. 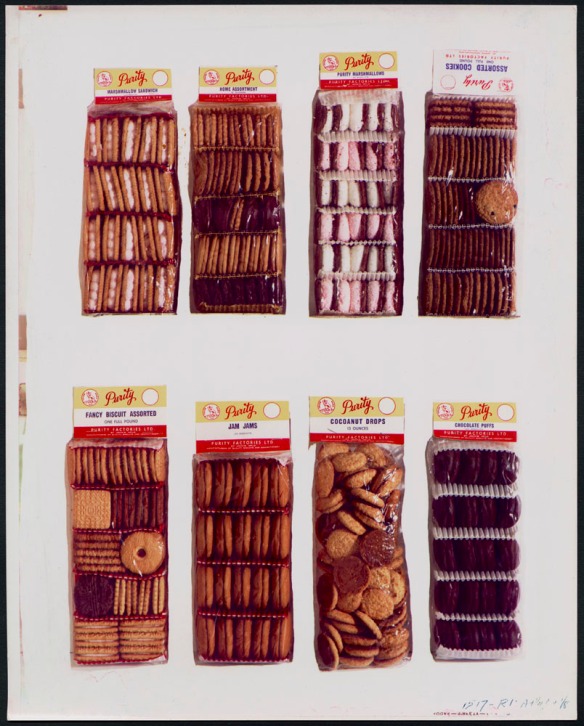 A series of promotional prints commissioned by Purity Factories Ltd., Saint John’s, Newfoundland and Labrador. The company placed several orders with Macpherson, and continued to request reprints until 1970. (e011312592)

By the late 1960s, the photographic processes used by Macpherson had largely been replaced by Kodak’s new—and simpler—Ektacolor material. As a result, it became increasingly difficult to obtain the necessary supplies in Canada, and the reprinting stopped altogether.

A recluse by nature, Macpherson quietly closed up his home and studio sometime in the 1970s, reportedly moving to Florida without a trace (Roseborough, 1994). Subsequent efforts to locate Macpherson in Toronto, Florida, and Bermuda post-1970 were unsuccessful.

Macpherson’s successful career in colour photography, particularly during a period of rapid technological development, is a true testament to his entrepreneurial spirit, his dedication, and his mastery of the craft.

Samantha Shields is a Photo Archivist in the Social Life and Culture Division at Library and Archives Canada.