To glean the most information from a Canadian census return, start by reading the Instructions to Commissioners and Enumerators. At first glance, this publication may seem dry, but it is anything but! By informing themselves on what instructions were given to the commissioners and enumerators, genealogists can learn more about their ancestors, gather more clues, and understand why their ancestors responded as they did. Don’t forget that there will always be exceptions to the rules, as not all enumerators interpreted the instructions the same way.

Here are some of the highlights:

Column 3 – Names of each person in family, household or institution 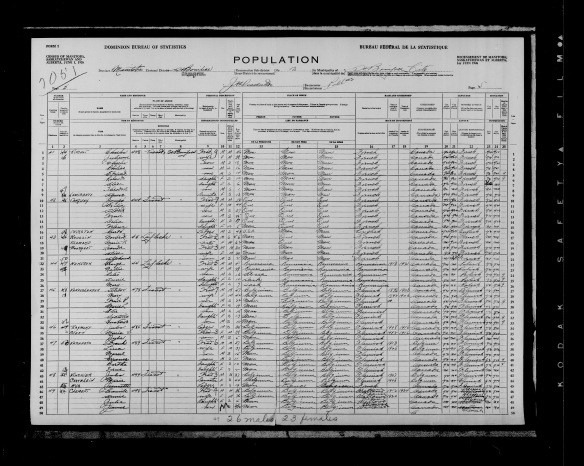 A page for St. Boniface, Manitoba, from the 1926 census of Manitoba, Saskatchewan and Alberta. Note the entry for Jules Vinckier, who was enumerated as head of a household that included a domestic and a lodger. (e011228052)

The 1926 Census of Prairie Provinces lists “the names of every person whose usual place of abode on June 1, 1926 was with the family or in the dwelling house for which the enumeration is being made.” The key point in that sentence is that the person must call the home for which the enumeration is being made their “usual place of abode.” Genealogists should keep that in mind when searching for families with older children, as they may have struck out on their own by 1926. This also includes lodgers and those employed as domestic help or as a servant.
Dwelling houses could also be considered institutions, such as “hospitals, poorhouses, asylums for the insane, prisons, penitentiaries, schools of learning, military barracks, homes for the aged, homes of refuge, etc.” 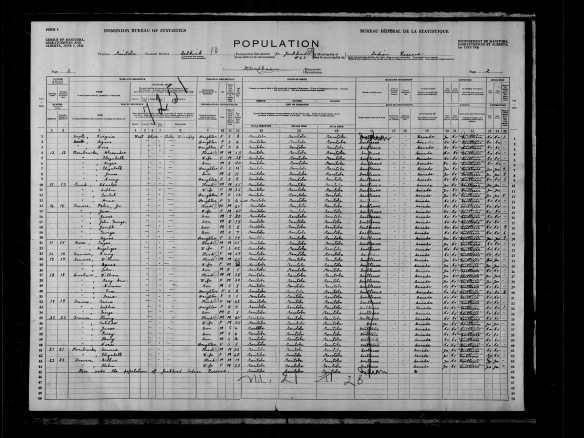 A page for Jackhead Indian Reserve, Manitoba, from the 1926 census of Manitoba, Saskatchewan and Alberta (e011226423)

Racial or tribal origin is a column on the census chart that most genealogists find extremely helpful. While this information gives researchers valuable insight into where their ancestors originated, one needs to consider the enumerator instructions for deciphering the answer to this question. According to the publication, “The racial or tribal origin is usually traced through the Father, as in English, Scotch, Irish, Welsh, German, Italian, Danish, Swedish, Norwegian, Bohemian, Ruthenian, Bukovinian, Galacian, Bulgarian, Chinese, Japanese, Polish, Jewish, etc. A person whose father is English but whose mother is Scotch, Irish, French or any other race will be considered in this connection as English, and so with any of the others.”
This line of thought did not hold true for Indigenous families. The instructions state “in the case of Indians, the origin is traced through the mother, and names of their tribes should be given, as ‘Chippewa,’ ‘Cree,’ etc.”

Column 17 – Year of immigration to Canada 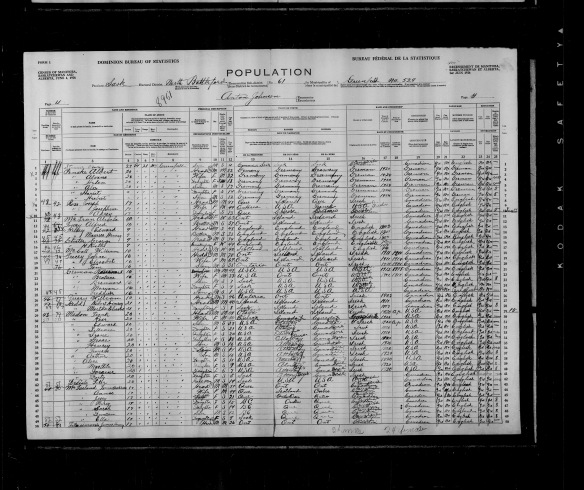 A page for North Battleford, Saskatchewan, from the 1926 census of Manitoba, Saskatchewan and Alberta (e011242806) Note the entry for Frank Madon and his wife, who appear to have been born in Canada, immigrated to the United States where they were naturalized, and then returned to Canada as immigrants in 1920.

A researcher might be surprised to see an immigration year for a Canadian-born ancestor. The reason for that notation may be that, according to enumerator instructions, column 17 “applies to all persons, irrespective of age or sex, who were born outside of Canada, and also to Canadian-born persons who had formerly become domiciled in a foreign country but have returned to their native soil.” The publication clarifies further “for those of Canadian birth, the year of their returning home to remain permanently should be given.” 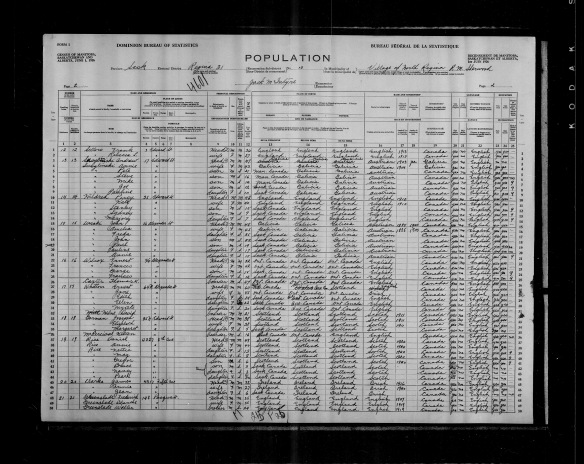 A page for Regina, Saskatchewan, from the 1926 census of Manitoba, Saskatchewan and Alberta. Note the notation of “pa” in column 18 for Andrew Susylinski (e011245054)

The enumerator instructions state that a notation of “pa” in column 18 indicates that the “person has applied for papers but has not yet reached the full status of citizenship.” A notation of “pa” would signal to the researcher that more information about their ancestor may be found in naturalization records.

If you are curious about finding your ancestors in other census years, feel free to explore Library and Archives Canada’s Census page.

Sara Chatfield is a project manager in the Exhibitions and Online Content division at Library and Archives Canada.