“In August, 1896, the world-startling discovery of the Klondike was made.” So wrote William Ogilvie in his memoir Early Days on the Yukon & the Story of its Gold Finds. Prior to becoming the second Commissioner of the Yukon Territory in 1898, Ogilvie was a noted Dominion land surveyor working in western and northern Canada. In 1895, Ogilvie was commissioned to make all the required surveys for town sites, mining claims and mineral deposits in Yukon. He previously surveyed the Yukon River in 1887–88 and determined the approximate location of the 141st meridian—the current boundary between Alaska and the Canadian territories.

In 2015, the Surveyor General’s Branch of Natural Resources Canada (NRCan) approached Library and Archives Canada (LAC) regarding the potential transfer of approximately 80,000 records from the Canada Lands Survey Records (CLSR) collection, a total of 1.5 km of archival holdings. In early 2017, LAC completed the transfer of this major acquisition to its permanent holdings.

The collection consists of the official textual surveys and their associated documentation of Canada Lands (First Nations Reserves, National Parks lands, Crown lands, and territorial lands) since 1769. It includes the original maps, survey files, survey plans and field books that Ogilvie created of the Klondike Gold Rush, marking the discovery of gold at the Klondike goldfields of Bonanza Creek and Eldorado Creek.

The 80,000 records are being processed, described, arranged, and made available to the public via online finding aids, exhibitions, and in concert with NRCan’s online database. At the same time, this acquisition complements LAC’s existing collection of 1,034 official survey plans of Indian reserves and Indian school lands across Canada, transferred from the Legal Services Division of the former NRCan in 1959. LAC is digitizing these earlier official surveys of Indian reserves and Indian school lands, reaffirming its commitment to making historical records available online.

The CLSR collection tells countless stories—one of the more significant ones involves the mapping of the claims discovered in the Klondike Gold Rush and the role of Indigenous players in this endeavour.

The map, Plan of Placer Mining Claims on Part of Bonanza Creek in the Klondike Mining Division of the Yukon Territory (below) was plotted in Ogilvie’s surveying field books. It documents the discovery claims made by Jim (Kèsh) Mason (also known as “Skookum” Jim, meaning strong, and identified as “Tagish Jim” on the map), a member of the Tagish Khwáan First Nation (Image below), his American brother-in-law George Carmack, and his sister Shaaw Tláa, also known as Kate Carmack. These three are credited with discovering gold in Bonanza Creek, an event that triggered the Klondike Gold Rush. This survey map and accompanying field book reflect the important roles that Ogilvie, George and Kate Carmack, and Mason played in the Gold Rush. These records are even more remarkable considering that at the time it was unusual for discovery claims made by First Nations prospectors to be accepted by mining authorities.

Through these records, Ogilvie put Indigenous prospectors like “Skookum” Jim Mason on the front page of history. Mason also figured prominently in Ogilvie’s memoir, with the chapter “Discovery of the Klondike” including a section dedicated solely to him. Mason was described as Ogilvie’s “old friend”. Ogilvie even used the sobriquet “Tagish Jim” in his field books and on his survey maps. He also spoke of how he “employed Jim in various capacities, and always found him reliable, truthful, and competent to do any work I gave him. Afterwards, while working on his claim on Bonanza, I had more experience with him, and it only corroborated the opinion I have expressed of his character.”

These underused archival records assist in documenting aspects of Canada’s Indigenous history and culture such as the distribution of language groups, treaty rights, the location of residential schools and Indian reserves, and Indigenous land use and occupation. Through these, we can see the history and evolution of Indian reserves, National Parks, military bases, railway development, the fur trade, the Arctic, as well as defining events such as Ogilvie’s “world-startling” Klondike Gold Rush. 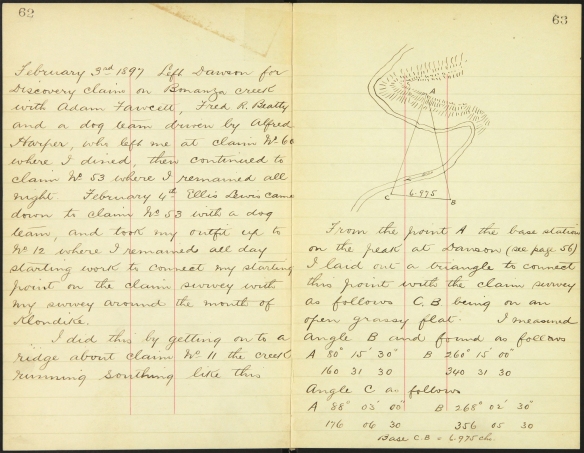 Roddy McFall is a senior archivist in the Finance, Industry, Law, Environment, and Science Section of the Government Archives Division at Library and Archives Canada.