In this next article on examining these sketchbooks closely, we are looking at paper stains and losses. In this context, a stain is a discoloration of the paper fibre, while a loss is when an area of the paper is physically detached or missing.

Envision W.R. Stark tucking a sketchbook in his army bag or coat pocket in all kinds of weather or situations. As Stark was not an official war artist, he likely sketched in his spare time or when he was on leave. Through his sketchbooks we can follow him on a visit to the London Zoo, a stroll in the countryside or along the seacoast. His images typically depict daily life, people and landscapes.

These sketchbooks show many signs of physical deterioration because of Stark’s handling and shuffling of them during his war service, as well as the intervening 75 years between the end of the war and their acquisition. As you can imagine, being out on the front in terrible living conditions, water damage would be an important factor. Water not only warps the paper, but it can also leave a tideline. This happens when a liquid deposits dissolved materials such as dust, colouring matter and the like at the edge of the liquid, leaving behind a discrete line when the paper dries that is often darker than the remainder of the stain.

Tidelines found on two or more sequential pages are one of the many visual indicators used to determine the original order of the sketchbook pages.

Detail of a tideline water stain with a darker perimeter along the spine.

Some oily or greasy marks and ink drops are also noted along the edges of the pages. These marks are often seen in an offset pattern that repeats itself from one leaf to the next in a decreasing or increasing fashion. These are also great clues for repositioning out-of-order leaves within a sketchbook.

Oily stain found along the edges of multiple pages. 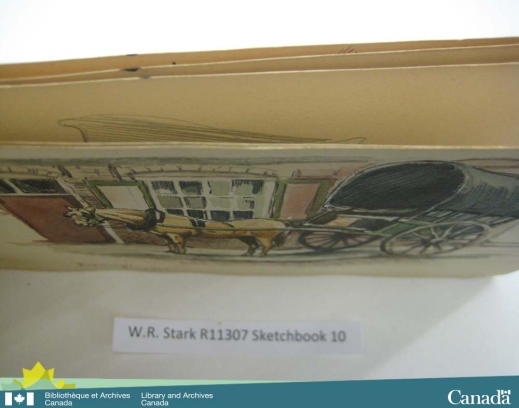 Ink stains showing the repeating pattern along the edges.

Other visual indicators that are helpful in this detective work are a repetitive pattern of paper loss along an edge. For example, several pages have been torn or indented in the same area.

An example of a repetitive pattern of paper loss along the edges of the sketchbook pages.

Visit our Flickr album on the conservation of the sketchbooks to see more photographs of this detective work. You can also view the previous articles in the Conservation series on the blog, Facebook and Twitter.