Canadian War Artists brings together the portraits of eighteen Canadian war artists who painted during the Second World War. These portraits, from the collections of Library and Archives Canada are accompanied by short biographies.

In the last article on William Redver Stark, we discovered that the 14 sketchbooks show signs of structural and physical damage. We also noted that all of the sketchbooks had some pages missing and five sketchbooks had numerous pages missing. It is impossible to determine if Stark removed the pages himself or whether they were removed by someone else at a later date. Nonetheless, removing pages resulted in a series of negative outcomes for the sketchbooks:

The sequence of two single pages was discovered by a thin line of watercolour pigments on the edge of the left page which matches the right page.

To begin to remedy these issues, the conservation team examined each sketchbook page by page to determine the original orientation and order of pages. This was accomplished by looking at all the little details—the media, watercolour, ink or graphite, the bindings and every instance of damage to the pages—and mapping them out very carefully. The team used various light sources, angling the light to view physical details of the paper, a microscope for magnifying every minute detail and the precise measurement of each page.

Media transfer—this page was turned when the watercolour was still wet, transferring green and brown watercolour onto the facing page. The loose page is returned to sequence.

The most conclusive evidence for the original order of the pages was:

The graphite lion on the left is mirrored in a media transfer onto the right page confirming the sequence of these two loose pages.

Evidence that matched up two or more pages in a certain sequence was documented and the long process of revising the page order began. Each detail was catalogued in a template which really helped to develop an understanding of the sequence for each sketchbook.

The page mapping template describes the contemporary sequence and the most likely original collation of the sketchbook. The documentation includes details of the number of pages per signature (grouping of sheets folded and stitched together); the number and location of missing, repositioned and blank pages; pagination; and paper type. Artist’s inscriptions are recorded as well.

The first page mapping chart shows examples of media transfer and overlap. Media overlap would have occurred when Stark was actually sketching or painting as the media was applied beyond the intended area or page. Media transfer happened after sketching or painting when the sketchbook was closed and pages were in direct contact with either wet or friable (crumbly) pigments. In both cases, media was visible on the preceding or subsequent pages and provided evidence of the original order.

In the next part, we continue to explore page mapping by looking at damaged pages.

Over the next few months, the blog will feature a series of articles to uncover behind-the-scenes conservation work. This work ensures that the Library and Archives Canada collection is maintained, preserved and available for future generations to enjoy. We will be following along as the conservation team conserves the William Redver Stark sketchbooks. We had a preliminary overview of the restoration of the sketchbooks this year as well as a podcast about William Redver Stark. Now over the next months, the team will be conserving the sketchbooks and documenting the conservation process on the blog, Facebook and Twitter.

Examining the sketchbooks: the groundwork

The paper in the 14 sketchbooks is either wove watercolour or wove drawing paper. Wove paper is paper made on a closely woven wire roller or mold and having a faint mesh pattern. Unsurprisingly, the eight sketchbooks with drawing paper do not have watermarks. Watermarks are a design or symbol, such as the maker’s name, that is impressed on a piece of paper and can be seen when the paper is held up to the light. Three of the six watercolour paper sketchbooks have watermarks from different English papermakers.

Watermark reading “1915 England” on one of the sketchbooks.

The dimensions of the sketchbooks range from 84 x 126 mm to 145 x 240 mm which makes them roughly the size of a smart phone or a deck of cards. There is no pagination in any of the sketchbooks but a close examination reveals the sequence in which the artist used the sketchbooks—some were used from front to back, some back to front or in a completely random order.

Three sketchbooks laid out beside a smart phone for size comparison.

Further examination reveals other important nuggets of information. Some of the books have bookseller tickets, artists’ colourmen labels or ink stamps. These can provide further information on the composition of the paper, the format and provenance of the book. Some labels indicate the number of pages which is very useful in determining if pages are missing. The examination concluded that many pages were missing from these sketchbooks. The provenance information also reveals that the books came from a variety of book makers and booksellers in London and France and that some were marketed to English, French and German consumers. 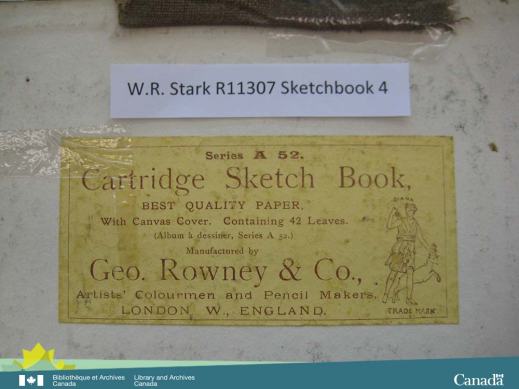 An example of an artists’ colourmen label showing the maker, the provenance of the sketchbook, the number of pages and quality of the paper.

The text blocks (the main book body) are composed of signatures of between four to eight folios. A signature is a group of folios. A folio is a single page, folded once. All but two of the sketchbooks were traditionally bound, one with two metal spine rings and another with a stapled binding. These two simple binding structures were hand produced and do not use the commercial industrial manufacturing commonly used in book production at the time. All the sketchbooks have hard board covers. The bindings are plain and utilitarian with no decoration on the covers or spines except for manuscript notations in ink or graphite possibly written by the artist. Two sketchbooks have leather spines with cloth on the boards. The others have beige canvas bindings with an elastic-wrap closure. Most of the sketchbooks have pencil holders.

The sketchbooks have not been previously repaired or conserved and all exhibit multiple minor or major stability issues as follows:

The next article in the series, “The William Redver Stark sketchbooks: page mapping,” will look at how the conservation team determined the order of the pages in the sketchbooks.

Visit Flickr to view more images of the conservation examination.