Terrance Stanley Fox was born on July 28, 1958, in Winnipeg, Manitoba. The family would eventually settle in Port Coquitlam, B.C., in 1968. As he was growing up, his family and friends described him as competitive and driven, someone who displayed a passion for sports and who excelled at both long-distance running and basketball. Little did they know he would go on to become a Canadian hero who would leave the world a better place than he found it.

In 1977, at the age of 18, Terry Fox was diagnosed with osteogenic sarcoma, a form of bone cancer, in his right leg. Tragically, this would result in amputation just above the knee. He went on to endure sixteen months of chemotherapy. During those grueling months, he was deeply affected by all the suffering and hardship he experienced and also witnessed in the others around him in the hospital receiving treatment for his horrible disease. At the time, cancer research was still in its infancy, and he knew there was much to be done for those affected by cancer. This led him to come up with the idea to run from coast to coast in what he coined the Marathon of Hope. His goal was to help inform Canadians of the battle cancer patients faced and to raise money for a cure. 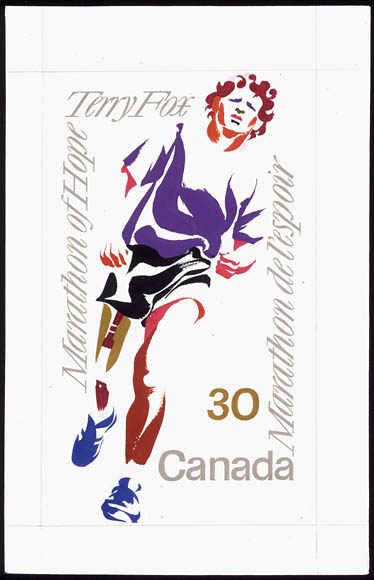 On April 12, 1980, Terry Fox dipped his prosthetic leg in the Atlantic Ocean and officially began the Marathon of Hope. The idea came to him after reading about Dick Traum, an amputee who had run the New York City Marathon. This gave Fox, a dedicated athlete, the idea to run across Canada to raise awareness and funds for cancer research.

What happened over the course of the next 143 days was truly inspirational. At the onset, there was little media attention, but that had changed by the time he reached Ontario. By then, the Canadian Cancer Society, Ontario Division, had caught wind, as had the media and some prominent journalists. Events were held across the province, and saw Fox meeting with Prime Minister Pierre Trudeau and a host of celebrities. With fierce determination, and averaging 42 kilometres a day, he united and captivated Canadians in a way that had not been seen before and has not been seen since. On September 1, 1980, with the cancer having spread to his lungs, he was forced to end his cross-country journey after completing a remarkable 5,373 kilometres, from St. John’s, Newfoundland and Labrador, to Thunder Bay, Ontario.

Despite not being able to keep running, on February 1, 1981, Terry Fox realized his goal of raising $1 for every Canadian. On June 28, 1981, after a long and courageous battle, Terry Fox passed away. His legacy is enshrined in the hearts and minds of Canadians. The Marathon of Hope so touched Canadians that many wrote to the federal government speaking of how connected they felt to Fox and asking that the government find ways to keep his memory alive.

His legacy lives on with Canadians today. Since 1980, the annual Terry Fox Run, organized by the Terry Fox Foundation, has raised more than $850 million dollars. It has made an incalculable difference in cancer research in Canada and has given hope to millions affected by the disease. Over the years, Terry Fox’s impact has reached well beyond Canada. It has grown to include millions of participants in more than 60 countries. It is the world’s largest one-day fundraising event for cancer research.

A postal cover of Terry Fox receiving the Companion of the Order of Canada medal, issued by Canada Post in April 1982. (e001218739) Copyright: Canada Post Corporation

Fox is remembered as a Canadian hero for his efforts. For his dedication to the cause and his bringing together of Canadians, he was named a Companion of the Order of Canada in 1980, the youngest person ever to receive this honour. Also in 1980, he received the Lou Marsh Award as Canada’s top athlete. In both 1980 and 1981, the Canadian Press named him Canadian Newsmaker of the Year. His legacy is honoured all across Canada by way of monuments, statues and sculptures, as well as buildings, roads and parks named in his honour.

Kelly Anne Griffin is an Archival Assistant with Specialized Media and Description in the Government Archives Division at Library and Archives Canada.

In 1948, Norman Kwong stepped onto the field with the Calgary Stampeders of the Canadian Football League (CFL) for the first time. The 18-year-old rookie, and eventual Hall of Famer, was the league’s first Chinese-Canadian player. 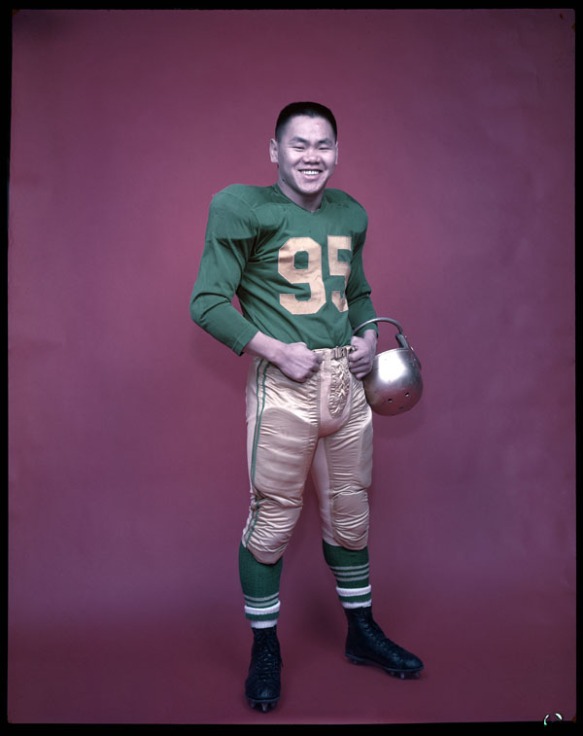 Norman (born Lim Kwong Yew) was born in Calgary in 1929, the fifth of six children. His parents, Charles Lim and Lily Lee, operated a grocery store. They had immigrated to Canada from Guangdong, China, several years before Norman was born. His obituary in the Edmonton Journal stated that in the 1920s, there were fewer than 5,000 Chinese Canadians in Alberta. The vast majority were men, in large part because the racist and discriminatory “head tax” kept most men from bringing their wives and children to Canada. Norman’s mother was one of only five married Chinese women in Calgary. In 1923, the government passed the Chinese Immigration Act (commonly known as the “Chinese Exclusion Act”), effectively ending immigration from China. In 1947, the year before Norman began his professional football career, the Act was lifted, and Chinese Canadians gained the right to vote.

His Edmonton Journal obituary quotes him as saying, “Sports is life, only it’s distilled into a shorter time. It’s clear-cut. Everything’s out in the open. There’s no way to hide. There’s always a winner and a loser. And I guess that appeals to my competitive nature. Of course, I always want to be the winner.”

Norman retired at the age of 30. He married Mary Lee and entered post-football life, working primarily in commercial real estate. In the 1980s, he returned to sports as an executive with the Calgary Stampeders and was part of the original ownership group of the Calgary Flames of the National Hockey League. When the Flames won the Stanley Cup in 1989, he became one of only five people to have won both the Grey Cup and the Stanley Cup as a player, manager or executive.

Coat of Arms of Norman Lim Kwong, courtesy of the Canadian Heraldic Authority (Office of the Secretary to the Governor General). The green and gold are the Edmonton team colours, and the horizontal stripes represent the 10-yard lines from a football field. The horse represents his first team, Calgary. The rose represents his wife, Mary, an avid gardener. The dragons represent his Chinese heritage, and the dragons’ hindquarters are representative of the Albertosaurus dinosaur.

Norman Kwong was the National Chair of the Canadian Consultative Council on Multiculturalism (1979–80) and Honorary Chair of the Easter Seals Campaign in Calgary (1982–84). He was named to the Order of Canada (1988) and later served as the Lieutenant Governor of Alberta (2005–10). The Calgary Flames named a bursary for medical students in his honour. He died in Calgary in 2016.

Dalton Campbell is an archivist in the Science, Environment and Economy Section of the Private Archives Division.