A patent of invention application (for a patent) is a document that usually includes “an abstract, a specification, and drawings.” This type of application is important as it often becomes the official patent document once it is approved. Like the patent process itself, the structure of and type of information in each application is highly regulated. Here’s an overview of what Library and Archives Canada (LAC) holds in terms of patent applications. A subsequent blog post will detail the steps to follow when searching for a specific application.

The Canadian Intellectual Property Office fonds is one of the first places to look if you’re trying to get an idea of what LAC holds in terms of patents. You’ll find relevant holdings in the Patent Branch and the Industrial Design Division series within that fonds. Both series encompass the pre- and post-Confederation periods and include documentation that demonstrates the various stages of the patent application process. Please note that many of these are searchable through the Canadian Patents, 1869–1919 database. END_OF_DOCUMENT_TOKEN_TO_BE_REPLACED

In 1911, Frank and Lester Patrick, hockey players and entrepreneurs, built the first two artificial ice rinks in Canada—the Denman Arena in Vancouver, and the Victoria Arena in Victoria. The Denman Arena was the largest arena in Canada at the time with a seating capacity of 10,500. The rinks were constructed to be the main rinks for the new Pacific Coast Hockey Association games, created by the Patrick brothers to bring professional hockey to western Canada and to compete with the National Hockey Association (predecessor to the National Hockey League).

According to Library and Archives Canada’s database Canadian Patents, 1869-1919, Frank Patrick applied to the Canadian Patent Branch to patent the refrigeration system for their rinks in 1913. The patent seems to have been granted in June 1914, although the application does have “cancelled” stamped on it. 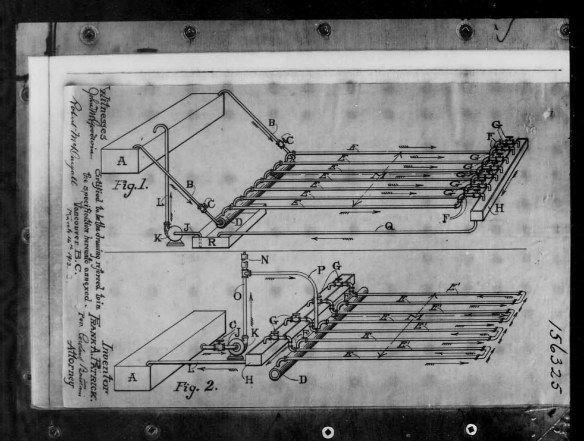 Recognized as the leaders in the development of artificial ice hockey rinks in Canada, Frank and Lester Patrick are also credited for implementing many rules of hockey that are instrumental to how the game is played today.

For more information on the opening of the Denman Arena and the creation of the Pacific Coast Hockey Association, please see our virtual exhibition, Backcheck: a Hockey Retrospective.

The creation and evolution of the hockey net

The first hockey goals consisted of two rocks, and later posts, which were placed at each end of the rink. The goal posts were first eight feet apart, then reduced to the 6-foot width still used today. 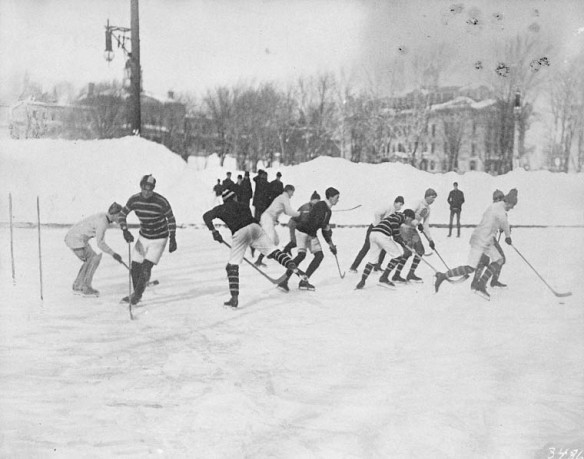 In the 1890s, a number of hockey leagues started to experiment with the use of fishing nets attached to the posts to avoid arguments over goals. In 1899, the newly-created Canadian Amateur Hockey League officially adopted the use of hockey nets during their games. The goal consisted of a net attached to a rope connecting the top of each goal post.

Minutes of the annual meeting of the Canadian Amateur Hockey League, December 9, 1899 (MIKAN 100095 or on the Héritage website, image 95).

In 1911, Percy LeSueur, one of the best and most innovative goaltenders at the time, submitted a patent application to improve the hockey net. According to his application, the objective of his patent claim was to “enable much greater accuracy in deciding scores to be maintained.” LeSueur’s proposed hockey net improved on the existing goal type where the supporting top bar was set back a number of inches from the goal line and allowed a shot from close range and at an upward angle to go over the bar, even if it crossed the goal line. The patent was granted to Le Sueur in 1912 and the concept behind his patent remains the foundation for the hockey goal still used today.

In November 1959, the all-time great goaltender, Jacques Plante, would change the hockey world by starting to wear a face mask on a regular basis. Until then, goaltenders did not use protective masks. A few notable exceptions included Elizabeth Graham who used a fencing mask in a hockey game in 1927 and National Hockey League (NHL) goaltender Clint Benedict who used a leather mask in a few games in 1929. Plante of the Montreal Canadiens had experimented since the mid-1950s with different masks in practices and exhibition games to protect himself from pucks and sticks.

Jacques Plante showing off a mask, the “Louch Shield” which he experimented with in practice before 1959 (MIKAN 4814213)

On November 1st, 1959, after suffering a broken nose and cuts to the face during an NHL game against the New York Rangers, he returned from the dressing room with a mask created by fibreglass specialist, Bill Burchmore. 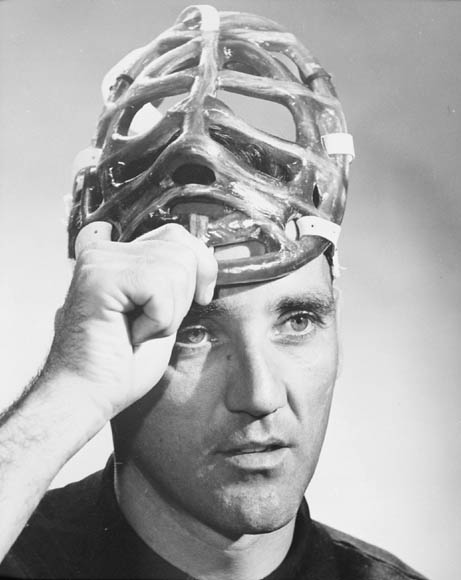 Other goaltenders would follow suit and the mask soon became a standard piece of equipment for a goaltender. Jacques Plante would continue improving goalie masks and created his own mask-making business towards the end of his hockey playing career.

For more information on Jacques Plante and his innovations, consult the Jacques and Caroline Raymonde Plante fonds held at Library and Archives Canada.