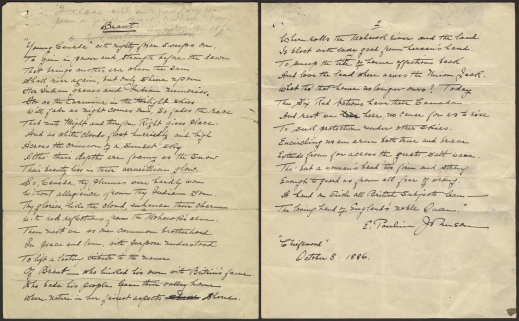 This poet’s mixed Mohawk-British heritage helped shape her vision for Canada’s future. She writes that Indigenous and British-Canadians should form a “brotherhood.” And all should be loyal servants—together—of the British Empire.

As a child, I was an obsessive reader—my friends called me a “reader-bug” because I always had my nose in a book. Perhaps that’s why I became an English professor—so that I could read as much as I wanted, and encourage others to do the same. I think that it is especially important to read works by Canadian writers, who help us to understand our history and who we are today. 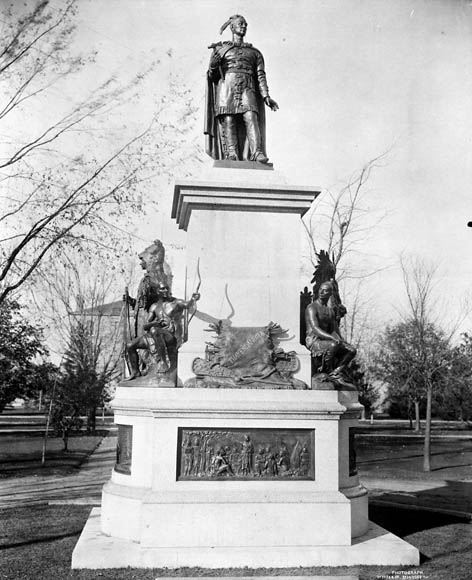 “Brant” was one of Pauline Johnson’s first published poems. She composed it for the unveiling of a statue of the Mohawk leader, Joseph Brant, in the town of Brantford on October 8, 1886, and it was included in a souvenir brochure prepared for the occasion. During Johnson’s lifetime, fans of literature often collected autographs from their favourite writers. Regarded as one of Canada’s most important poets, Johnson not only signed many copies of her books for her admirers, but also frequently wrote out her poems in longhand for them to keep.

An interview with Pauline Johnson by Canadian journalist Garth Grafton (Sarah Jeannette Duncan) about Johnson’s work, her family, and the unveiling of the Brant Memorial, in Woman’s World, October 14, 1886. (AMICUS 8086919)

LAC holds a large collection of letters that L.M. Montgomery (author of Anne of Green Gables) wrote to her friend, George Boyd Macmillan, a pen pal who lived in Scotland. This correspondence lasted for many years, from 1903 to 1941. Montgomery’s letters are very long and newsy, discussing everything from the books that she read and the places she visited, to the doings of her family and her beloved cats. Over the years, the tone changes from youthful optimism to sad disappointment as she lives through the First World War and the Great Depression, giving us an inner view of the Canadian experience during a tumultuous time. Montgomery’s distinctive handwriting is less stylish than Johnson’s elegant script, perhaps reflecting her early years as teacher, when she needed to show children how to form their letters.

A page from a letter (page 757) from Lucy Maud Montgomery to George Boyd Macmillan, a Scottish writer, dated April 7, 1904 discussing her love of historical books and fairies as a child (MIKAN 120237) 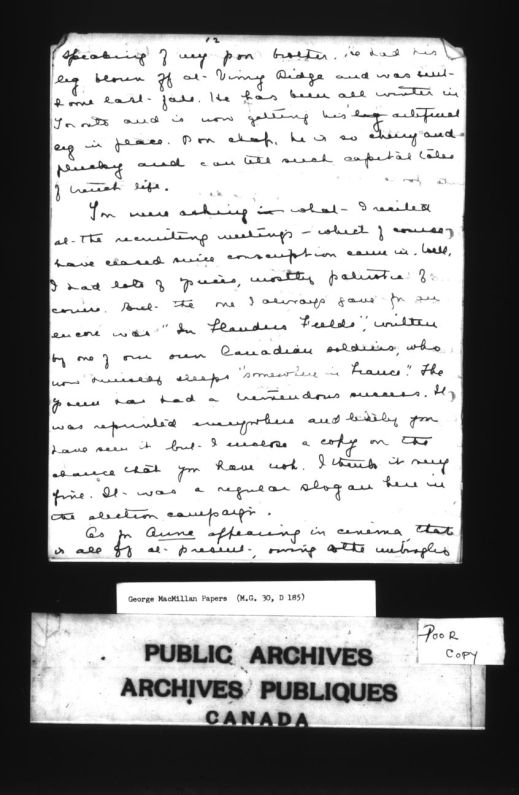 A page of a letter (25) from Lucy Maud Montgomery to George Boyd Macmillan, April 7, 1917 which discusses the popularity of “In Flanders Fields” and its use in election campaigns. (MIKAN 120237)

Carole Gerson is a professor in the Department of English at Simon Fraser University. Co-editor of Volume 3 (1918–1980) of History of the Book in Canada / Histoire du livre et de l’imprimé au Canada, she has published extensively on Canada’s literary and cultural history with a focus on women writers, including L.M. Montgomery and Pauline Johnson. Her book, Canadian Women in Print, 1750–1918 (2010), won the Gabrielle Roy Prize for Canadian criticism. In 2013 she received the Marie Tremaine Medal from the Bibliographical Society of Canada.