Plan for a group of eight farms by Sir William Cornelius Van Horne for the Canadian Pacific Railway, ca. 1889

Plan for a group of eight farms by Sir William Cornelius Van Horne for the Canadian Pacific Railway, ca. 1889 (MIKAN 2925396)

This doodled design hints at the power railroad companies held to influence the look of the country. Settlements along Canada’s railway lines still reflect the grid plans imposed on them back then.

During four very happy summers as an archival assistant at the Provincial Archives of Alberta, I worked with government records, private manuscripts and cartographic records, and I answered many reference inquiries for homestead applications (through which homesteaders obtained letters patent to confirm that they had settled former Crown land and had received legal title). During my last summer, I catalogued the series of historical township plans (maps) that covered all of Alberta. 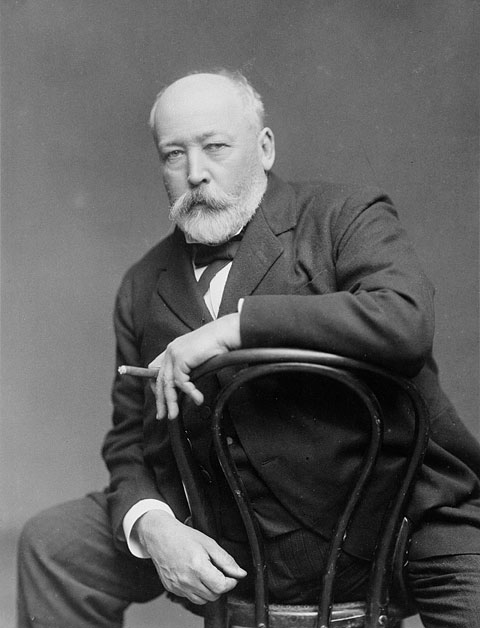 Since I am well acquainted with the Western Canadian land survey system and the homestead applications and township plans at the Provincial Archives of Alberta, this item from the Sir William Cornelius Van Horne fonds resonated with me. Those grid lines looked very familiar! But the Canadian Pacific Railway’s (CPR) influence on the look of Western Canada extends beyond this doodled sketch of a grid-based settlement plan; there is more to the story.

The CPR’s construction was supported by the government through the Canadian Pacific Railway Charter, which bestowed on the company a monetary subsidy of $25 million and land grants of 25 million acres (an area roughly the size of England), in addition to lands for rights-of-way, stations and yard works. Van Horne had direct responsibility for the CPR’s construction between 1882 and 1885, and was subsequently its Vice President, President and Chairman. Soon after the railway was completed in 1885, he and the other directors of the company realized that whatever small profits were made would be almost immediately swallowed up by the operating and maintenance costs of the difficult mountain sections.

Recognizing not only the potential lure of new settlement lands but also the grandeur of mountain scenery, Van Horne and the CPR used artwork and carefully crafted words in advertising campaigns that targeted settlement and tourism in Canada. The CPR’s influence and actions thus helped to shape Canada’s image abroad and contributed directly to the national economy.

Van Horne is famously quoted as saying, “If we can’t export the scenery, we’ll import the tourists.” Both his passion for art and his business acumen gave him a keen interest in the development of the CPR’s tourism campaign.

While there is a plethora of beautiful visual records at LAC and across Canada that could show how the CPR and Van Horne influenced the image of Canada abroad, I will focus instead on the complementary power of words, specifically those found in the 1891 version of the CPR tourist pamphlet The Canadian Pacific: The New Highway to the Orient Across the Mountains, Prairies and Rivers of Canada. 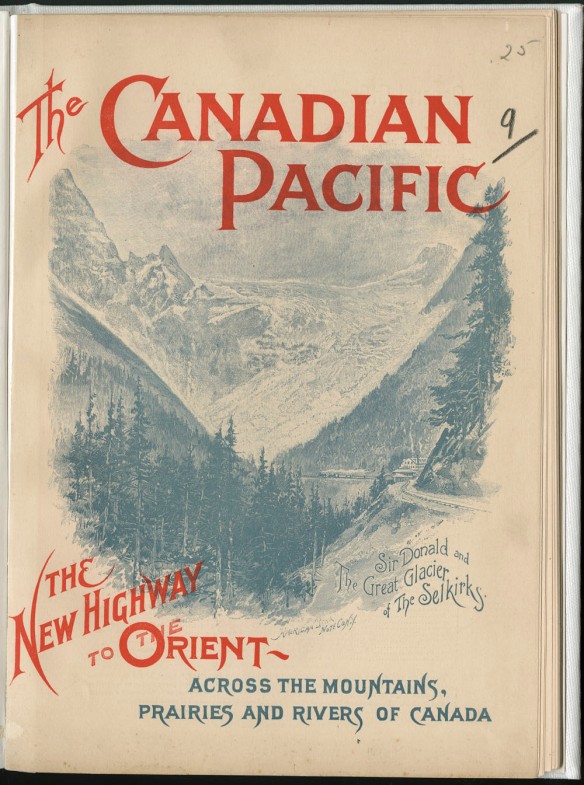 Conceived and written by Van Horne himself, the 48-page pamphlet was originally begun in 1884 before the CPR was even completed, but it was not produced until 1887 because Van Horne insisted on having nothing but the best mountain illustrations to complement the text. He was one of the patrons behind the “Railway School” of Canadian artists that included John Arthur Fraser, Thomas Mower Martin, Frederic Marlett Bell-Smith and Lucius O’Brien. The artists were given free rail passes, with the only stipulation often being that the CPR would have first choice of the finished works for its own use.

Notwithstanding Van Horne’s passion for art, as a businessman he was not above clearly reminding artists that they owed it to the CPR to portray the mountains in a suitably grand manner to entice visitors. In one notable circumstance, described in E.J. Hart’s book The Selling of Canada: The CPR and the Beginnings of Canadian Tourism (AMICUS 3976336), Van Horne wrote to John Arthur Fraser (who had been sent out in 1886 to sketch the entire CPR line):

The black and white sketches will hardly answer our purposes, the mountains not being sufficiently imposing. I made last night a rough sketch … which will illustrate my ideas; it is made mostly from memory and I have taken a great deal of license but I do not think that any one going to the spot without the picture in hand will ever accuse us of exaggeration. For the great glacier and Syndicate Peak I would like something similar to this. … I find the perspective in the glacier not right and the peaks projecting through the glacier are not treated broadly enough to give their proper distance. You will of course be able to make a great many improvements on my sketch, but I hope you will preserve the size.

Please make a sketch of Mount Stephen, treating it in something the same manner. (The Selling of Canada, p. 35)

The New Highway pamphlet itself was clearly aimed to entice tourists:

May I not tempt you, kind reader, to leave England for a few short weeks and journey with me across that broad land, the beauties and glories of which have so recently been brought within our reach? There will be no hardships to endure, no difficulties to overcome, and no dangers or annoyances whatever. You shall see mighty rivers, vast forests, boundless plains, stupendous mountains and wonders innumerable; and you shall see all in comfort, nay in luxury. If you are a jaded tourist, sick of Old World scenes and smells, you will find everything fresh and novel. … If you are a mountain climber, you shall have cliffs and peaks and glaciers worthy of your alpenstock. (New Highway, 1891, p. 8)

The language is so evocative that reading this today, we can actually imagine what it was like to travel across Canada on the CPR in the late 19th century. The story begins with an explanation of how to reach the Montréal terminus by steamship (unless it is winter, in which case Halifax is the destination), then noting: “But you are impatient to see the mountains, and if you will permit me to choose, dear reader, we will start from Montreal by the main line of railway, and in order that we may miss nothing we will return by the great lakes, and see Toronto and the Falls of Niagara then.” (p. 12)

The pamphlet goes on to extol the facilities of the train itself before providing a detailed description of each part of the journey to the West. The voyager is taken step by step from Montréal through the Ottawa Valley, then north of Lake Superior and into Manitoba, over the great plains of the then Northwest Territories, and into the majestic mountain ranges west of Banff, before emerging from the grand yet “terrible” Fraser Canyon into the Fraser Valley and Vancouver, and concluding with a combination of apology and exhortation:

I ask your pardon, patient reader, for my persistence in showing you all sorts of things as we came along, whether you wished to see them or not. My anxiety that you should miss nothing you might wish to see is my only excuse. You have been bored nearly to death, no doubt, and I have noticed signs of impatience which lead me to suspect your desire for freedom to go and see as you like, and as you have found that no guide is necessary, I will, with your permission, leave you here … (pp. 43–44)

In the end, the CPR’s appeal to the hearts and minds of tourists to promote and exploit the mountain scenery paid off not only for the company but also for Canada’s overseas image and the national economy, a fact that was recognized and further capitalized on by the federal government in the coming years. J.B. Harkin, the first Commissioner of Dominion Parks (1911–1936), shared Van Horne’s appreciation of the economic value of Canadian scenery, regularly including statistics in his annual reports to the Minister of the Interior. Citing the expenditures of foreign and Canadian visitors to Banff between 1910 and 1915 (approximately $15 million and $8.5 million respectively), he further praised the economic value of national park scenery:

It is unique in this regard that while it brings in large sums of money it means that the country does not give in return anything which represents a loss to the country. When wheat is sold we sell a portion of the fertility of our soil. But the tourist who pays his money to see our mountains and lakes and falls, our canyons and glaciers, not only leaves his money but also leaves whole and unimpaired all those natural attractions which brought him here. These beauties remain forever to attract more tourists and more tourist dollars.”

Want to learn more about the foundations of the Canadian tourist industry and the impact of Canadian railways? Take a look at the archived LAC web exhibition Canada, by Train.

Catherine Bailey is a senior government records archivist at LAC, where she has been responsible for the health and social welfare, transportation, justice and security portfolios. While working on her Honours BA in Canadian History (UBC, 1986), she spent summers working as an archival assistant at the Provincial Archives of Alberta, before moving on to complete her Master of Archival Studies degree (UBC, 1988). General Editor of the Association of Canadian Archivists’ journal Archivaria from 2007–2008, she received the ACA Member Recognition Award (2004) and the Archives Association of Ontario’s James J. Talman Award (2012). She has written and presented widely on archival appraisal, especially the development of macroappraisal within the Canadian federal government.