The photographs are part of the “WorkSpace Canada” collection, a long-term project that still is a work in progress. The project’s goal is a general description of the world of work in Canada in the early 21st century; a kind of visual inventory centred around the human aspect of labour, work and action. The idea for this photographic documentary was triggered in 2005 when I read Hannah Arendt’s book “The Human Condition.” 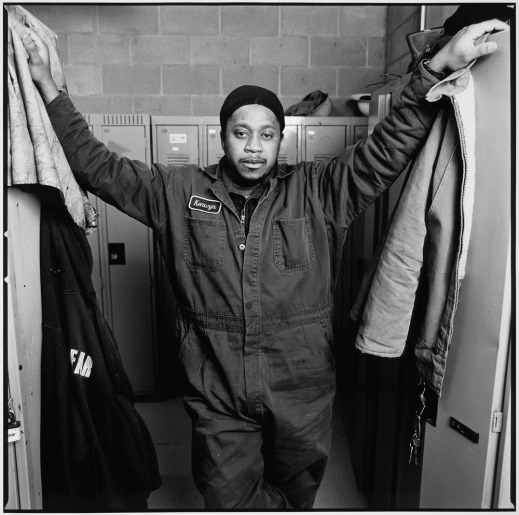 I wanted to introduce Kenwyn Bertrand, a worker at a car shredder yard in Hamilton, Ontario, with a threefold approach: giving the viewer a notion of the work environment and the activity happening there, as well as showing a facet of his individual personality. This pattern is the general approach for the “WorkSpace Canada” series.

When I came to the car shredder yard I had a kind of production schedule already in mind. From previous visits and observations I knew the so-called picking shacks were one part of the operation, and I knew they were a must in the overall description of the place. I wanted to visually translate what it was like being on shift there. Kenwyn and I discussed what would be important for me to photograph and what wouldn’t. For Kenwyn, being at his workplace meant this repeated waiting for the copper parts among the rubbish on the conveyor belt—the whole reason his job existed. Then there was the locker room, the place where every shift began and ended. And the only possible place for a portrait. Although for privacy we had to wait until every worker from Kenwyn’s shift had left.

I think—I hope—the intensity of my dealing with the subject can be seen. I try to establish an intense relationship with every person I photograph. Time is the crucial precondition for that. Time is the luxury I insist on having with my documentary work. If the viewer can read the intensity in my photographs and see it as typical for a Martin Weinhold photograph—that would make me very happy.