The careers of painters John Colin Forbes (1846–1925) and his son Kenneth Keith Forbes (1892–1980) clearly illustrate how particular prime ministers were their muses and patrons. Between them, the two portraitists painted seven Canadian prime ministers, two governors general, five chief justices of the Supreme Court, 11 speakers of the House of Commons and 14 speakers of the Senate. These artists also painted a king and queen of England on behalf of the Canadian government. Over a period of more than 90 years, the Forbeses helped to build an artistic and visual heritage depicting the executive, legislative and judicial branches of the Canadian government.

John Colin Forbes was born in Toronto in 1846. In the 1860s, he studied painting in Paris and London before returning to Canada. He was a founding member of the Ontario Society of Artists (1872) and the Royal Canadian Academy of Arts (1880).

The artist had a special relationship with Sir Wilfrid Laurier, who called Forbes a “friend.” He painted Laurier for the first time in 1885, based on a photo taken around 1882 by William Topley’s studio in Ottawa. 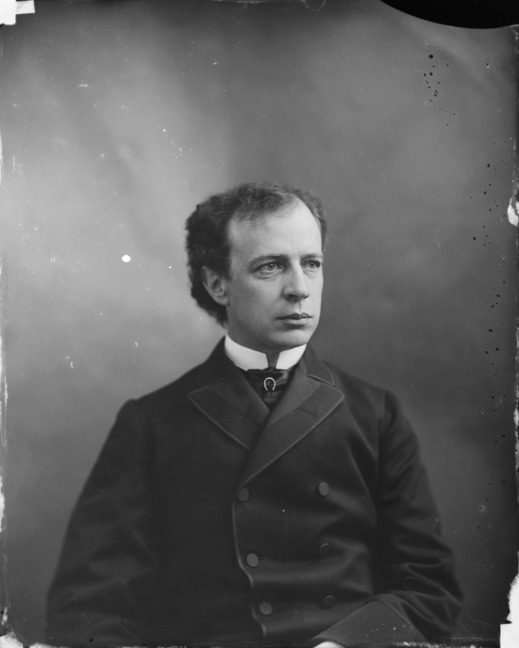 The second painting of Laurier by Forbes was presented to the Prime Minister by his friends and Liberal Party supporters on May 15, 1902. In his speech to the House of Commons, Laurier stated, “It is with a very sincere heart indeed that both in my own name and in the name of my wife, I accept from the unknown friends […] this memento which is the work of a great Canadian artist.”

Lamenting that Forbes was at the time practicing his art in the United States, Laurier added:

Unfortunately Canada, which is still a young country, has not afforded to artists all the help it might have given in the past. I trust that in the future Canadian artists and talents will receive more encouragement from the Canadian people that they received hitherto. For my part, it is with some regret, I acknowledge that perhaps the Government might have done more than it has for the encouragement of native, artistic talent.

Finally, regretting not having children to whom he could bequeath the painting, Laurier made this wish: “Someday I hope it will be in a national museum, not with a view of remembering me to posterity, but for the glory of Mr. Forbes, the artist who painted it.” A few years later, in 1906, Laurier himself gave the painting to the National Gallery of Canada.

His special relationship with Prime Minister Laurier earned Forbes his most prestigious commission: a painting of King Edward VII and Queen Alexandra. He was the first Canadian painter to have a sitting with a British monarch, and official portraits of Edward VII would adorn the House of Commons.

The correspondence between Forbes and Laurier on this matter, which is part of the Sir Wilfrid Laurier fonds at Library and Archives Canada, indicates that Forbes had requested the commission from Laurier, with whom he had previously discussed it.

Laurier agreed after he received a petition in support that was signed by 92 of the 214 members of Parliament.

Laurier forwarded the request to the Governor General, Lord Minto, who helped arrange access to the royals for Forbes.

Letter from Prime Minister Wilfrid Laurier to Governor General Lord Minto, recommending that John Colin Forbes be commissioned to do the painting, and that steps be taken to that effect with the King. (Wilfrid Laurier Fonds, MG26 G 1(A), Vol. 326, page 87632, microfilm C-813)

Two portraits of prime ministers painted by Forbes inspired their successors. In a Winnipeg Free Press article published on March 20, 1965, journalist Peter C. Newman reported that, depending on their political allegiance, new prime ministers had either Sir John A. Macdonald’s or Sir Wilfrid Laurier’s portrait installed in their East Block office in Ottawa. This practice changed under Lester B. Pearson, when the Prime Minister asked for both paintings in his office.

Photographs taken by Duncan Cameron (recently discussed in a blog post about news photographers and prime ministers) confirm that John Diefenbaker, Lester B. Pearson and Pierre Elliott Trudeau had paintings by Forbes in their offices. Paul Martin’s office was decorated with the first painting of Laurier by Forbes from 1885. 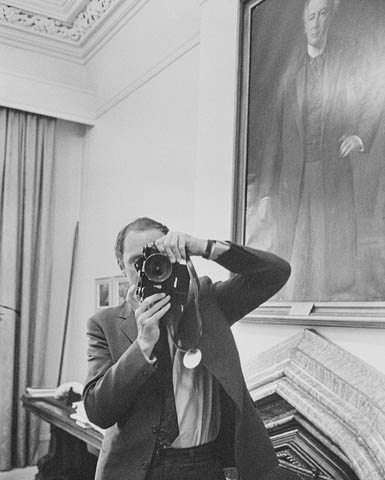 The son of John Colin Forbes, Kenneth Keith Forbes, also became a famous portraitist. Born in Toronto in 1892, he began drawing at the age of four under his father’s tutelage. Between 1908 and 1913, he studied art in England and Scotland. When the First World War started in 1914, the younger Forbes joined the British army as an ordinary soldier. He fought in France, where he was injured and gassed. Forbes was promoted to captain, and in 1918 he was transferred to the Canadian Army (specifically, the Canadian War Records Office) as a war artist. He painted scenes of battles as well as portraits of Canadian officers, including Brigadier General D. Draper.

A few years later, Forbes returned to Toronto; continuing in the family tradition, he focused mainly on portraits.

Forbes also painted the portraits of prime ministers Robert Borden, R.B. Bennett and John Diefenbaker. The first portrait of R.B. Bennett painted in 1938 by Forbes was offered to the Prime Minister by members of Parliament, senators and Conservative Party members upon his retirement from politics. It is now in the New Brunswick Museum, where Bennett bequeathed it.

Forbes then painted the official portrait of Sir Robert Borden for the House of Commons. The painting was commissioned by the Speaker of the House, Gaspard Fauteux, whose portrait Forbes had painted the previous year. The aim was to complete the collection of official portraits representing Canada’s prime ministers in the House of Commons. This painting was unveiled in Parliament on June 11, 1947, 10 years after Borden’s death, along with a portrait of William Lyon Mackenzie King, with President Harry Truman of the United States in attendance.

In his diary, Mackenzie King explains why he suggested that his portrait and that of Borden, both prime ministers in the major wars, be unveiled at the same ceremony.

A decade later, Forbes painted two portraits of John Diefenbaker. The first was given to Diefenbaker by members of his Cabinet and hung in the prime minister’s official residence at 24 Sussex Drive, and later in Stornoway, the official residence of the leader of the opposition. The second portrait of Diefenbaker was commissioned by freemasons from Washington and is now in Arlington, Virginia.

The careers of portraitists John Colin Forbes and Kenneth Keith Forbes reveal the sometimes unsuspected links between the arts and politics. The father and son clearly benefited from their good relationships with parliamentarians, particularly prime ministers, receiving many highly prestigious commissions.

Prime ministers also benefited from the work of artists like the Forbeses, whose paintings helped to commemorate and glorify the men who held the country’s highest political positions and inspired their successors. As we have seen, political affiliation was not at issue in requests to the father-and-son artists to contribute to this commemorative undertaking by painting portraits of prime ministers in office and their predecessors. The Forbes portraitists helped to establish the role of prime ministers in the country’s political memory.

Moreover, the talent for painting portraits did not end with John Colin Forbes and Kenneth Keith Forbes. The latter married Jean Mary Edgell, who was also a painter, and their daughter, Laura June McCormack (1921–1961), painted some portraits now in the Legislative Assembly of Ontario, notably one of Louis-Hippolyte La Fontaine.

Geneviève Couture is an archivist with the Prime Minister Papers project in the Science and Governance Private Archives Division at Library and Archives Canada.