One ordinary June day in 2011, an unordinary mystery landed on the desks of Library and Archives Canada’s (LAC) documentary art archivists. A small bronze statuette of James Wolfe by sculptor Vernon March had just been found at the Lord Elgin Hotel in Ottawa, carefully wrapped and secretly left unattended. The only clue was a note in which the anonymous author expressed regret at having stolen the statuette “in an act of foolishness” while visiting the Archives in the 1950s. Now in the twilight of his life, he was endeavouring to make amends…

The archivists familiar with the history of LAC’s non-textual collections immediately got to work: research was undertaken, paperwork was retrieved, and provenance was confirmed. The bronze likeness of General Wolfe had indeed been added to the Archives’ holdings in 1914! The statuette was gratefully retrieved and eventually transferred to its new current home, the Canadian Museum of History.

However, the question remains… Why would archives ever have collected that sort of sculpture in the first place? Do archives not typically stick to two-dimensional material like textual documents, photographs, maps and drawings? To be sure, even though many Canadians are aware that LAC and its predecessor institutions (the National Archives of Canada, the National Library of Canada, the Public Archives of Canada and the Dominion Archives of Canada) have acquired non-textual material for over 130 years, few are familiar with the reason why our holdings were—and, in some cases, still are—so eclectic.

The bold ambition of Sir Doughty

Simply put, the diversity of our past and present holdings is in large part owed to Canada’s second Dominion Archivist, Sir Arthur Doughty. His ambition, as he explained in the Archives’ 1925 Catalogue of Pictures, was nothing short of making the institution “… a national department of history, where are preserved sources of every kind having value for the study of the history of Canada.” This was a substantial mandate, to say the least… 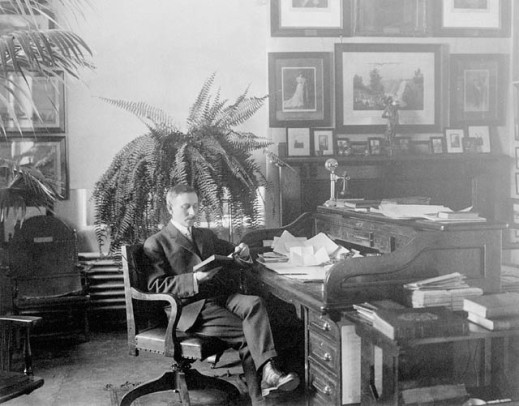 Doughty’s vision caused a considerable increase in the types of material acquired by the Archives after his appointment, in 1904. The gargantuan Duberger model of Québec, pictured below, transferred from the British War Office in 1908, is one of the most striking examples of this change in acquisition practices. 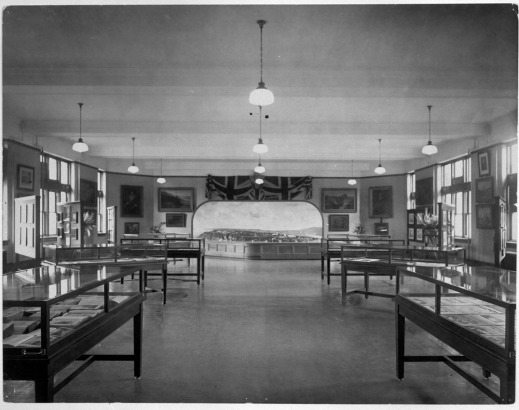 Grey Room, Public Archives of Canada, Sussex Street, after 1926. (a066642) (The model was built at Québec by draftsman Jean-Baptiste Duberger and Royal Engineer John By between 1806 and 1808. Today, the model is in the custody of Parks Canada.)

Over the years, the Archives became responsible for taking in thousands of diverse items, which included artefacts such as:

In short, nothing seemed to be off limits for the Archives, as long as it could teach Canadians something about their history.

A must-see for locals and visitors alike

Deemed “A Treasure-House for the Canadian Historian” by Saturday Night Magazine in 1910, the Archives came to develop a hugely successful museum program providing space for Canadians to immerse themselves in displays that combined publications, textual records, and varying forms of specialized media, such as maps, photographs, paintings, engravings, and three-dimensional artefacts. Coincidentally, the infamous Wolfe statuette can be seen in just such a display in the photograph below, taken around 1926, co-starring with Benjamin West’s painting The Death of General Wolfe in the Archives’ Northcliffe Room.

The Northcliffe Room in the Public Archives Building, Sussex Street. Ottawa, Ont., ca. 1926-1930. (a137713). The Vernon March statuette of Wolfe can be seen on top of the display case below the large painting on the right wall.

Housed in various spaces that included three custom-built rooms on the ground floor of the Archives building at 330 Sussex Street, the permanent exhibits were regularly supplemented by special displays marking commemorative events, the intake of significant acquisitions, or the visit of important guests. Space was tight, but under the guidance of Doughty and curators Mr. Weber and A.E.H. Petrie, nearly every usable surface was considered an opportunity to showcase the collection—even hallways and Doughty’s own office.

Minto Room, Public Archives of Canada, arranged for a reception for delegates attending the Imperial Conference – Ottawa, August 1932. (c000029) The sovereign’s throne [centre-right] was housed at the Archives Museum when not in use at the Senate of Canada. 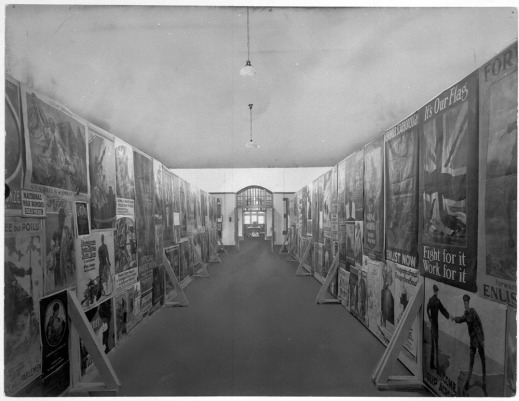 War Posters Room, Public Archives Building, Sussex Street, c. 1944 (a066638). We still find thumbtack holes in some of the war posters in LAC’s collections. Conservation and exhibition practices have greatly evolved since the days of the War Posters Room!

As a result, the Archives Museum hosted countless groups of schoolchildren, scholars, history enthusiasts and visiting dignitaries. The popular attraction was even graced by Princess Elizabeth and the Duke of Edinburgh in 1951. The royal couple enjoyed the experience so much that, as Archives officials proudly reported, “[by] the time the party had signed the visitor’s book and left for Government House, a much longer period had elapsed than had been arranged for in the official programme.” 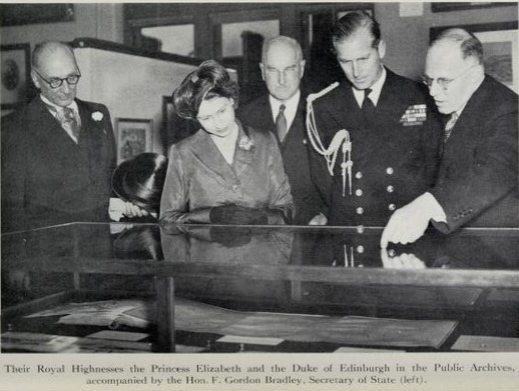 By the mid-1960s, the Museum’s popularity was growing by leaps and bounds. Unfortunately, as Mr. Petrie observed in 1960, this level of success did have its adverse effects: “One guard seems to be insufficient for the three rooms [as there have been] petty thefts and minor vandalism to collection items.” Security was struggling to keep up with growing crowds; perhaps these were the conditions in which the Wolfe statuette came to its unfortunate disappearance?

Ultimately, Doughty’s well-intentioned ambition could not keep going in this manner. After nearly 60 years of existence, the Museum had accumulated such a large three-dimensional collection that the Archives building, also the home of the National Library of Canada since 1953, was bursting at the seams trying to juggle the custody of museum, archival and library holdings. Space had become so tight that, in 1965, the exhibition spaces occupying the Sussex building had to be moved to temporary lodgings at the Daly Building, near the Château Laurier; so did the surplus artifacts that had until then been stored at the Loeb Building, on Besserer Street.

Appraisal of the Museum’s conundrum by both the Massey Commission of 1951 and the Glassco Commission of 1963 provided the necessary weight to the argument for downsizing. While the Archives had gone beyond their traditional role at a time when “no alternative was available,” it was obvious that being the national archives, the national library and a museum all at once was impossible and no longer necessary. The time had come to share the burden of responsibility with other existing institutions.

In 1967, the National Library and National Archives of Canada moved to new quarters, at 395 Wellington Street in Ottawa. While this modern, custom-designed building did include exhibition spaces, the displays of days past would not be replicated there; rather, focus would be dedicated to the wealth of resources found in the library and archives holdings.

The years surrounding the move were therefore occupied with the redistribution of the Museum’s collection. Most of the three-dimensional artefacts were transferred to the upcoming Museum of Man (now known as the Canadian Museum of History), while war trophies and military artefacts remained behind at the Sussex location to continue on as part of Canada’s War Museum. Approximately 16,000 coins and other monetary items were sent to the Bank of Canada, and the Archives’ philatelic holdings were taken in by the Post Office Department. The Archives retained its holdings of some 6,000 military, commemorative and ecclesiastical medals and tokens; these, along with the extensive collection of paintings, remained part of the Public Archives holdings of documentary art and objects. Mr. Petrie stayed on as Curator of Museum and Numismatics, showing groups around exhibits and paintings on display and conducting tours of the new building’s impressive decorative and architectural features.

As Library and Archives Canada evolves into the 21st century, the spirit of Doughty’s ambition and the legacy of the Archives Museum live on through a distinctly Canadian approach to archives. Bred out of collecting and caring for over 100 years’ worth of government records, private papers and non-textual “sources of every kind,” this approach has generated the eclectic array of expertise that remains with LAC’s professionals to this day. Most importantly, it has ensured that a diverse trove of documentary heritage continues to intrigue, inform and impress Canadians and visitors alike, even though security and access conditions have become just a bit tighter since the days of the Wolfe statuette affair.